What does the coronavirus mean for investors?

Financial markets have fallen sharply on concerns of the coronavirus, a respiratory illness first identified in Wuhan, China, spreading globally. While the headlines have been worrying, and no loss of human life is insignificant, it is important to understand the facts. The framework we have adopted for discussing this virus is to consider the three components of a pandemic—contagion, severity and treatment—and how the evolution of those components can shift the market narrative.

As of January 28, there are approximately 6,057 confirmed cases. While China is the epicenter of the virus, there have been 87 confirmed cases outside of China in 17 different countries and regions. As a point of comparison, the SARS (severe acute respiratory syndrome) outbreak in 2003 lasted about 9 months, from November 2002 to July 2003, with cases spanning 29 countries. While Chinese authorities have responded by placing over a dozen cities on lockdown, there have been a number of challenges in preventing the spread of the virus:

As we highlight in the below chart, the rising contagion level is what seems to have triggered uncertainty amongst investors.

There is no clear information on the actual severity of the virus. As of January 28, there are 132 confirmed deaths related to coronavirus; however, there are no details related to these deaths (e.g. age of patients, additional complications, how quickly they sought medical help). Historically, severity levels have varied dramatically. According to the World Health Organization (WHO), of the 8,098 global cases of probable SARS reported, there were 774 deaths, or a 9.6% fatality rate; meanwhile, the Swine Flu outbreak in 2009 had a much lower level of just 0.03%. Historical analysis related to pandemics is somewhat limited as each illness has its own unique components and considerations.

One promising sign is that there are 110 reported cases of patients presenting symptoms who have recovered and were discharged from the hospital. If severity does begin to rise along with contagion, then investor concerns may mount further as potential loss of life and economic damage rises.

It is possible to vaccinate against many viruses, but the development and roll-out of a potential vaccine can take time. At this stage treatment options are relatively unknown, adding to investor uncertainty.

On Monday, the Dow Jones Industrial Average fell more than 500 points, or about -1.5%, in the morning. Oil sold off about -3% and the U.S. 10-year Treasury fell to 1.61% by midday. At this point, the market is reacting to contagion, as we have seen identified cases rapidly increase, highlighted in the chart. What may exacerbate or alleviate the market reaction is how treatment and severity evolve. Although there is no treatment, there have been cases of people infected who have subsequently recovered. With respect to severity, whether this gets much worse or begins to abate, and at what pace, are key determinants of economic and market damage.

What we saw back in 2003 with the SARS outbreak is that it had the most significant impact on air travel, tourism, and domestic demand in Asia. Hong Kong, for example, experienced some of the most severe economic impacts, with its GDP growth falling by -0.5% y/y in 2Q 2003, and its retail sales declining by -7.7% y/y that quarter. However, it rebounded quickly as the new cases dropped and the Chinese government offered supportive economic measures. Across markets broadly, the S&P 500, the MSCI All-Country World, and the MSCI Emerging Markets indices (both in local currency and USD) were positive, and up double-digits in some cases, during the November 2002-July 2003 outbreak period, as well as the subsequent year following the outbreak. This indicates that prevailing market conditions and fundamentals have a more prominent influence on returns.

The coronavirus is likely to impact the economy and markets in similar ways, but to complicate matters, this outbreak coincides with the Lunar New Year in China, one of the most important holidays for travel and consumption. As mentioned above, the estimated 3 billion trips taken over this four-week period is likely to be negatively impacted by travel restrictions for 35 million people, and others canceling their plans. Already, travel was down -28.8% on the first day of Lunar New Year compared to the first day last year according to the Ministry of Transport. Additionally, last year Chinese consumers spent nearly $150 billion in just the first week of Chinese New Year according to the Ministry of Commerce, but this year, with many confined to their homes or unwilling to go out, consumption may also drop.

While impacts to the Chinese economy, which has already faced headwinds from slowing global and domestic demand and external trade pressures, are likely to be the most pronounced, for U.S. investors, markets may be more likely to stabilize, as we have seen few protracted market declines due to health crises , geopolitical risks, natural disasters or political turmoil. 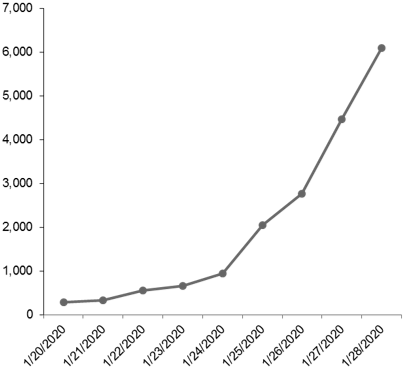 Source: The Center for Systems Science and Engineering (CSSE) at Johns Hopkins University. Data are as of January 28, 2020.