1Q20 earnings season will provide an important first look at how the ongoing pause in global activity is impacting corporate earnings.

Floating in a most peculiar way

Global stock markets saw an unprecedented level of volatility in March, as investors attempted to discern how the rapid spread of COVID-19 would affect the economy and corporate profits. The past few weeks have seen a handful of companies attempt to provide insight as to how things will evolve, but for the most part, it appears that managements are flying blind. As a result, the 1Q20 earnings season will provide an important first look at how the ongoing pause in global activity is impacting corporate earnings and what investors should expect over the remainder of the year.

We anticipate the current recession will be short but deep, likely taking on a “U” shape. Growth appears to have contracted in the first quarter, but this contraction will pale in comparison to the sharp annualized decline of -25% that we expect in 2Q20. From there, a more modest decline in growth during the third quarter, followed by a gradual acceleration into the end of the year, seems like a reasonable assumption. That said, the “short but sharp” nature of this recession will not minimize the overall impact on corporate profits. The key risk is how long the downturn lasts; assuming it does not extend well into 2021, companies may be able to take steps that allow them to rebound more strongly when the clouds eventually begin to break. 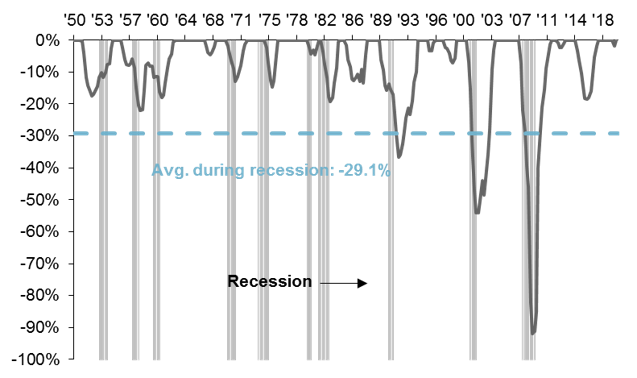 With earnings season underway and 12% of market cap reporting, we expect 1Q20 S&P 500 operating earnings to be down -14.6% from a year prior. Thus far, 68% of companies have beaten earnings estimates, while 59% of companies shave beaten revenue estimates; beat rates will likely come in below their long-run averages when all is said and done, particularly given the glacial pace at which consensus estimates have been adjusting. At the current juncture, Standard & Poor’s expects 2020 operating earnings per share to come in at a level of 146.57 USD, representing a -6.7% contraction from a year prior. This stands in contrast to pro forma estimates, which suggest 2020 earnings will decline -11.9% in 2020 to a level of 146.57 USD. We are less optimistic, and believe earnings will contract -20% this year; in our opinion, consensus has some catching up to do.

This decline in earnings is being driven by a combination of both softer revenue growth and deteriorating profit margins, although we expect that profit margins in certain sectors could prove to be more resilient than expected. Unlike the financial crisis, the impact of this downturn on the economy will be far greater than the impact on S&P 500 companies; that said, there is not a good playbook for thinking about how things might evolve, meaning that many investment decisions will have to be made in real time.

Part of what makes the current situation so unique for corporations is that the spread of the virus is impacting both supply and demand. Only a handful of corporations have revised 2020 guidance, with many stating that it is too difficult to precisely quantify the impact of the virus at the current juncture. That said, parsing recent corporate filings does provide some insight regarding the key issues facing companies at the sector level (EXHIBIT 2). 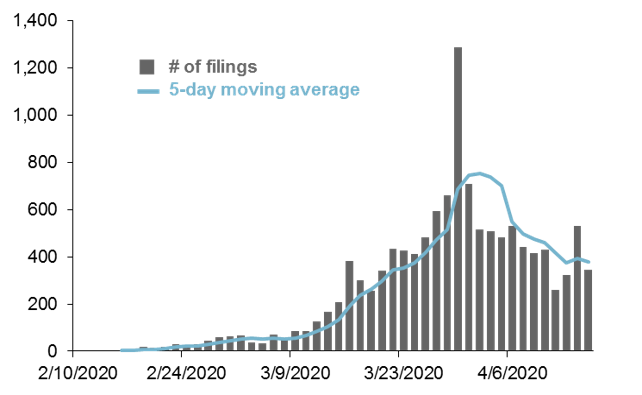 As usual, financial services companies have kicked off the earnings season, and most of the names that have reported thus far have missed estimates due to a larger than expected build in loan loss provisions. That said, banks experienced better than expected capital market activity despite elevated levels of volatility at the end of the quarter, and the question going forward will be whether banks see sufficient loan volume to offset the decline in net interest margins. A big part of the thesis behind investing in financials has been their attractive shareholder yield; while most banks have suspended their buyback programs, the dividends still appear relatively safe.

Turning to the consumer sectors, the impact of COVID-19 looks set to be mixed. Consumer discretionary should be hit harder than consumer staples, but the impact will not be uniform across the board. Within the consumer discretionary sector, autos, hotels, restaurants and leisure, as well as traditional retailers, which account for nearly half of the sector’s market cap and nearly 5% of the S&P 500, should all see a negative impact from social distancing; on the other hand, internet retailers and other industries more oriented toward consumption at home should actually benefit. Turning to consumer staples, there seem to be a handful of offsetting forces at work. Not unlike some companies in the consumer discretionary sector, supply chains have been affected as economies have shut down to try and slow the spread of COVID-19. At the same time, however, demand for things like household products has been robust. We expect that both sectors will see earnings decline relative to a year prior, but the decline in consumer staples will be far more contained.

Communication services is one of the few sectors expected to see positive earnings growth on a year-over-year basis. However, there will be a significant difference at the industry level – those companies most levered to the digital economy (interactive media & services, as well as various entertainment companies) look set to post solid results, while those businesses that rely on a more diversified product mix (for example, both media and theme parks) likely suffered. The technology sector looks to have had had a similar experience; the performance of hardware companies should be mixed due to supply chain issues, while software companies seem to have thrived due to an increase in the number of employees working remotely and the corresponding increase in demand.

This leaves us with the energy, real estate, industrial, and material sectors. Industrials look set to struggle not only because of what is happening with the airlines, but also due to the fact that many projects that require industrial machinery have been put on hold. Materials should see less of an impact, but will still be hurt by the overall deceleration in global demand. Real estate is at risk of seeing rent payments temporarily dry up, which could not only reduce investor appetite for these securities, but simultaneously make debt service more difficult.

As seen in EXHIBIT 3, energy companies look set to struggle the most in the coming months. Not only was the average price of WTI oil during the quarter down -16% from a year prior, it currently sits at around 20 USD/bbl, a level where most producers struggle to turn a profit. Combine this dynamic with softer demand and the aggressive use of leverage in recent years, and energy sector profitability should remain under pressure for the foreseeable future. 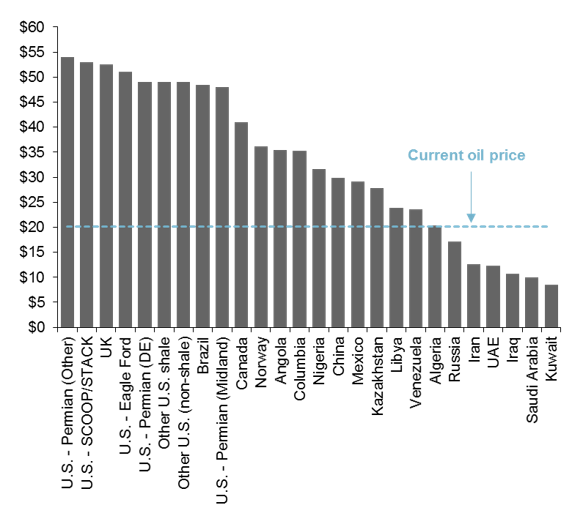 Your margin’s gone, there’s something wrong

The earnings outlook is not great, but markets are forward looking. As we get a better sense of when the economy will come back online, markets will start to focus on the rebound in profits and a more normal growth environment. As the economy comes back online, it will be those companies that are able to quickly get back up and running which will thrive. The ability to do this will depend on whether companies are able to control costs and maintain some semblance of productivity in the coming months.

Margins are a function of input costs, wages, and productivity; on average, they fall by 4%-pts during economic recessions. This is usually due to a substantial decline in revenues against a backdrop where costs are slow to adjust. However, given an expectation that this recession will be short but deep, will businesses be able to offset some of this margin pressure until revenue growth reaccelerates?

When we think about the cost side (inputs and wages), companies with the lowest costs – defined as cost of goods sold (COGS) + selling, general & administrative (SG&A) – as a share of sales, seem to be in the best position to absorb the shock from COVID-19 (EXHIBIT 4). In this analysis, we assume that COGS are variable costs, while SG&A are fixed costs. Among those businesses, companies with the lowest COGS as a share of sales are arguably the most productive. In many cases they have higher overhead (SG&A % sales), but are in a better position to maintain day-to-day operations in an environment of social distancing, as their output is not as dependent on workers being in a physical location.

In general, companies where SG&A represents a greater share of sales tend to be capital-lite service businesses, while those businesses with a higher COGS/sales ratio tend to be more capital intensive. It is far easier for capital-lite businesses to stay up and running in the current environment, particularly given that human capital is one of their biggest assets; furthermore, as revenues come under pressure, reducing headcount is much more straightforward than shutting down a plant or liquidating a physical asset. Capital intensive businesses, on the other hand, need people present in specific locations in order to generate products and services. This, along with the fact that they tend to be less productive in general, means they should see a greater impact from social distancing. 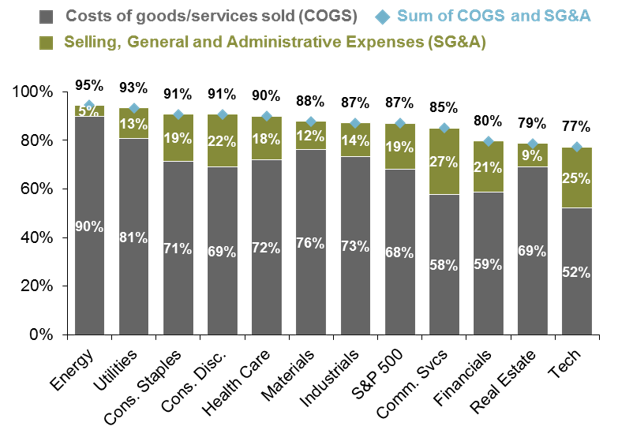 At the end of the day, businesses that are able to adjust cost structures as needed, while simultaneously maintaining some element of productivity, should see less downward pressure on margins. This could lead to an improvement in earnings as the “U” shaped recovery takes hold. On the other hand, those businesses that are forced to essentially shut down will see margins collapse, making future earnings growth more dependent on a reacceleration in revenues.

I think my portfolio knows which way to go

There is a massive amount of uncertainty surrounding the direction of travel for the economy in the coming months, and the first quarter earnings season will provide a first look at the impact of COVID-19 on the corporate sector. Equity markets seem to be a bit ahead of themselves, and while stocks look attractive relative to bonds, they are not necessarily cheap relative to long-term averages. Until we see consensus earnings estimates become overly pessimistic, it feels like the risks remain tilted to the downside.

As such, we continue to advocate for a focus on quality with a dash of cyclicality. This means embracing sectors like health care, technology and consumer staples, and taking advantage of underweights in highly-levered sectors like energy and REITs to maintain benchmark exposure to sectors like financials (EXHIBIT 5). This should allow portfolios to weather the storm in the short/medium term, while simultaneously maintaining enough cyclicality to participate when markets do rally. There will come a time to take a more offensive stance, but it seems a bit premature at the current juncture.

EXHIBIT 5: BREAKDOWN OF RETURN ON EQUITY (ROE) BY SECTOR 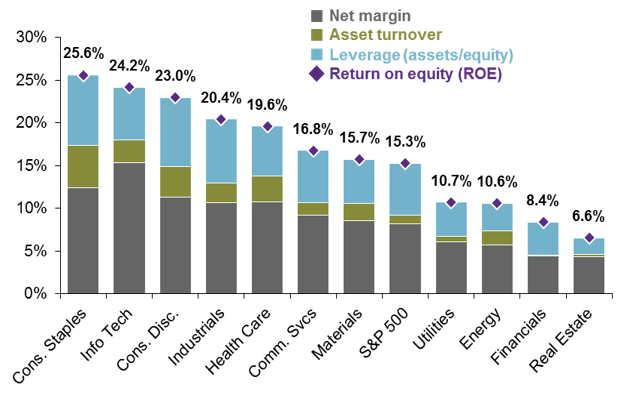