Our September Investment Quarterly (IQ) was held in London during a period of high emotion in both the markets and the city itself. The markets were wrestling with a spike in inflation and an aggressiveness in central bank rate hikes last seen in the early 1980s. Meanwhile, the city was in a period of mourning following the passing of Her Majesty Queen Elizabeth II and her 70-year reign. Being in London at this time provided quite the opportunity for reflection.

The conversation around the economy and the markets was lively. There were those whose experience went back to the early 1980s who believed the very operating model of central banks causes sequential bubbles. They felt the central banks were committed to withdrawing the excess that had been injected into the system over the last few years and would consequently burst whatever bubbles had formed, making a deep recession unavoidable. The more current school of thought was that Modern Monetary Theory (MMT) was a permanent feature that would cushion the economy to the downside; both monetary and fiscal policymakers would look to protect businesses and households, allowing only a shallow recession at worst. In the end, the group felt the best way to position portfolios was to lend to borrowers we felt would comfortably survive a significant inflation-led downturn ... effectively building our portfolios with fortress balance sheets for our clients.

The core of our meeting was spent on trying to understand where inflation was headed, how the labor market fit into the equation, what the central banks would do in response to higher inflation and what that would mean for the economy and markets. It was very difficult to be too sanguine on inflation.

Without a resolution to the war in Ukraine, energy and food prices were unlikely to come down without government subsidies. Further, the cost of shelter in the U.S. should remain structurally supported by a historic underinvestment in the residential sector, with estimates of the current shortage as high as 3 million units.

Tight labor markets in the U.S. and UK imply that wage gains are likely to be persistent. Already, workers are beginning to take industrial action, as their real pay is not keeping up with the cost of living. The current data in the U.S. shows that there are still 11 million job openings available to the 6 million unemployed. Higher wages will ultimately reinforce higher prices in housing, goods and services.

The tone from the central banks has become extremely hawkish as they acknowledge inflation and the lessons learned from the 1970s and ’80s. It is our view that the Federal Reserve (Fed) will continue to raise the fed funds rate until it exceeds a range of both headline and core inflation measures. There has been no point in the Fed’s modern history where it has ended a rate hiking cycle at a negative real fed funds rate. We believe policymakers will need to raise rates from the current 2.375% to at least 4.75% in the near term.

This is not to say that everything is bleak. U.S. and European corporate balance sheets remain surprisingly strong despite the higher rate environment and increase in input costs. The U.S. consumer and state and local governments have excess savings built up in deposit balances and rainy-day funds, respectively. Fiscal aid has been deployed to help offset the cost of higher energy.

Recession (raised to 50% from 25%) became our base case for the direction of market sentiment over the next three to six months. The August central bank conversations at Jackson Hole were consistent in identifying inflation as the main threat and indicating that pain would be felt by both businesses and households. We believe that central banks cannot once again take the risk that inflation will be transitory and should not allow the official rate to remain below the level of inflation. Both the economy and markets will suffer from aggressive rate hikes and liquidity withdrawal. Crisis was increased to a 15% probability from 10%. Fighting a 40-year high in inflation with the most aggressive rate hikes in 40 years, while simultaneously trying to withdraw some of the USD 9 trillion in quantitative ease injected during the pandemic, may just prove to be more than the global economy and markets can handle.

Sub Trend Growth was reduced to 30% from 45%, and Above Trend Growth was reduced to 5% from 20%. There is some reasonable possibility that a soft landing will occur, driven by fiscal policy and energy subsidies. In a tight labor market with businesses and households heading into the slowdown with strong balance sheets, it’s possible there may even be an upside surprise. That would likely be driven by an mRNA vaccine in China and/or a quick resolution to the war in Ukraine, which would alleviate pressures on the natural gas and fertilizer markets.

The primary risk to our forecasts is severe stagflation. The market is expecting the combination of higher rates and balance sheet reduction to slow the economy and inflation enough that central banks start cutting rates by the middle of 2023. It is very possible, however, that the central banks will need to raise rates higher and for longer than the market is anticipating to effectively lean into growth and inflation pressures. Even more concerning is if a weakening labor market is ineffective in bringing inflation down. Fed Chair Jay Powell is going out of his way to urge investors to revisit the experience of the late 1970s. If central banks have to exceed market expectations, the ultimate recession would be deeper, and asset prices would have to deflate further.

The evolution since June’s IQ has been in line with our expectation for a rising probability of recession from 5% to 50% over the last three quarters. We continue to use market rallies to reduce both our interest rate exposure and our credit risk. High quality, short-dated cash flows remain our favorite. Investment grade credit with one- to two-year maturities and higher quality securitized credit both yield around 4.5%–5% and provide enough yield to protect the portfolios from rate rises in the front end of the yield curve. Our highest conviction short is the front end of the German bond market.

There was considerable discussion about local emerging market (EM) debt. The significant amount of rate hikes across emerging economies since the start of 2021 has left those markets with high real yields … a stark contrast to the negative real yields in the developed markets. Currency stability vs. the USD would be the last ingredient needed to drive significant allocations to those markets.

We have spent most of 2022 ensuring that every single holding in our portfolios could survive a material downside shock. While prices have reset lower, there is still plenty of liquidity in the market for now. But what if, with the benefit of hindsight, the first nine months of 2022 prove to be the calm before the storm and a period of rational repricing to a coordinated central bank pivot to monetary tightening? And what if the real disorderly pain isn’t felt until we are into a recession? For us, the best strategy is to build our portfolios to mirror a fortress balance sheet.

Every quarter, lead portfolio managers and sector specialists from across J.P. Morgan’s Global Fixed Income, Currency & Commodities platform gather to formulate our consensus view on the near-term course (next three to six months) of the fixed income markets.

In daylong discussions, we review the macroeconomic environment and sector-by-sector analyses based on three key research inputs: fundamentals, quantitative valuations, and supply and demand technicals (FQTs). The table on the next page summarizes our outlook over a range of potential scenarios, our assessment of the likelihood of each, and their broad macro, financial and market implications. 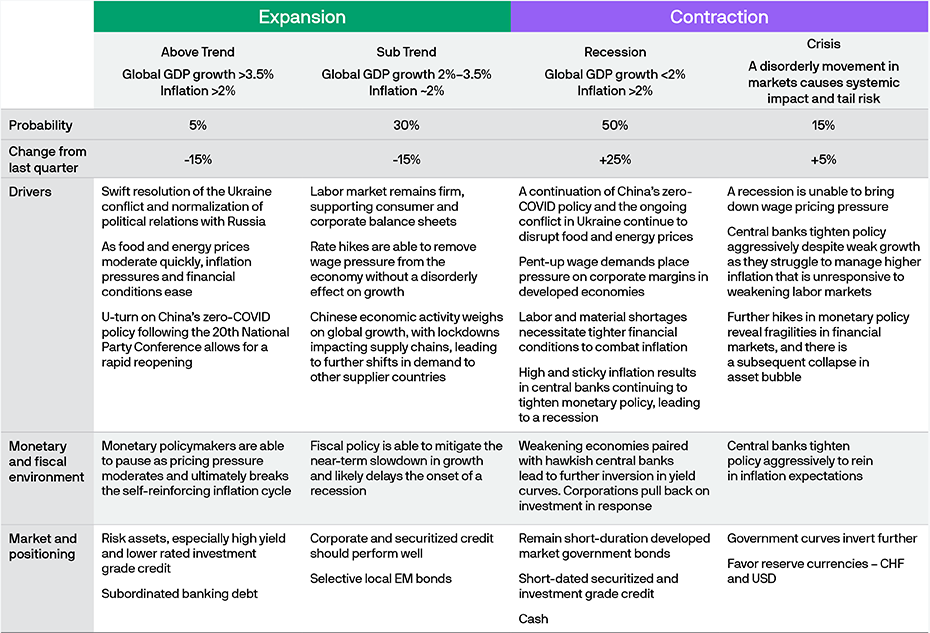 Source: J.P. Morgan Asset Management. Views are as of September 14, 2022.
Opinions, estimates, forecasts, projections and statements of financial market trends that are based on current market conditions constitute our judgment and are subject to change without notice. There can be no guarantee they will be met.

Please be aware that this material is for information purposes only. Any forecasts, figures, opinions, statements of financial market trends or investment techniques and strategies expressed are, unless otherwise stated, J.P. Morgan Asset Management’s own at the date of this document. They are considered to be reliable at the time of writing, may not necessarily be all-inclusive and are not guaranteed as to accuracy. They may be subject to change without reference or notification to you. JPMorgan Asset Management Marketing Limited accepts no legal responsibility or liability for any matter or opinion expressed in this material.
The value of investments and the income from them can fall as well as rise and investors may not get back the full amount invested. Past performance is not a guide to the future.

We have built and evolved our fixed income capabilities with just one aim: to build stronger portfolios that solve our clients’ needs. Today we are one of the top fixed income managers in the world.