2022 was a difficult year. The war in Ukraine and central banks’ battle against inflation have been the main sources of bond and equity markets’ struggles. However, the final quarter of the year has at least brought some relief.

Value stocks have significantly outperformed growth stocks, both this year and over the quarter. This can largely be explained by the high starting valuations for growth stocks, some growth disappointments, and the effect of rising interest rates. At the start of 2022, the valuation of growth stocks had reached frothy levels, with the MSCI World Growth Index trading at 31 times expected earnings, compared with only 14 times expected earnings for the MSCI World Value Index. By the end of the year, the valuations had fallen to 21 and 12 times respectively. This still leaves growth stocks looking somewhat expensive by historic standards, whereas value stocks look fairly cheap. 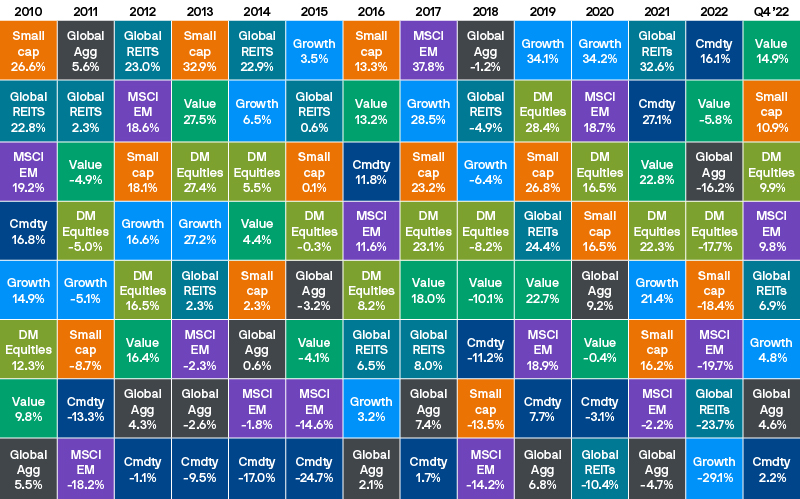 Arguably the most painful move in markets has been the sharp decline in government bond prices. We all know that stocks can provide a bumpy ride but the unusually large sell-off in government bonds, alongside falling stock prices, left investors with no port in the storm. This was caused by central banks having to raise interest rates by far more than investors had expected at the beginning of the year because of runaway inflation. The UK government bond market was particularly hard hit, falling by 25% over the year. Flexible fixed income managers who successfully anticipated the need for interest rates to rise have significantly outperformed this year. 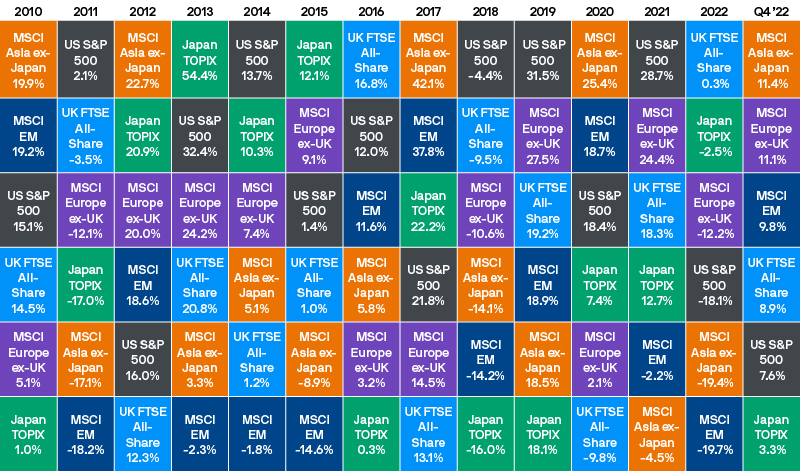 Source: FTSE, MSCI, Refinitiv Datastream, Standard & Poor’s, TOPIX, J.P. Morgan Asset Management. All indices are total return in local currency, except for MSCI Asia ex-Japan and MSCI EM, which are in US dollars. Past performance is not a reliable indicator of current and future results. Data as of 30 December 2022.

In our 2023 investment outlook "A bad year for the economy, a better year for markets"we argued that a moderate recession is likely next year but it had already been largely priced in by equity markets in 2022. Looking at the returns of the FTSE All-Share though you might think that wasn’t the case.

The UK stock market has outperformed its peers this year. It has been helped by its large exposure to commodity producers and defensive consumer staples and its low exposure to expensive technology companies. The decline in sterling has also helped, given that about 75% of the FTSE All-Share’s revenues come from outside the UK. The fall in the pound has also helped flatter international stock market returns somewhat when translated back into sterling.

Nevertheless, the UK stock market has not been blind to the risks to the economic outlook. The more domestically orientated FTSE 250 Index has fallen nearly 20% year-to-date (ytd) and UK retailers are down 35%.

Japanese stocks, which held up well in local currency terms, have also been flattered by the sharp decline in the yen against the dollar this year, boosting the local currency value of their foreign earnings.

One might also look at the return of value stocks and argue that they aren’t pricing in much recession risk. However, value returns have been supported by the outperformance of more defensive sectors such as healthcare, consumer staples and utilities, along with the strong returns for energy stocks. Nevertheless, some cyclical value stocks have fallen a long way already. For example, with US banks having declined almost 30%, it’s hard to argue that the market doesn’t already know that some economic weakness is on the way. 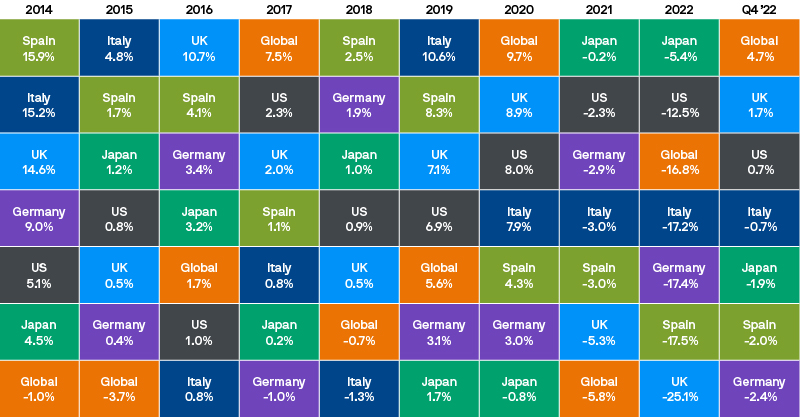 One part of the world where few would argue that a lot of bad news has already been priced in is in China. The MSCI China Index is down 50% from its 2021 peak and down 22% ytd. That’s despite a 34% rally off of the recent lows since October, as China looks to move beyond its zero Covid policy.

So, despite some relief in the fourth quarter, 2022 will mainly be remembered as a year when markets priced in the unpleasant consequences of higher inflation and interest rates, which are likely to hit the global economy in 2023. On the plus side, with a recession now widely expected and markets already starting to anticipate a decline in inflation and a peak in interest rates, 2023 could be a better year for both bonds and stocks. 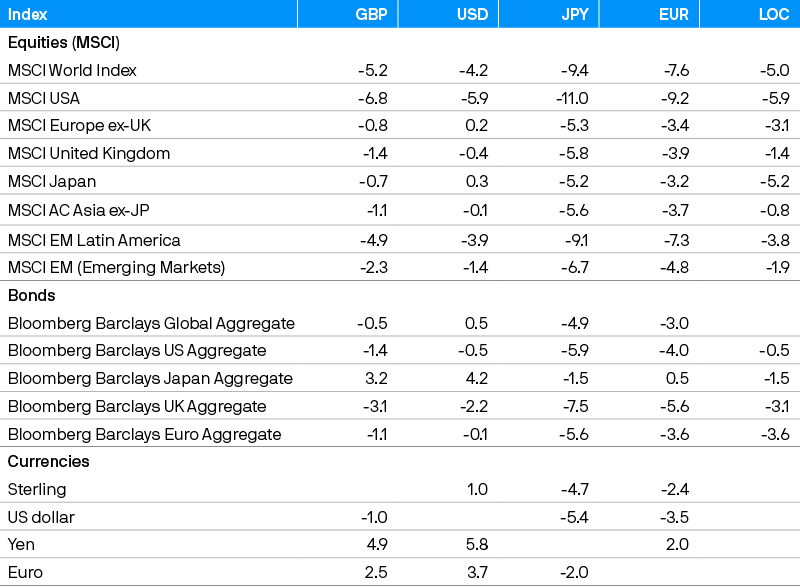 Source: Bloomberg Barclays, MSCI, Refinitiv Datastream, J.P. Morgan Asset Management. Past performance is not a reliable indicator of current and future results. Data as of 30 December 2022.