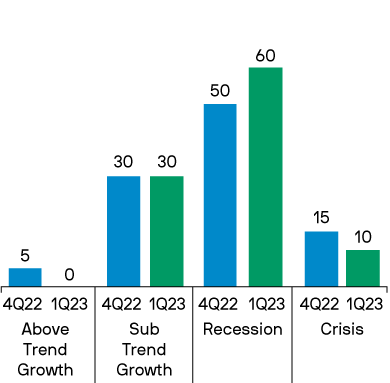 Our December Investment Quarterly (IQ) was held in New York during the knockout rounds of the World Cup … coincidently, after a year of bond investors getting knocked out by the combination of higher inflation and aggressive central bank policy tightening. The mantra going into our meeting was to survive and progress: get through the wave of bond market repricing by protecting our clients’ capital, and then to have a plan in place to take advantage of that repricing over the next few quarters.

Not surprisingly, the group was divided on whether we would see a soft landing or, instead, go through a meaningful recession. Those in the recession camp pointed to the inversion of the yield curve and the impact that the variable, cumulative and lagged effects of central bank rate hikes have historically had on the economy. Those in the soft landing camp pointed to a decline in some inflation measures and a firm labor market. Stay tuned to see which camp emerged as the front-runner to take home the cup!

The aggressive central bank rate hikes finally seem to be biting into inflation. Goods inflation has clearly turned down, rental prices are moderating, and energy prices have stabilized. This should be a signal to central banks that the vast majority of the rate hikes are behind them.

We expect the Federal Reserve (Fed) to raise rates another 75–125 basis points (bps) over the next several meetings: 50bps in December, followed by a string of 25bps hikes, depending on how many are needed to moderate core inflation. Neither the monthly rate of core inflation nor the trailing 12-month rate seems to be an appropriate measure. A rolling three-month annualized rate of core CPI and core PCE would give the Fed more current information on the effectiveness of its rate hikes. By that metric, core CPI is currently at 5.7% and core PCE is at 4.9%. We expect both of these measures to be below the fed funds rate and approaching 4% by the time the Fed looks to pause in Q1. It’s unlikely the Fed would even consider cutting rates before core inflation falls toward 2%–2.5%.

The question is: Can the Fed raise rates to a level that will bring down inflation to its target of 2% without causing a recession? At our December meeting, there was some conversation about what a reopening of China might do to the global economy. Could it counterbalance the economic slowdown in the U.S. and Europe? Our concern was that it might add to inflationary pressures, as increased consumption would lead to more commodity imports. There was also some discussion about stronger balance sheets in the business and household sectors going into the slowdown. We felt they might cushion the depth of the recession but not necessarily prevent one.

The greatest support for a soft landing looked to be coming from the labor market. Unemployment is very low, wages are going up, and the consumer is able to keep spending. But we worried this would not be sustainable. For the Fed to bring core inflation down to 2%–2.5%, wage growth needs to come down, which means unemployment has to go up, which means a recession is necessary.

Recession (raised to 60% from 50%) remains our base case for the direction of market sentiment over the next three to six months. The Fed is raising rates at the fastest pace since 1980, the rest of the world is following its lead, quantitative tightening is in its early stages, and inflation remains painfully high. It seems very aspirational to assume all this can end in a soft landing.

Sub Trend Growth was unchanged at 30%. This soft landing scenario needs the Fed to pause at around current levels, inflation to fall to its target and the labor market to remain firm. The Fed did pull off a soft landing in 1994–95, so there is some evidence of aggressive rate hikes working.

We reduced the tail risks of Above Trend Growth (lowered from 5% to 0%) and Crisis (lowered from 15% to 10%) to fund our higher conviction in Recession. Peace across Europe and a widespread opening in China seem to be the minimum needed for a growth re-acceleration, while the risks of a disorderly, hard landing should be mitigated by the approaching end to central bank rate hikes.

The primary risk to our forecast is that the Fed gets to 5% and pauses in Q1, but inflation flares up and policymakers have to restart rate hikes, heading to 6% and higher. The entirety of the current debate in the market centers on predicting a soft landing or estimating how deep a recession might be. There is no discussion of what a prolonged period of high inflation might provoke in policy response and how markets would react. Certainly, a broad Chinese consumption surge in a world of limited labor and resources that causes inflation to stay elevated would worry policymakers and might cause them to withdraw even more accommodation.

The top idea coming out of our meeting was to use every backup in yields to add high quality duration to portfolios. The evidence is clear that, historically, yields peak somewhere at or before the last rate hike. Bond yields then tend to fall very quickly, especially at the front end of the yield curve. We know from client conversations that there is tremendous interest in adding broad market bonds to their portfolios. Much client money currently sits in cash or in bond portfolios that are positioned shorter relative to their duration targets.

After the most painful bond market returns in history, relief is on the horizon. There are a couple months ahead to buy high quality bonds on any backup in yields. After that, investors will be chasing them for the next couple of years. After years of TINA (There Is No Alternative … to equities), bonds are back! Think: Fixed Income’s Fashionable Again!

Every quarter, lead portfolio managers and sector specialists from across J.P. Morgan’s Global Fixed Income, Currency & Commodities platform gather to formulate our consensus view on the near-term course (next three to six months) of the fixed income markets.

In day-long discussions, we reviewed the macroeconomic environment and sector-by-sector analyses based on three key research inputs: fundamentals, quantitative valuations, and supply and demand technicals (FQTs). The table below summarizes our outlook over a range of potential scenarios, our assessment of the likelihood of each, and their broad macro, financial and market implications. 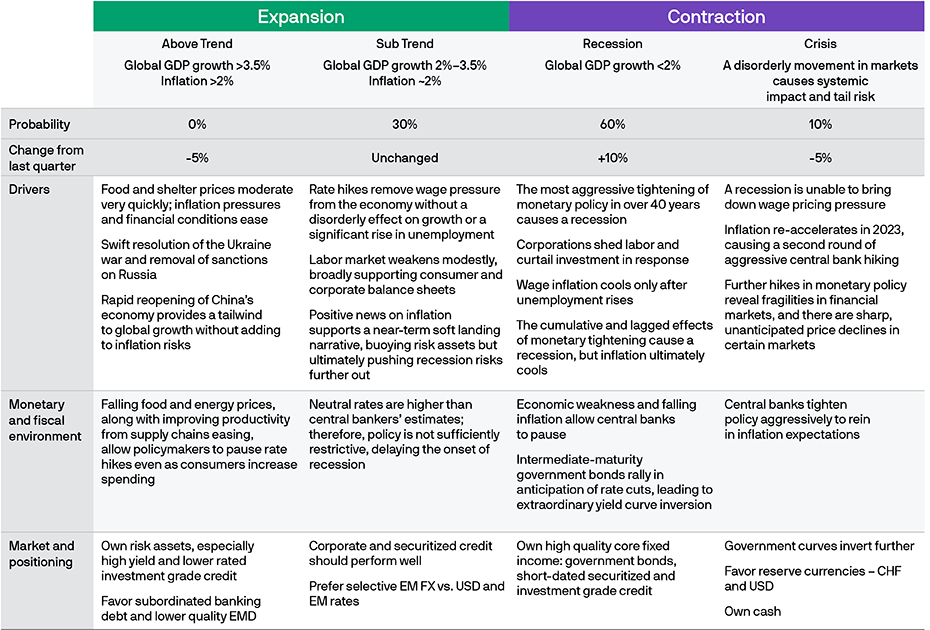 Source: J.P. Morgan Asset Management. Views are as of December 7, 2022.
Opinions, estimates, forecasts, projections and statements of financial market trends that are based on current market conditions constitute our judgment and are subject to change without notice. There can be no guarantee they will be met.

We have built and evolved our fixed income capabilities with just one aim: to build stronger portfolios that solve our clients’ needs. Today we are one of the top fixed income managers in the world.