What does the Fed want?

The major uncertainty hanging over financial markets concerns the relationship between inflation, growth, and monetary policy. With the U.S. economy overheating, the Federal Reserve is raising interest rates and shrinking its balance sheet, looking to steer inflation toward its 2% target. In recent months, it has seemed increasingly evident that bringing inflation down will require a period of fairly slow growth, one that generates some loosening in the labor market. Such episodes, though, have not occurred very frequently outside of recessions. Understanding the shifting probabilities that the Fed succeeds in its efforts, and its reaction function to incoming information, will play a dominant role in determining tactical asset allocation decisions during the next year.

The inflation picture has changed significantly in recent months. What began primarily as a shock to goods prices, caused by a sudden surge in consumer demand for physical products at a time when factory output faced tight constraints, has broadened into a generalized overheating process. A tight labor market has put upward pressure on wages, and services inflation has accelerated as a result. Core goods prices (excluding food and energy), meanwhile, are no longer rising sharply, but they have disappointed earlier expectations that they might fall this year.

As the Fed evaluates inflation in coming months, we think it will emphasize the sequential run-rate rather than year-on-year figures. While those annual inflation numbers have started to fall, the monthly pace of inflation continues to run well above the Fed’s target. Indeed, the average core inflation rate between February and April annualized to 5.8%.

Particular and broad-based strength has appeared in services prices (Exhibit 1). All five of the components that we track within services are running over 5% on that three-month-annualized basis. While the Fed would welcome a drop in overall inflation owing to a downward correction in goods prices, it would likely continue to worry if services inflation persisted at such a rapid clip.

All five of the major components of services inflation have recently been rising at above a 5% annualized pace. 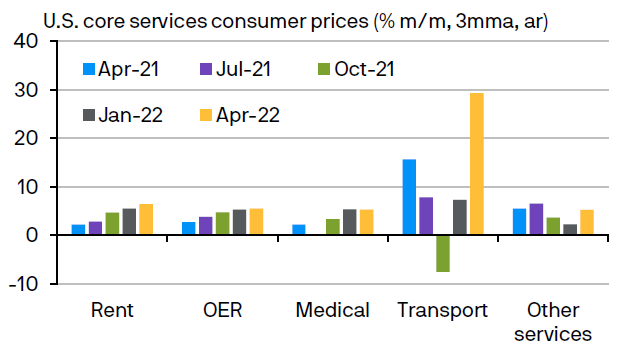 One complication surrounding inflation data concerns the divergence between consumer price inflation and the personal consumption expenditures (PCE) deflator. The latter – the measure that the Fed targets – has cooled much more significantly than the consumer price index (CPI). When April data are published, they will likely show a three-month run-rate marginally above 3%, within shouting distance of a pace that the Fed could tolerate.

We will be looking for guidance from members of the Federal Open Market Committee (FOMC) about how they perceive the CPI-PCE split. Most likely, they will place some emphasis on each. While their specific targeting regime only applies to the PCE deflator, the CPI occupies far more space in the public’s consciousness, and likely plays a role in shaping inflation expectations.

The current breakdown of inflation, combined as it has been with strong wage gains, suggests that pressure will not dissipate on its own. To defend its target, then, the Fed will seek to engineer a period of weaker growth. The tightening in financial conditions that has occurred this year, in response to the FOMC’s increasing hawkishness, seems likely to produce just such an outcome. Bond yields have risen, equity valuations have dropped, corporate credit spreads have widened, and the dollar has risen.

As a result, financial conditions indices have moved to a degree that has been historically associated with growth slowdowns of about a percentage point, with a lag of two to three quarters. Given a current underlying growth rate of around 2%, on our estimates, this tightening points to sub-trend growth of roughly 1% by early 2023. If sustained, that pace would likely produce some easing in labor market conditions and might therefore succeed in cooling inflation.

If, as seems likely, the Fed feels comfortable with the move in financial conditions that has already occurred, how will it proceed in coming months? We think it will focus, for the time being, in delivering the path of interest rate hikes that the market has priced, raising the fed funds rate to roughly 2.75% by the end of this year. In the absence of other new information, that course of action would likely leave financial conditions broadly unchanged, consistent with sub-trend but not recessionary growth over the medium term.

Should financial conditions begin easing, however – via a valuation-driven rally in equities alongside a fall in bond yields – we would expect a hardening of FOMC rhetoric. In that sense, while the “Fed put” that markets used to count on likely still exists – albeit at stock market levels considerably below today’s – there may also now be a “Fed call.” In this scenario the FOMC would attempt to offset market moves that seem to conflict with its tightening goals. The Fed would not necessarily lean against any move higher in stocks – especially if price appreciation reflected higher earnings expectations. But if, say, investors once again pushed up valuations for profitless companies, the Fed would take notice.

Where will tighter financial conditions show up? We think housing activity will be the first to feel a chill, and indeed that process may already be underway. The Homebuilders survey has fallen in each month of 2022, with a particularly sharp decline in the May reading. Sales have also slowed. Very low inventories will likely keep new home construction ticking along for a while yet. But residential investment has likely already made its largest contribution to growth for this expansion. At the margin, capex may also show some cooling, although it has not displayed much interest sensitivity in the past. Companies have mostly been financing investment out of cash flow rather than borrowing.

As we monitor risks of a steeper and more generalized downturn, we will be looking at home prices – where declines would undermine the currently very favorable position of household balance sheets – as well as layoffs. Consumers have navigated the inflation shock well, thanks to strong income growth, and any prospect of employment insecurity could produce a precautionary rise in saving. We will also keep an eye on capex plans. Surveys suggest companies currently expect an above-average rate of capex growth in coming quarters, presumably in response to strong profitability and elevated capacity use. If capex growth expectations suddenly fall, it might signal a broader pullback in expansionary behavior.

Tighter financial conditions generally spell trouble for asset markets, and as we’ve discussed there may be a more of a closed loop in place than we’ve seen for some time. While the Fed is intently focused on inflation and inflation expectations, it is also implicitly counting on financial markets to pass along its intended tightening. Should credit or mortgage spreads start to tighten meaningfully and offer too much relief to end borrowers it would simply prompt the Fed to double down its efforts.

Objectively, the drop in asset prices has already discounted a lot of the Fed’s planned actions and a marked slowing in economic growth. Given prevailing indications of 2022 nominal GDP and expectations that 2023 will deliver sub-trend growth but cooler inflation, we see S&P 500 earnings growth in upper single digits this year and mid-single digits next year. This would in turn put the index on around 17x forward earnings. With valuations reasonable but growth unspectacular, equities seem prone to overshoots in sentiment – in both directions.

For the moment, we remain broadly neutral on equities but note that the skew of risks remains somewhat tilted to the downside. However, to enter a more bearish allocation we would need to see the odds of recession rising further than is currently supported by activity or earnings data. Signs that the Fed is losing its inflation battle – necessitating yet more aggressive tightening – could equally argue for an outright underweight stance. For now, the jury is still out on this subject.

Credit spreads have widened meaningfully, and all-in yields in U.S. high yield at around 7.5% are attractive in our no-recession base case. The low level of near-term refinancing risk further supports credit. But should recession odds pick up, then credit, like equities, would likely be hit. With U.S. 10-year yields now at around 3%, we see more two-way risk in duration. We maintain some modest underweights to bonds. But given increasing concerns about growth – and the downward drift in inflation we expect in the second half of 2022 – bond yields may yet come under some pressure.

On balance, the policy feedback loops, and prevailing levels of valuations, spreads and yields, argue against large, high-conviction directional calls. For now technical factors – positioning, sentiment, etc. – may well drive markets more than fundamental factors like earnings growth. Not least as the Fed’s fight against inflation is still ongoing, and the outcome is as likely to be a points decision as a knockout punch. 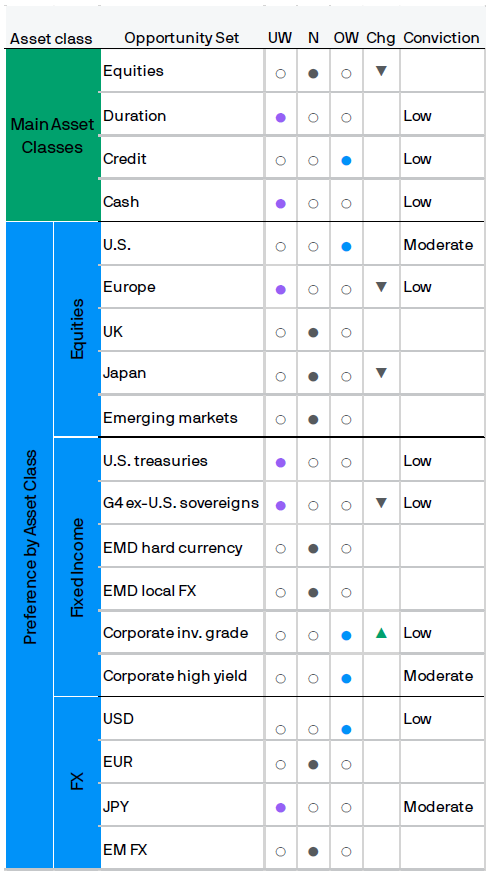 The tick chart and views expressed in this note reflect the information and data available up to March 2022.