The U.S. Federal Reserve (Fed) is on track to reduce its asset purchases by the end 2021. Many investors are curious about the potential impact on Asian assets, both equities and fixed income. With the previous quantitative easing (QE) tapering taking place at the end of 2013, looking back to the 2014 market performance is a useful starting point. However, investors should also note there are some significant differences to the present situation.

In 2014, MSCI Asia Pacific ex-Japan generated a 3.1% return, underperforming the S&P 500, which rose 13.7%. However, there was considerable variation within Asia. The China onshore market was going through a spectacular rise led by retail investors, with the CSI 300 up 52% in the year. India and Taiwan also produced double-digit return. In contrast, South Korea was down 10.7% in the year. This shows the importance of domestic factors in driving individual market performance amid the U.S. monetary policy shift.

This would be a critical consideration in 2022 as Asian economies look to recover from the pandemic. In the past 18 months, tech exports, especially in northeast Asia, have been a key driver to growth. With vaccination rates picking up across Asia, the region could look forward to a more sustained recovery in 2022 with domestic demand playing a larger role.

For fixed income, 2014 saw a decline in the 10-year U.S. Treasury (UST) yield, as well as a stronger U.S. dollar, both of which supported hard currency Asian and emerging market fixed income. U.S. dollar (USD) Asian bonds and Asian high yield corporate debt were amongst the best-performing fixed income assets in 2014.

There are also some notable differences now compared to 2014. The 10-year UST yield already hit 3% before the Fed started to reduce asset purchases at the end of 2013. The risk to U.S. government bond yields in 2022 is to the upside.

Meanwhile, the USD index now is 3% above its 10-year average, while it was 11.5% below the average at the start of 2014. This implies the USD could weaken in the long run. This could prompt capital flow into Asia and emerging market assets, both in equities and fixed income.

One potential positive for Asian fixed income is that central banks in the region may not be in a rush to raise interest rates even if the Fed begins its policy normalization. The Bank of Korea is arguably an odd one out for raising policy rates before year-end, but other Asian central banks seem content with their low rate stance.

A quick look at Asian asset performance one year after the Fed’s last QE tapering
EXHIBIT 1: ASIAN ASSET PERFORMANCE IN 2014, AFTER THE FED'S QE TAPERING 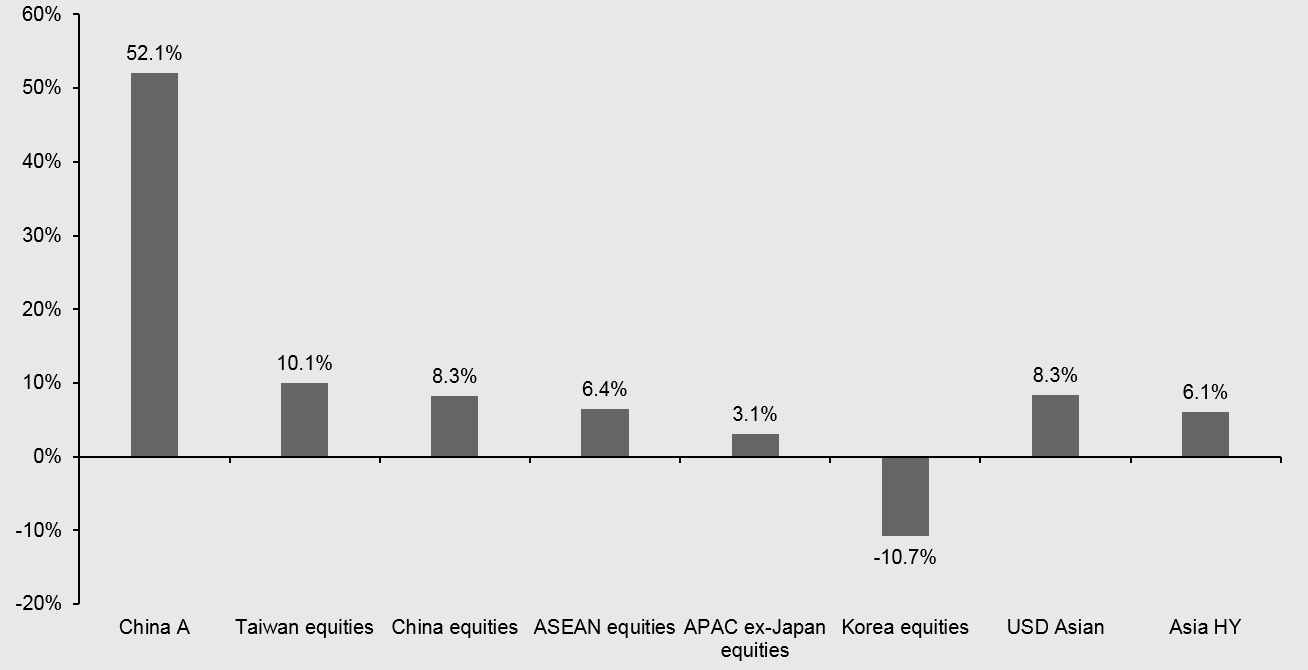 Investors need to recognize that U.S. monetary policy is only one of many factors driving asset returns. Moreover, there are considerable differences between 2021/22 and 2013/14 in terms of valuations, the level of interest rates and the USD, the economic backdrop and the geopolitical environment.

Overall, Asian equities and fixed income will remain attractive over the next 12 to 18 months even as the Fed normalizes its monetary policy. An ongoing improvement in vaccination rates should provide conditions for Asian governments to reopen their economies in a more sustainable way. This would allow for a more comprehensive recovery in corporate earnings, instead of relying only on exports. The United Nations Climate Change Conference in late October could also shine a spotlight on sectors that could benefit from greenhouse gas reduction policies.

A more complete and sustained recovery should also boost confidence in Asian corporate credits. The reduction of asset purchases by the Fed does not alter the fact that the global hunt for yield and income remains intense. While some specific sectors could still be under scrutiny, such as Chinese real estate developers, global investors could take a more benign view on Asian fixed income, especially as the USD starts to depreciate. 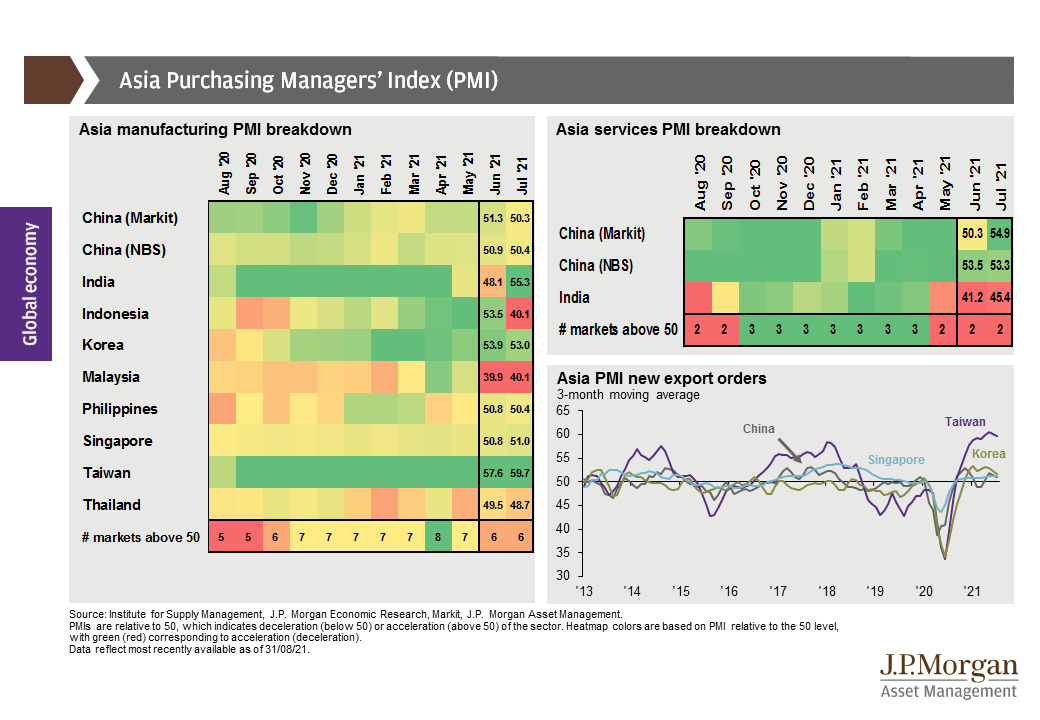 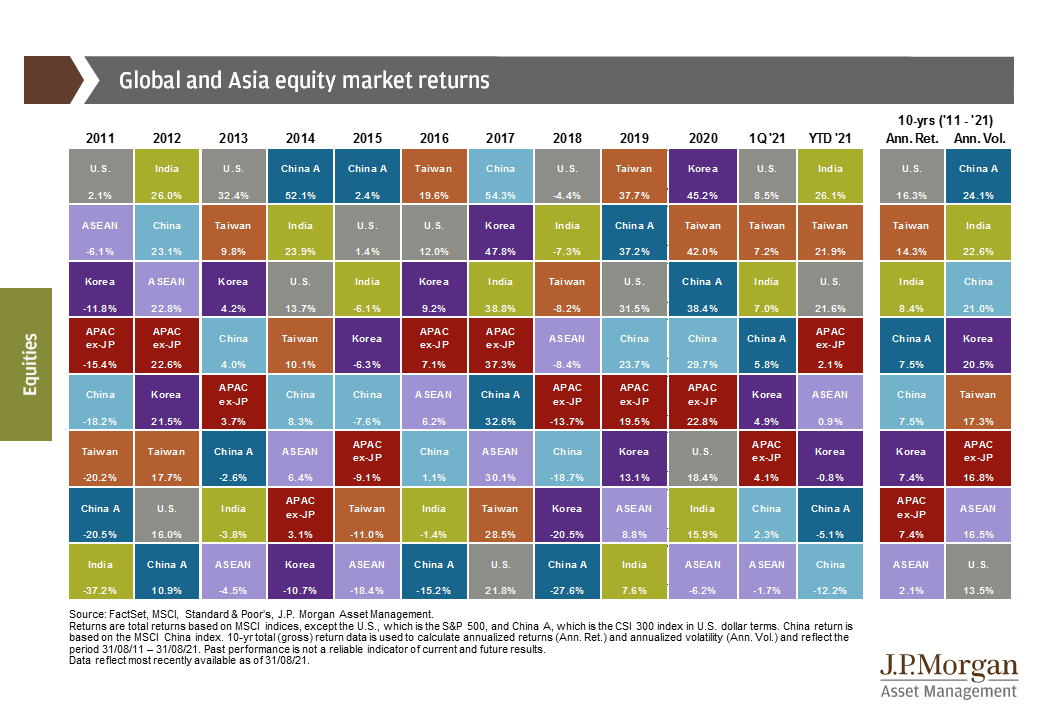 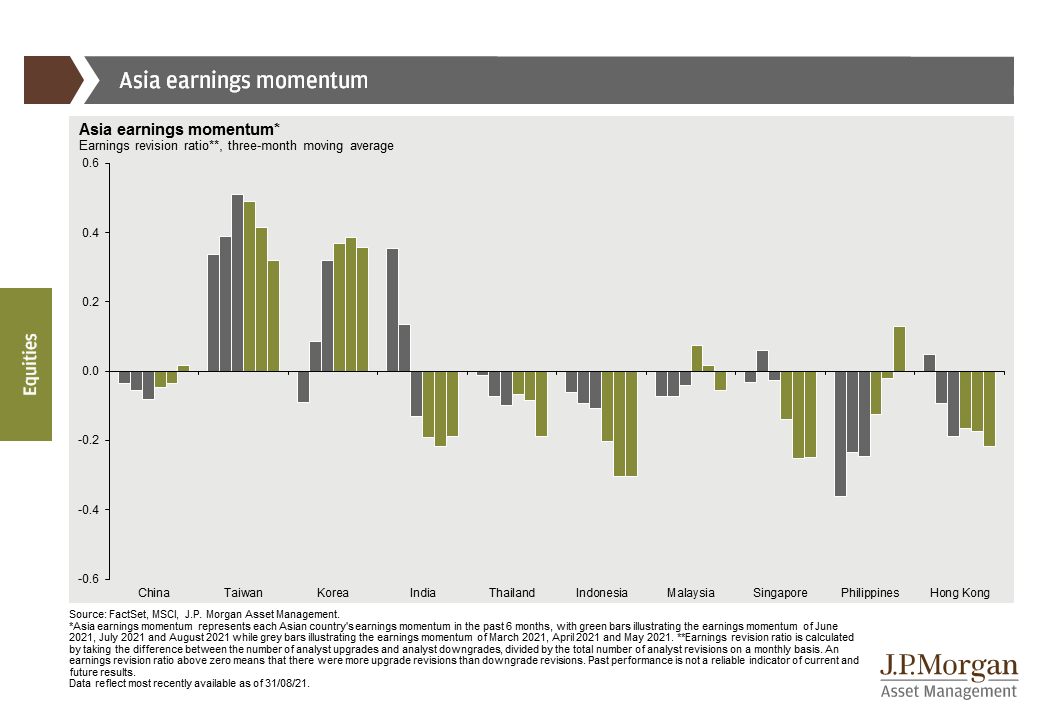 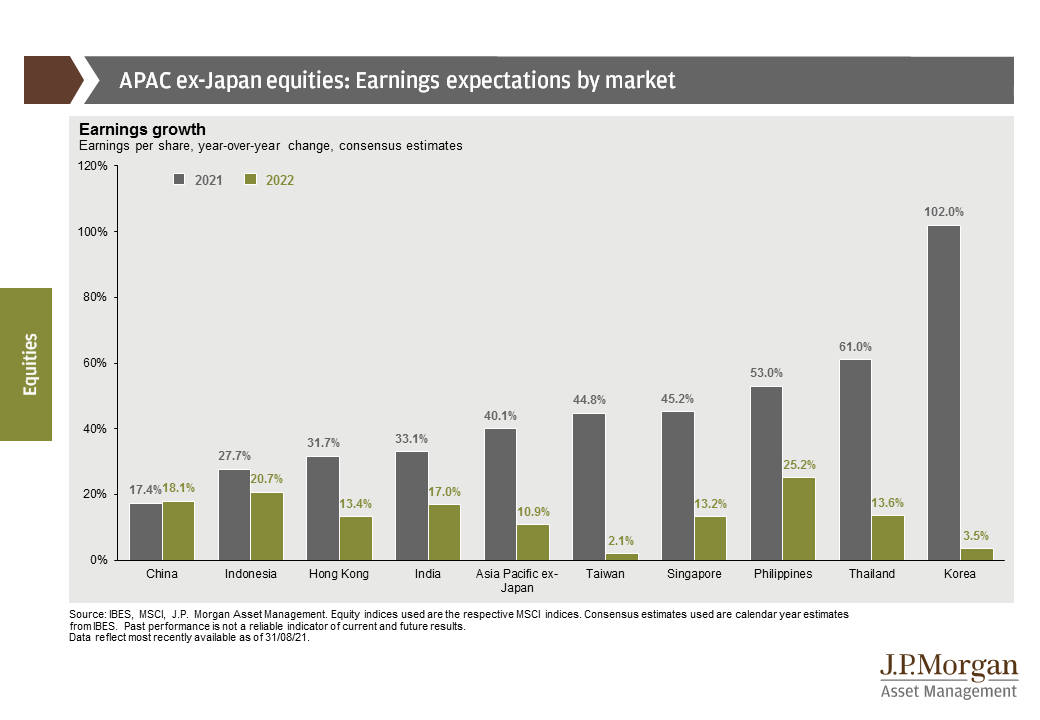 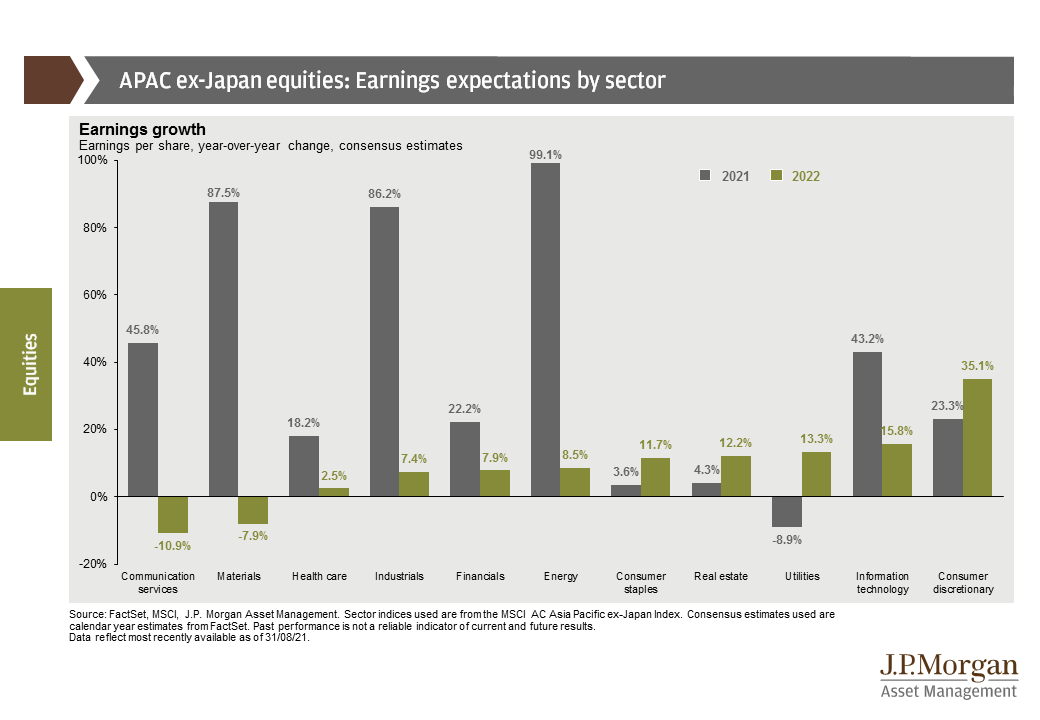 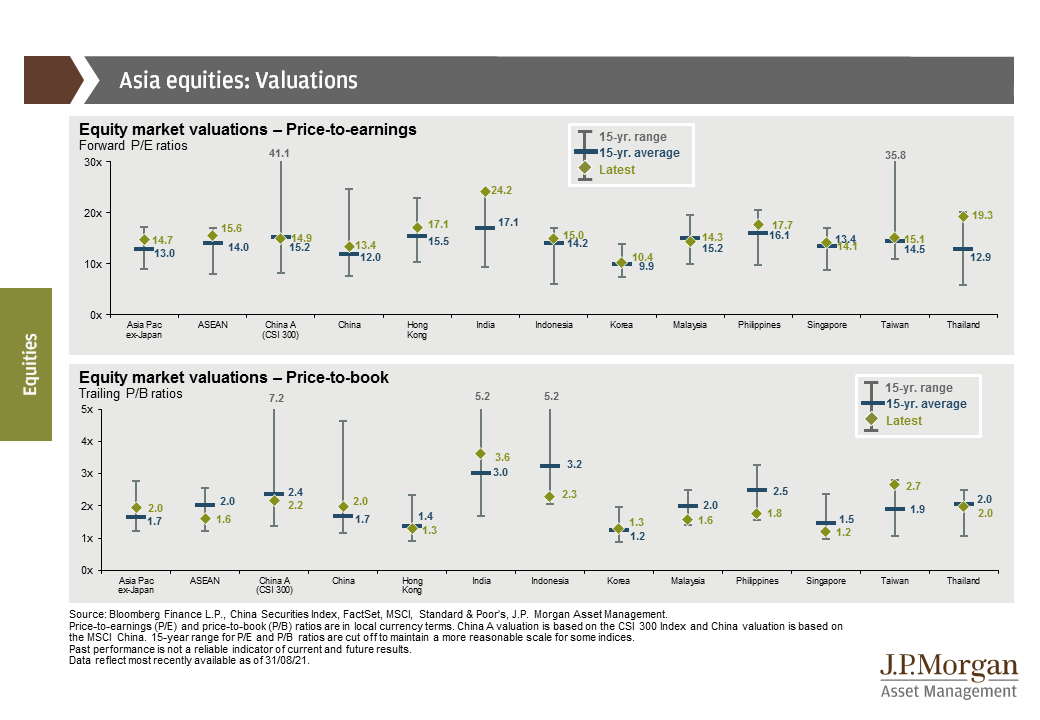 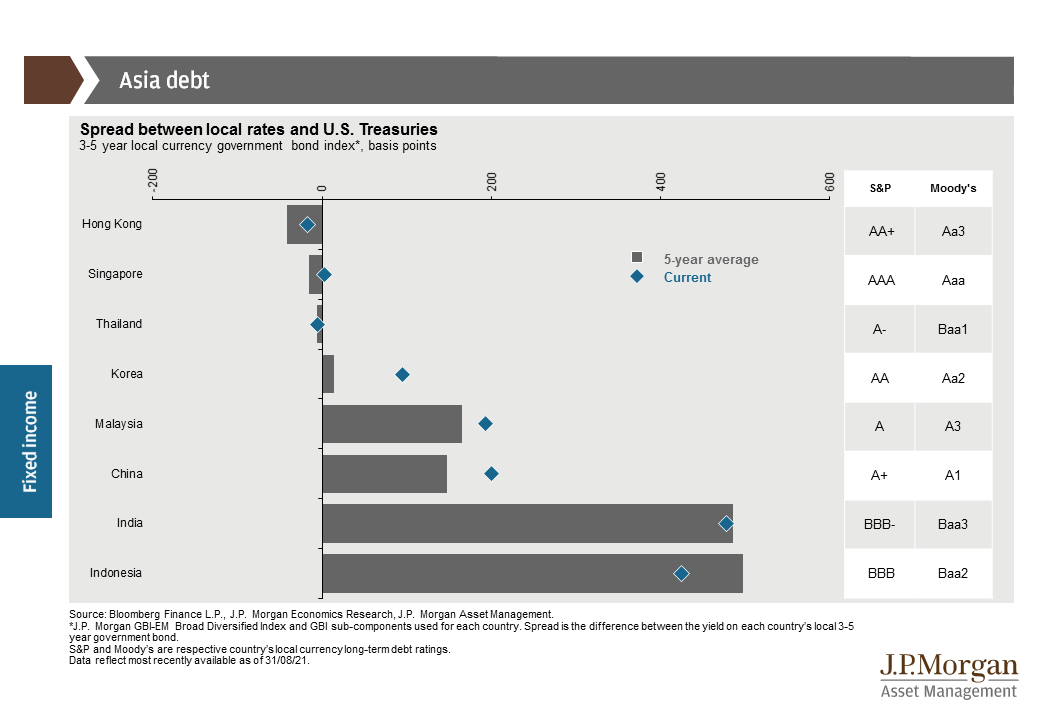 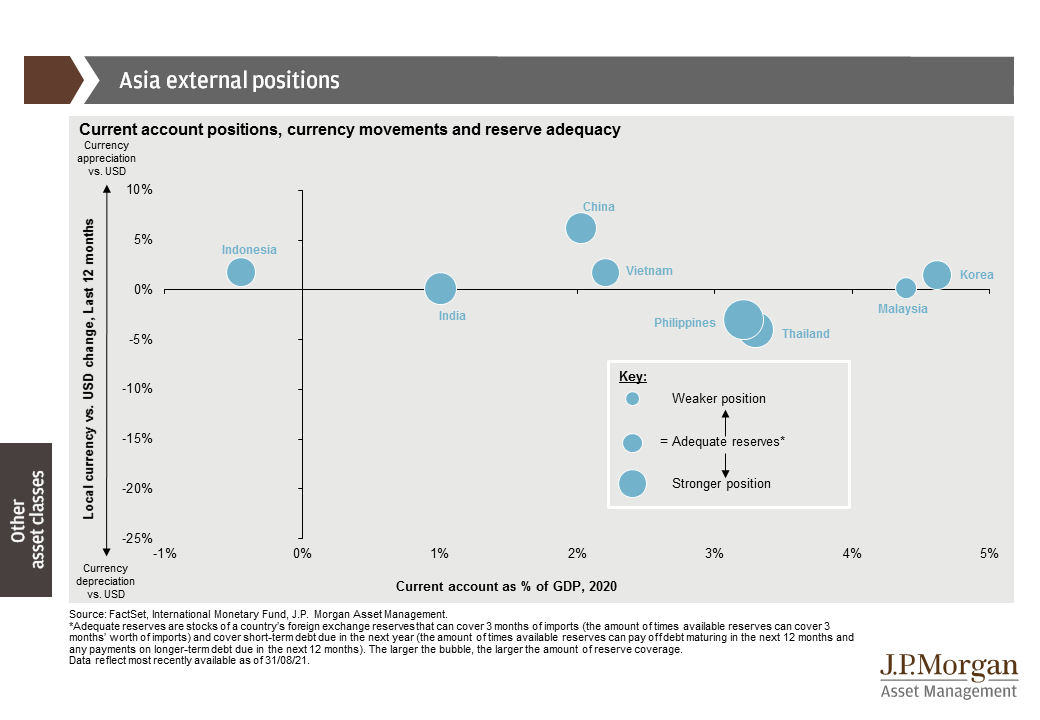 Continue reading: "How is Asia’s virus recovery so far?" >