Review of markets over the second quarter of 2022

It has been another difficult quarter for markets after what had already been a tough start to the year. This is now the worst first half of the year for developed market equities in over 50 years. To make matters worse, government bonds have also been hit so far this year, failing to provide the protection that investors usually look to them for.

Government bonds have been hit as markets moved to price in significant further increases in interest rates on top of what has already been announced. Markets now expect interest rates to rise to 3.4%, 3% and 1.6% in the US, UK and Europe, respectively, by next year. That increase in expectations for the path of interest rates has also contributed to a decline in equity valuations, along with concerns about the growth outlook. Recession fears have risen, due to the squeeze on consumers from higher prices and higher borrowing costs as the central banks seek to fight inflation. 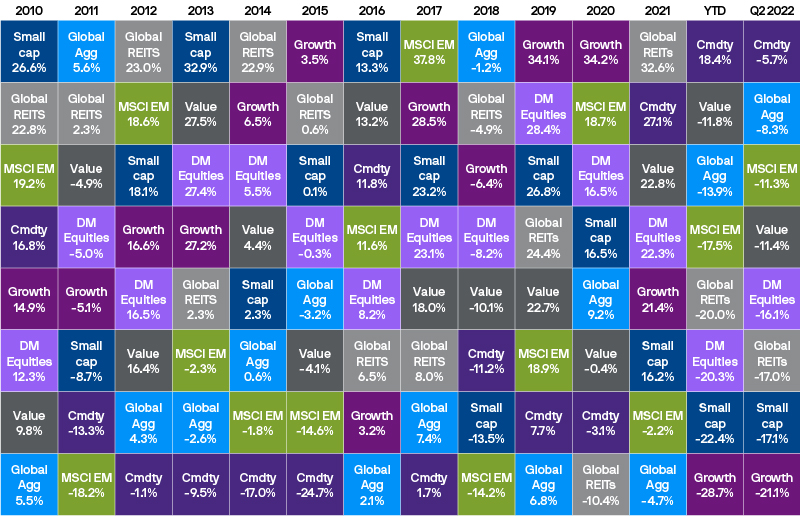 Despite recession fears building, consensus analyst forecasts still, perhaps surprisingly, expect positive growth in company profits for both this year and next. So, the key risks from here, with P/E ratios already looking cheap for most markets, are if company earnings disappoint relative to expectations, or if the still relatively expensive US growth stocks continue to see further declines in their valuations.

While unemployment remains low and wage growth strong, consumer sentiment has fallen sharply. The University of Michigan Consumer Sentiment Index has plunged this year. The Conference Board’s consumer confidence survey has held up better, given the higher importance it attaches to questions about the labour market, but has also weakened.

The other concern for the US economy has been the Federal Reserve’s (the Fed’s) indication that it is determined to get inflation under control, with the median Fed member now expecting to have to raise interest rates to 3.8% by next year to combat inflation. The Fed forecasts that unemployment will need to rise to just above 4% to get inflation down. However, the market is clearly worried that getting inflation under control could require unemployment to rise much higher, as has historically been the case.

There are already some signs that expectations for higher interest rates are starting to weigh on economic activity. With house prices almost 40% higher than at the start of 2020, and 30-year fixed mortgage rates having risen from below 3% to nearly 6%, housing has become much less affordable. That development is starting to be seen in the economic data, with the number of home sales declining.

On the plus side, while the number of housing transactions, and the associated economic activity, could continue to slow, it appears unlikely that we will see a repeat of the 2008 housing-led financial crisis. That’s because 95% of Americans today are on long-term fixed rate mortgages, compared with only 80% in 2007. So, there should be far fewer forced sellers. There has also been much less sub-prime lending, and the banks are now better capitalised, which means they are more able to withstand any loan losses that might be seen in a recession. On top of this, there has been much less home building than in the run up to 2008, so there are far fewer homes available for sale today than was the case in 2007. US equities declined 16% over the quarter. 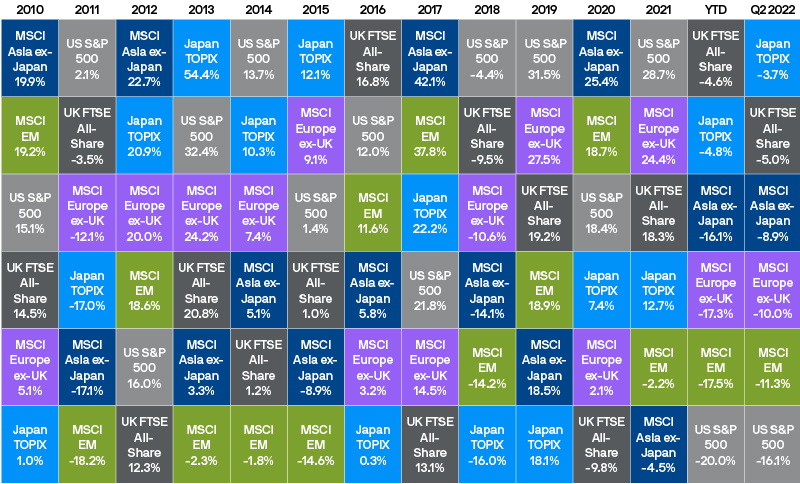 Source: FTSE, MSCI, Refinitiv Datastream, Standard & Poor’s, TOPIX, J.P. Morgan Asset Management. All indices are total return in local currency, except for MSCI Asia ex-Japan and MSCI EM, which are in US dollars. Past performance is not a reliable indicator of current and future results. Data as of 30 June 2022.

Unemployment remains low in the UK, but consumer confidence has hit a record low. Consumers are clearly feeling the squeeze from negative real wage growth. While the help from the chancellor to cope with higher prices will ease some of the pain, question marks remain as to whether it will be enough to prevent a recession.

Some households are also having to deal with rising mortgage costs at the same time as the squeeze from higher food and energy prices, as the Bank of England tries to bring inflation down by raising rates. About 17% of households are on tracker mortgages, while about a third of fixed rate mortgages are only fixed for two years, in sharp contrast to the US. So as interest rates rise and some fixed rate mortgage deals expire, mortgage costs are increasing. UK equities fell 5% over the quarter. 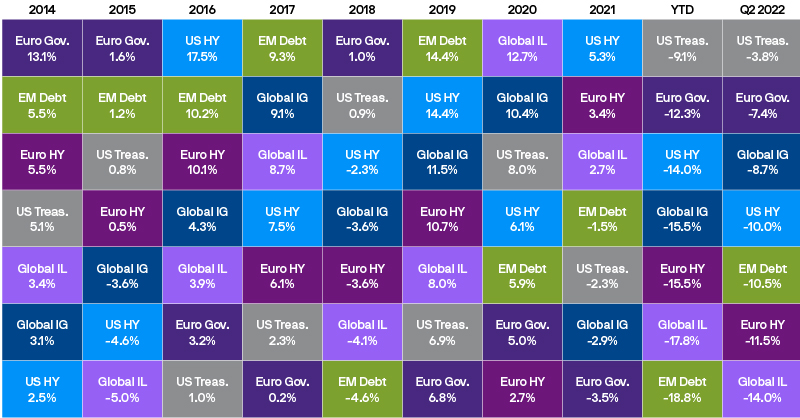 In Europe, consumer confidence has also fallen dramatically. The biggest risk to the European economy is the reduction in gas supplies coming from Russia, which has driven prices up significantly, and is raising fears of outright shortages and rationing if it continues. Gas shortages could have grave consequences for the European economy. Even without gas rationing, the business surveys have started to weaken.

Somewhat surprisingly, the market is pricing in significant rate rises from the European Central Bank (ECB). At the same time, the difference between the rate at which the Italian and German governments can borrow has widened materially, as it did in the run up to the eurozone sovereign debt crisis about a decade ago. In reaction, the ECB has said that it will come up with an antifragmentation tool to limit the rise in Italian borrowing costs, allow for an even transmission of its desired monetary policy across the eurozone, and hence help keep the eurozone together. The market, though, wants more detail on the tool and any conditions attached. European equities fell 10% over the quarter.

A recent study from the Chinese Center for Disease Control and Prevention showed that of more than 33,000 patients who have been sent to hospital after catching Omicron, only 22 developed severe illness, all of whom were over 60 and had pre-existing medical conditions. The study raises hopes that China may be able to move beyond the heavy restrictions that have severely affected economic activity this year. After a tough start to the year, Chinese equities rose over the quarter. 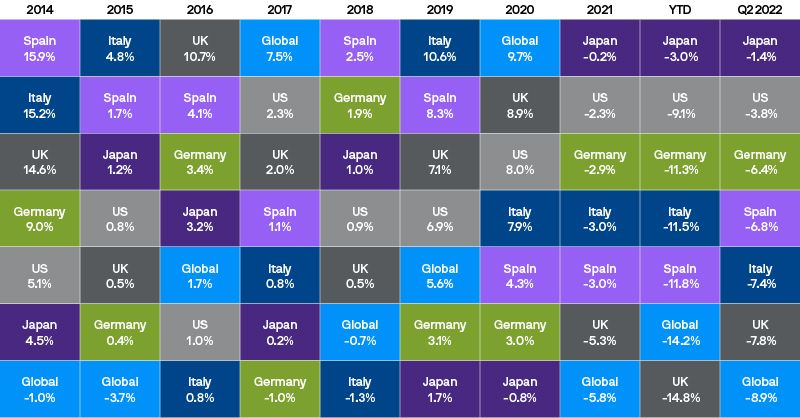 While risks remain, investors should remember that markets have already fallen a long way. So, even if we do end up in a recession, selling stocks now and buying them back cheaper at a later date would require an ability to time the bottom of the market in a way that very few professional investors, let alone retail investors, have historically been able to do. Therefore, we currently think that maintaining a neutral allocation to risk assets while bringing government bond positioning closer to the benchmark probably makes sense. For more on our latest views on the markets, see our Mid-Year Investment Outlook 2022: Assessing Recession Risk.

Source: Bloomberg Barclays, MSCI, Refinitiv Datastream, J.P. Morgan Asset Management. Past performance is not a reliable indicator of current and future results. Data as of 30 June 2022.