The forest and the trees

When constantly watching financial markets and following the 24-7 news flow, it can be easy to get caught up in the trees and miss the forest. Take for instance the observation that 10-year Treasury yields have moved 50bps higher since reaching the local lows in early September. But beyond the fact that long-term yields have retraced higher, what else has changed?

In an effort to objectively investigate this question, the following table shown below depicts the changes in financial markets, monetary policy, US and global economic data and the developments in the US/China trade situation since reaching the local yield lows. 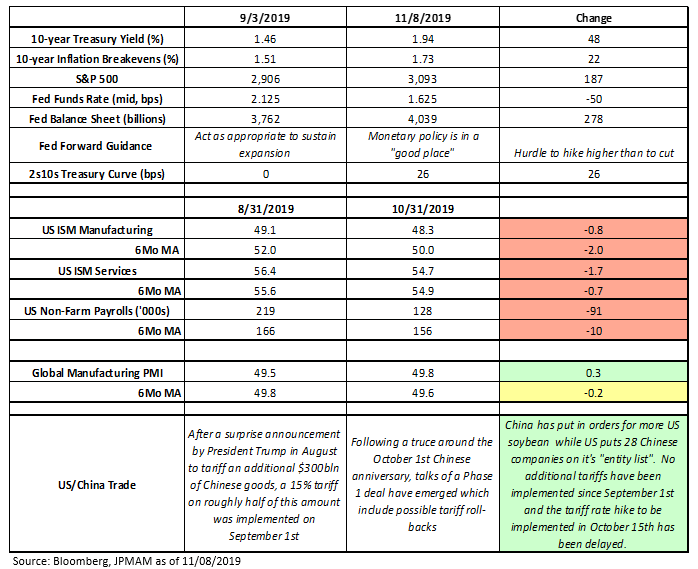 The changes in financial markets since September suggest investors are reducing their near-term recession probabilities following a prompt policy response from the Fed resulting in higher nominal yields, wider inflation breakevens, buoyant risk assets and a steeper US Treasury curve. This seems appropriate given that the Fed has eased policy and started re-expanding the balance sheet, global manufacturing activity has stabilized and headlines regarding US/China trade policy have improved.

Despite the re-pricing of recession risk, a more significant re-evaluation of the macro outlook could still be considered premature given that the positive trade headlines have not resulted in a concrete agreement between the US and China and the trend for US economic data remains soft. Furthermore, finding a catalyst that would result in a big resurgence in confidence and capex spending, even if there was a truce with China, is currently hard to identify as companies may still be hesitant to invest ahead of the US Presidential election. One possibility would be a surge in fiscal stimulus. Another possibility would be a doubling down on global central bank easing to more credibly combat low inflation resulting into a re-acceleration in global growth.

Turning to the Fed, the balance of risks for US monetary policy remains that the FOMC is more likely to ease again than to tighten. As we interpret the Fed’s reaction function, the hurdle to hike is much higher (and would take much more time to develop as it would require a re-acceleration in the data and more importantly higher inflation) than that to ease again if the service sector in the US were to weaken.

Undoubtedly, we have experienced some large swings in US Treasury yields – some of the largest since the election in 2016. However, it appears too early to clearly confirm a regime shift (like the one in late 2016) is occurring. The stabilization in global manufacturing activity and US/China trade are positive developments that should reduce near-term recession risk. What has not changed is the fact that the medium term trajectory for the US economy is still muted and the Fed is more likely to cut rates further than to raise them. These factors should ultimately keep a lid on how far Treasury yields can rise.