Central bank actions have created no shortage of headlines in 2022. Faced with inflation running at multi-decade highs, policymakers are caught between the proverbial rock and a hard place. Tighten policy aggressively and they risk triggering a deep recession, but do too little and they risk watching inflation expectations de-anchor as a result. The market’s angst about the prospect of tighter policy ahead has been clear for all to see.

Against this backdrop, it’s fair to say policymakers have their hands pretty full. Yet this is precisely why a headline of a different nature caught my attention recently. Despite being faced with one of the most complex macroeconomic outlooks in nearly 50 years, the European Central Bank (ECB) recently declared its intention to turn the fight against climate change into “real action”. This action includes tilting corporate bond holdings toward issuers with better climate scores, new climate-related disclosures, and enhanced risk management practices. In my opinion, it is absolutely right that environmental considerations do not take a backseat, even when accounting for today’s inflation headache.

The responsibility for facilitating an orderly transition to net zero falls primarily under a government’s remit, rather than to its central bank, yet there are nonetheless several justifications for assigning climate factors greater priority in monetary policy. It may be that a central bank has a specific mandate to support a government’s economic policies, including policies related to the energy transition. Alternatively a financial stability perspective may warrant action, with scientific research having laid out extensively the potential damage inaction might cause. Take the White House Office of Management and Budget’s recent estimates that current warming could translate into an annual revenue loss to the federal budget of about $2 trillion as an example. There is also direct feedthrough from global warming to inflation, such as the way in which droughts can force food prices higher and threaten food security.

The progress made in integrating climate factors into central bank mandates varies by region. The Bank of England is one of the furthest ahead, with the UK government having changed the Bank’s remit in March 2021 to explicitly include supporting the economy’s transition to net zero. The ECB recently announced details on decarbonising its bond holdings, and its president Christine Lagarde has been a vocal advocate for why embedding environmental risks is mission critical long before this. The Federal Reserve’s (Fed’s) approach has so far been more constrained, with a focus on managing the risks to the financial system posed by climate change, for example via stress testing. In Asia, both the People’s Bank of China and the Bank of Japan have launched dedicated lending facilities to offer discounted funding for clean energy.

Policymakers have a range of options to drive change, but in my view, corporate bond purchase schemes will be their most effective tool. In a period where tighter financial conditions are the order of the day, clearly balance sheet reduction is the priority. Yet inevitably at some stage during a future downturn, the comfort blanket of asset purchases will be required again in order to ease market woes. Historically, this support has been extremely effective – US investment grade spreads fell by 100 basis points in just over a week after the Fed declared its intention to start corporate bond purchases in March 2020. In Europe, the ECB’s forceful approach to quantitative easing (QE) has pinned euro-denominated credit spreads below levels seen in the US or the UK for much of the past decade.

If eligibility for QE purchases is more explicitly contingent on the environmental credentials of businesses – as reinvestments now are in the eurozone – then the benefits of central bank support will be felt less evenly. There is already a clearly observed green premium, or “greenium”, in fixed income markets, where huge demand for green, social and sustainable bonds has resulted in these issues trading at lower yields than comparable “traditional” bond counterparts. As markets start to pay an increasing amount of attention to the changes afoot in central bank policy, I expect to see environmental factors driving larger differentials in spreads across the credit markets.

The ECB clearly feels that this issue is too important to ignore. Investors would be wise to take the same approach. At crunch time in previous crises, the role of central banks as a buyer of last resort has been crucial in stabilising credit markets. When the QE comfort blanket is next called upon, we may well find that it’s a little smaller than before. 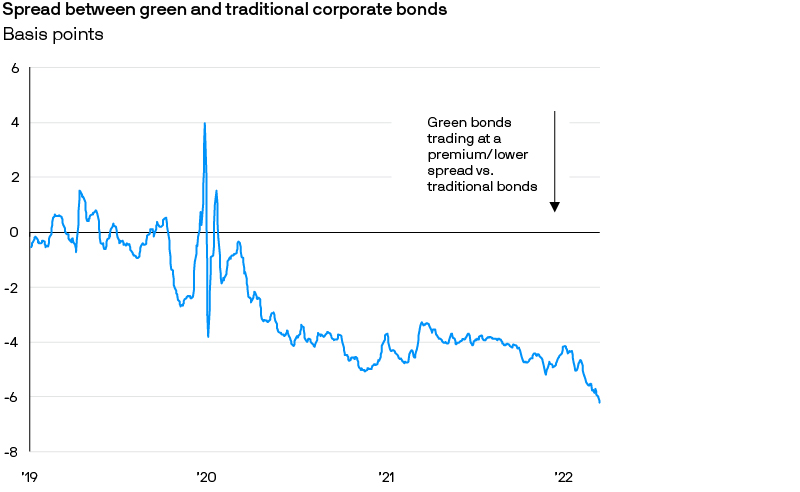 Source: Barclays Research, J.P. Morgan Asset Management. Data shown is for a Barclays Research custom universe of green and non-green investment-grade credits, matched by issuer, currency, seniority and maturity. The universe consists of 164 pairs of bonds across a range of USD, EUR and GBP denominated issues. Past performance is not a reliable indicator of current and future results. Data as of 30 June 2022.

The Market Insights programme provides comprehensive data and commentary on global markets without reference to products. Designed as a tool to help clients understand the markets and support investment decision-making, the programme explores the implications of current economic data and changing market conditions.] For the purposes of MiFID II, the JPM Market Insights and Portfolio Insights programmes are marketing communications and are not in scope for any MiFID II / MiFIR requirements specifically related to investment research. Furthermore, the J.P. Morgan Asset Management Market Insights and Portfolio Insights programmes, as non-independent research, have not been prepared in accordance with legal requirements designed to promote the independence of investment research, nor are they subject to any prohibition on dealing ahead of the dissemination of investment research. This document is a general communication being provided for informational purposes only. It is educational in nature and not designed to be taken as advice or a recommendation for any specific investment product, strategy, plan feature or other purpose in any jurisdiction, nor is it a commitment from J.P. Morgan Asset Management or any of its subsidiaries to participate in any of the transactions mentioned herein. Any examples used are generic, hypothetical and for illustration purposes only. This material does not contain sufficient information to support an investment decision and it should not be relied upon by you in evaluating the merits of investing in any securities or products. In addition, users should make an independent assessment of the legal, regulatory, tax, credit, and accounting implications and determine, together with their own professional advisers, if any investment mentioned herein is believed to be suitable to their personal goals. Investors should ensure that they obtain all available relevant information before making any investment. Any forecasts, figures, opinions or investment techniques and strategies set out are for information purposes only, based on certain assumptions and current market conditions and are subject to change without prior notice. All information presented herein is considered to be accurate at the time of production, but no warranty of accuracy is given and no liability in respect of any error or omission is accepted. It should be noted that investment involves risks, the value of investments and the income from them may fluctuate in accordance with market conditions and taxation agreements and investors may not get back the full amount invested. Both past performance and yields are not a reliable indicator of current and future results. J.P. Morgan Asset Management is the brand name for the asset management business of JPMorgan Chase & Co. and its affiliates worldwide. To the extent permitted by applicable law, we may record telephone calls and monitor electronic communications to comply with our legal and regulatory obligations and internal policies. Personal data will be collected, stored and processed by J.P. Morgan Asset Management in accordance with our EMEA Privacy Policy www.jpmorgan.com/emea-privacy-policy. This communication is issued in Europe (excluding UK) by JPMorgan Asset Management (Europe) S.à r.l., 6 route de Trèves, L-2633 Senningerberg, Grand Duchy of Luxembourg, R.C.S. Luxembourg B27900, corporate capital EUR 10.000.000. This communication is issued in the UK by JPMorgan Asset Management (UK) Limited, which is authorised and regulated by the Financial Conduct Authority. Registered in England No. 01161446. Registered address: 25 Bank Street, Canary Wharf, London E14 5JP.