Key to a weaker USD: Better growth outside the U.S.

2023 kicked off with a resurgence of investor optimism. Year-to-date, global equities rose over 6% and the USD DXY Index fell 1.7%. Crucially this reflects optimism around economic news outside the U.S. The fast reopening of the Chinese economy, reduced recession risk in Europe and, finally, heightened expectations that the Bank of Japan (BoJ) will remove its yield curve control (YCC) in coming months have acted as catalysts for weakening of the USD.  At the same time, the Federal Reserve (Fed) is likely to slow its pace of hikes, which reduces the relative rate support for the U.S. dollar. We expect this trend to continue in 2023.

In this report, we discuss these catalysts and the implications of a weaker USD for our multi-asset portfolios. In short, we are positive on emerging market assets relative to developed markets (both bonds and equity).

For the better part of 2022, we took a positive view on the U.S. dollar. But at our December Strategy Summit, we downgraded our view to neutral, anticipating a nearing pause in the Fed’s hiking cycle. Recent events have strengthened our conviction in a weaker USD outlook.

The abrupt removal of zero-Covid policies in China took markets by surprise, both in terms of the speed of reopening and the breadth of new policies to support the cyclical recovery. Investors are quickly looking through the rapid spread of COVID-19 and focusing on the sharp - and faster-than-expected - rebound in economic activity later in Q1. 2023 China growth forecasts have ramped up significantly - we expect a 5.8% increase in GDP for the year and see risks that growth could surprise to the upside. In 2022, in stark contrast, China’s economy grew less than 3%.

Since China accounts for 17% of global GDP, its economic rebound will have important implications both for global growth and the relative growth gap between the U.S. and the rest of the world. We see this shift in the relative growth outlooks as a key factor pushing the USD weaker, particularly vs. EM Asian currencies.

At the same time, the start of the year brought signs that the European growth picture is not as bad as feared. The natural gas crunch appears to be less damaging than expected. That reflects increased imports of LNG from outside of Europe as well as manufacturers’ ability to implement efficiency gains without a major sacrifice in economic activity. Moreover, as many national governments introduced policies to reduce the impact of market price pressures on household utility bills, domestic demand has held up better than expected.

Even as recession risk fades, core inflation of around 5% year-over-year  persists in the euro area, with many product group prices still accelerating (Exhibit 1). As a result, we expect the European Central Bank (ECB) will remain firmly in tightening mode, with a 50 basis point (bps) hike at the next meeting. The Fed, on the other hand, is likely to slow its pace of hikes to 25bps per meeting. For FX markets, it’s a one-two punch: Improving growth outside the U.S. is pushing the USD weaker, and so too are rate differentials.

The breadth of accelerating inflation in the euro area outpaces the U.S.

Exhibit 1: Weighted share of CPI products with quarter-over-quarter inflation above 0.2% 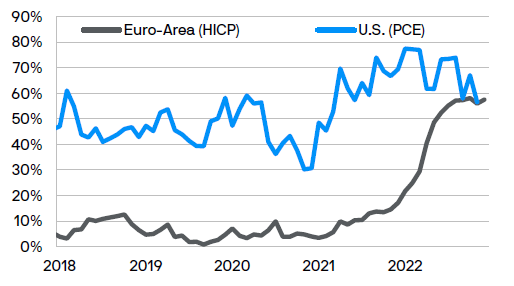 Japanese monetary policy will continue to impact broader DM rate differentials and the U.S. dollar outlook. In the wake of the BoJ’s surprising December decision to adjust its yield curve control targets, investors have speculated about further changes and their implications for the yen and Japanese foreign bond investments. Our view: Policy will normalize later in the year, which will  support the outperformance of the yen.

At its January meeting, the BoJ was resolutely dovish in the face of ongoing market pressures and operations. Its goal: to promote YCC targets without direct JGB purchases.

However, the central bank again revised its core inflation forecasts for fiscal year 2023 higher, from 1.6% to 1.8%, the fourth consecutive BoJ meeting at which increases were made to either 2023 or 2024 inflation forecasts. Outgoing Governor Haruhiko Kuroda also highlighted prospects for demand-driven price pressures stemming from a tightening labor market and a narrowing negative output gap.

This aligns with our own view that Japanese inflation, while tame compared to other regions, is no longer consistent with the deflationary backdrop that first necessitated loose monetary policy. We think the BoJ’s recent dovish tone aims to ease market functioning so that the incoming Governor can normalize policy in a controlled manner in 2023 and 2024. We expect policy shifts after the BoJ leadership change and the annual wage negotiations (known as Shunto) that will take place in the Spring.

All else equal, we think the next stage of Japanese policy normalization would be bearish for global duration. Markets with outsized Japanese participation, such as Australia and France, would likely underperform their recent beta to global duration.

In the context of FX markets, expectations of policy normalization in the coming months, reduced net portfolio investment outflows, and still-elevated recession risk has translated into JPY outperformance amid the broader USD sell-off. Japan’s elevated commodity import bill acts as a headwind to the currency, especially given renewed Chinese commodity demand. Still, the recovery of inbound tourism should partially offset the drag on Japan’s balance of payments.

Our conviction that U.S. inflation has peaked and our view that the BoJ will normalize policy later this year implies that the outperformance of Japanese yen can persist.

Our multi-asset portfolios remain modestly underweight equities, with the underweight focused on U.S. large caps, reflecting an earnings downgrade cycle set to continue. That said, we are mindful of the improving balance of risks to European and Chinese growth and thus take a more positive view of these equity markets on a relative basis. Local currency emerging market debt is another area of focus. Fundamentals are improving here, as USD strength begins to fade, and the  real yield on offer in local EM debt appears increasingly attractive.

At current yield levels, we see more two-way risk on core duration, but we prefer to be buyers of U.S. Treasuries as the U.S. hiking cycle nears its end. Also, as data points to slowing U.S. economic growth, stock-bond correlations are becoming more negative. Looking ahead, we expect bonds to offer greater protection in a multi-asset portfolio. We maintain a preference for high-quality DM credit over equities due to attractive all-in yields, particularly in the short end of the curve. At the margin, our portfolios are becoming less cautiously positioned amid reduced risk of recession. 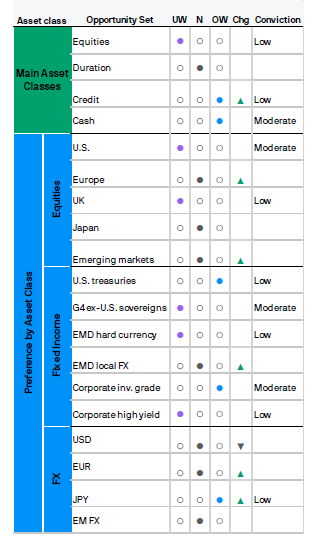 The tick chart and views expressed in this note reflect the information and data available up to December 2022.