Review of markets over October 2022

Geopolitical risks remained at the forefront of investors’ minds, with tensions between Russia and Ukraine escalating further. However, there were some reasons for optimism. Global supply chain constraints continued to ease, and European governments took further steps to dampen the impact of the energy crisis and mitigate the risks of a harsh recession. 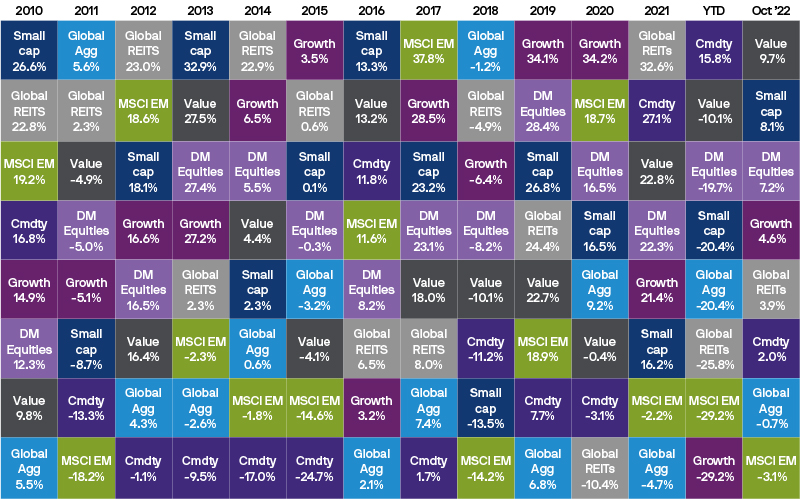 The combination of high inflation and solid labour markets continued to support hawkish action from central banks. The European Central Bank (ECB) announced another jumbo rate hike of 75 basis points (bps) on 27 October and the Federal Reserve (Fed) is expected to follow suit at its meeting in early November. Government bond yields made new cycle peaks with 10-year yields reaching 4.2% and 2.4% in the US and Germany respectively before falling back slightly by the end of the month.

A challenging economic outlook and geopolitical risks both continued to push the US dollar higher. Dollar strength was particularly notable against the Japanese yen and the Chinese renminbi, two currencies whose central banks continue to adopt a much more accommodative stance.

Flash Purchasing Managers' Indices (PMIs) for October confirmed an economic slowdown in many developed markets. While recession risks are clearly rising, we continue to see factors that may help to mitigate the depth of any downturn. In the US, labour markets remain strong and the housing market appears to pose far fewer systemic risks compared to the problems that led to the global financial crisis. In Europe, government support measures should also help to moderate the threats to disposable income posed by soaring energy bills.

The US economy showed some signs of softening in October. A slowdown in both housing starts and home sales highlight how higher mortgage rates are weighing on the sector. Flash PMI data disappointed, with the manufacturing survey falling to 49.9, its lowest level since early in the pandemic. Meanwhile, the services survey declined to 46.6, with forward looking indicators notably weak.

Headline and core consumer price indexes rose 8.2% and 6.6% year-over-year (y/y) respectively, mainly due to strong services prices that are offsetting falls in goods and energy prices.

The labour market remains the bright spot as highlighted by the September jobs report. The unemployment rate fell to a new record low of 3.5% with a stable participation rate of 62.3%, while average hourly earnings rose 0.3% month-over-month (m/m).

In aggregate, data released in October kept up the pressure on the Fed. A rate hike of 75bps is expected in November followed by a further 50bps in December. 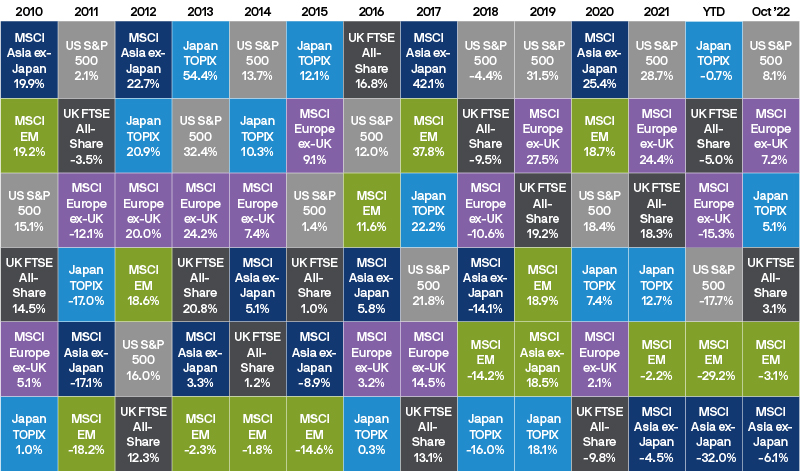 Source: FTSE, MSCI, Refinitiv Datastream, Standard & Poor’s, TOPIX, J.P. Morgan Asset Management. All indices are total return in local currency, except for MSCI Asia ex-Japan and MSCI EM, which are in US dollars. Past performance is not a reliable indicator of current and future results. Data as of 31 October 2022.

Rishi Sunak was appointed as the new prime minister, while new chancellor Jeremy Hunt reversed many of the previous chancellor’s tax cuts and vowed to deliver a much more restrained budget in mid-November. This led UK government bonds to rally by 3% over the month. Sterling also rallied by a similar amount against the dollar. Market expectations for the Bank of England’s rate hikes moderated, with interest rates now expected to peak at about 4.75% next year.

The composite flash PMI fell to 47.2, while headline inflation climbed to 10.1% y/y in September.

Europe announced new plans to tackle the energy crisis that included a first version of a price cap and a common purchases system. These measures, together with new fiscal stimulus support of €40bn, should help both households and businesses. With storage tanks full and autumn proving unseasonably warm so far, gas prices continued to move lower. While winter gas prices are down by about 60% since the peak in August, they remain higher than the 2021 average. The implications of the energy situation in Europe are discussed in our recent On The Minds of Investors publication “Exploring the economics of Europe’s energy crisis”.

Germany launched a jumbo fiscal package of €200bn to support households and firms. This plan was seen with some scepticism by other European countries that argued that a co-ordinated rescue plan across the bloc would have reduced the risk of economic and social fragmentation.

The eurozone PMI surveys reached levels that are consistent with recession. October’s flash composite PMI registered a fall to 47.1, with the manufacturing index at 44.2 and services at 48.2. Inflation in the single currency bloc rose to 10.7% y/y, and core inflation at 5% y/y.

Despite the still difficult macro outlook, the ECB delivered a 75 basis point rate hike in October. 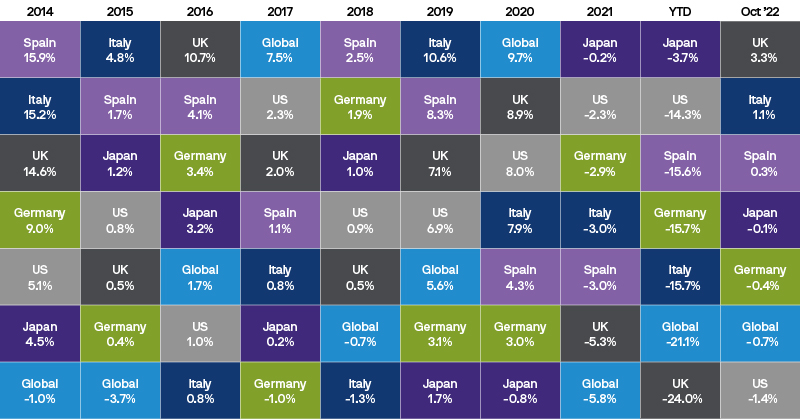 Japan’s October flash composite PMI rose to 51.7, with strength in the services sector reflecting ongoing reopening dynamics. Domestic demand is picking up after the removal of Covid-19 restrictions and foreign tourist flows are returning. With inflation still far lower than the rest of developed markets, the Bank of Japan continues to pursue its unchanged accommodative policy in total contrast to other central banks around the world.

At the 20th Party Congress President Xi was reappointed as expected. Other changes in party leadership created some volatility in Chinese stock markets, with internet companies hit especially hard. China’s Caixin September services PMI showed a sizable fall of 5.7 points to 49.3 due to the latest Omicron wave. Real GDP growth rebounded to 3.9% y/y in the third quarter, beating market expectations. The manufacturing sectors have led the recovery, although the service sectors are still suffering from sporadic lockdowns across the country. Headline inflation remains subdued at 2.8% y/y, creating room for the People’s Bank of China to pursue more accommodative monetary policy with new rate cuts expected in 2023. 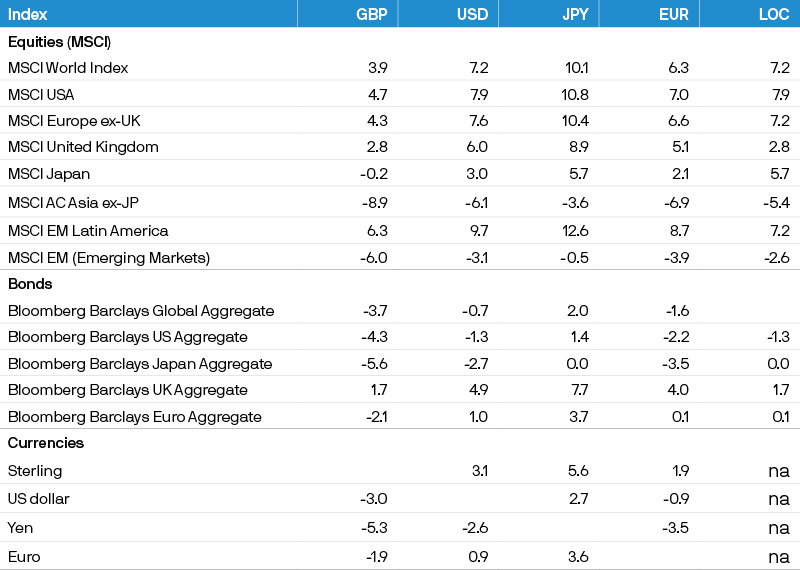 Source: Bloomberg Barclays, MSCI, Refinitiv Datastream, J.P. Morgan Asset Management. Past performance is not a reliable indicator of current and future results. Data as of 31 October 2022.

The energy crisis remains the key risk to European growth, yet October did at least provide encouraging signs that a harsh recession may yet be avoided. In the short term, stagflationary pressures are creating a difficult environment, but high dividend paying stocks may offer an area of resilience as discussed in the recent On The Minds of Investors publication “The advantage of high dividend stocks in a stagflationary environment ”.

While the economic outlook is likely to deteriorate further, declines in equity markets in the year to the end of September suggested that a significant amount of bad news was already priced in. This helps explain the rally in equities over October despite the still challenging economic backdrop. The sharp sell-off in bonds this year is also improving the options available to investors who are looking to build diversified multi-asset portfolios.