The Bank of England “strikes” again

At its 14 December monetary policy meeting, the BoE voted to raise the Bank Rate by 50bps to 3.50%, bringing borrowing costs to their highest level since 2008 (Exhibit 1). Over the past 12-months, the UK central bank has pushed the base rate up by 340bps – the fastest pace on record – as it grapples with a combination of elevated inflation and a tight employment market, which has magnified the risk of an extended period of more persistent inflation.

Notably, the decision wasn’t unanimous - it was dovishly split 2-6-1, with both Silvana Tenreyro and Swati Dhingra voting to keep the Bank Rate unchanged – suggesting rates were already high enough to curtail demand and inflation. In contrast, Catherine Mann voted to increase the Bank Rate by 75bps to 3.75%, stating that larger hikes were needed to avoid inflation expectations becoming embedded. In subsequent written comments, BoE Governor Bailey hawkishly observed evidence of “greater persistence” of inflation that could justify “a further forceful monetary policy response”. 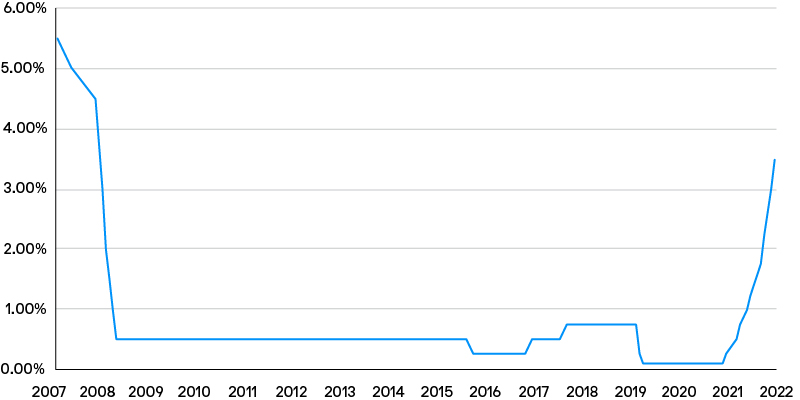 The inflation versus recession dilemma

UK monthly GDP grew by a slightly higher-than-expected 0.5% month on month (m/m) in October, following a 0.6% m/m fall in September. However, the central bank estimates that GDP will decline by 0.1% quarter on quarter (q/q) in the fourth quarter of 2022, which is better than the -0.3% q/q projected in the November Monetary Policy Report (MPR), although this would still push the UK economy into a recession, which the BoE believes could continue for a “prolonged period”.

Concurrently, although consumer price index (CPI) inflation eased a touch more than forecasts to 10.7% year on year (y/y) in November from a multi-decade high of 11.1% y/y in October, inflation remains well above the BoE’s 2% target level - triggering the sixth consecutive letter from the Governor to the Chancellor of the Exchequer. Both parties acknowledged that external global factors and, increasingly, domestic factors are adding significantly to inflationary pressures.

The BoE still believes that inflation will peak in the fourth quarter of 2022, before falling sharply from mid 2023 “to some way below the 2% target in years two and three of the projection”. Nevertheless, while the government’s Energy Price Guarantee scheme has helped limit price rises, inflation is still expected to remain elevated due to domestic factors for several months.

This sharp focus on combating inflation was, fittingly, delivered in the same week the UK has been paralysed by swathes of strike action. In December the UK will witness strikes by rail, ambulance, NHS and other workers, highlighting the severe challenges that UK policy makers are currently grappling with.

Interestingly, the BOE removed the guidance it issued in November, suggesting the path for interest rates implied by the markets (Exhibit 2) was too aggressive; instead suggesting that “further increases in the Bank Rate may be required” to bring back inflation to target in the medium term. 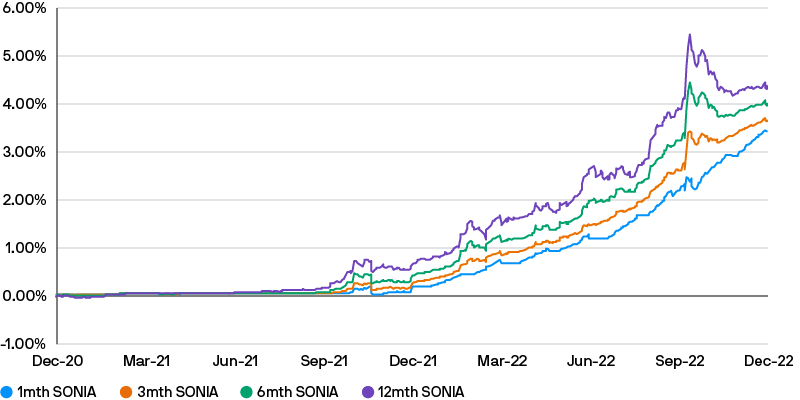 The outlook for the UK economy remains uncertain as elevated inflation concerns clash with increasing signs of recession – suggesting interest rates will remain volatile for the foreseeable future. Nevertheless, sterling cash investors will welcome this further increase in base rates, which should boost yields on short-term investments.

The improved overnight rates and steep yield curves will allow liquidity strategies to boost returns – albeit with a slight delay due to the need to reinvest term maturities. Our liquidity strategies have been very defensively positioned ahead of the December Monetary Policy Committee meeting, with low weighted average maturity (WAM) and large cash balances enabling strategies to quickly benefit from the step-up in rates.

Similarly, J.P. Morgan’s Sterling Managed Reserves Strategy has been positioned at its historically shortest duration, allowing it to capture additional yield from the BoE’s hiking cycle and avoid capital losses as rates curves reprice higher. Given its slightly longer duration compared to the liquidity strategy, cash investors seeking to capture the current levels of high yields over a longer time horizon may consider stepping out into the Sterling Managed Reserves Strategy, which will run at a relatively longer duration going into the anticipated recession in the next few quarters.

Source for all data is Bank of England, as at 15 December 2022, unless otherwise stated.