Review of markets over August 2022

Central banks’ commitment to bring inflation under control, despite the inherent risks to the growth outlook, shook both equity and bond markets in August. While the summer brought historical droughts and heatwaves to many parts of the world, the global economy nevertheless continued to cool down. Most of the economic data published last month, such as the global composite Purchasing Managers’ Index (PMI), which dropped to a 22-month low of 50.8 in July, continued to illustrate the slowing of the global economy. However, the economic data was generally a bit better than expected, as shown by economic surprise indices, while global inflation pressures started to ease on the back of lower commodity prices. 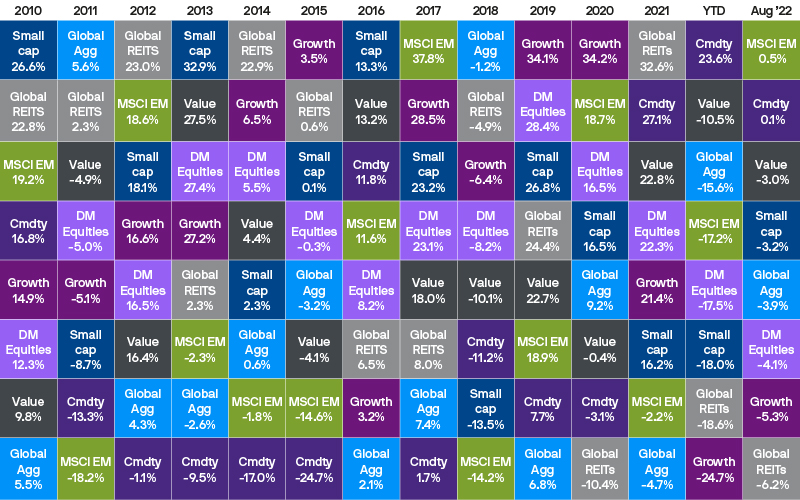 All in all, the level of uncertainty about the outlook for the global economy remains elevated. This uncertainty is especially elevated in Europe, where after six months of war in Ukraine there is no sign of a ceasefire, and where a recession seems increasingly likely this winter as the region’s energy crisis continues to intensify. While the resumption of Ukraine’s grain exports through the port of Odessa has eased global food price pressures somewhat, Russia has continued at the same time to limit its gas exports to Europe, which together with the announcement of an unscheduled maintenance shutdown of the Nord Stream 1 pipeline, pushed average gas prices over the month to new all-time highs.

Against this uncertain global economic backdrop, global equity markets came under downward pressure in August, having rebounded strongly in July. The MSCI World index was 4.1% lower. European equity markets dropped the most, with MSCI Europe ex UK down 4.7%, while in the US, the S&P 500 was down 4.1%. Japan continued to outperform most markets in August, with the Topix gaining 1.2%, which left it flat year-to-date in local currency terms, helped by the weakness in the yen. Emerging markets were up 0.5% last month as the relatively better economic momentum in many markets was balanced by the difficulties encountered by China, both in its real estate sector and also due to the major heatwave and drought. From a factor perspective, value outperformed growth again in August as bond yields rose.

Eurozone second-quarter GDP surprised on the upside, growing 0.7% quarter on quarter, but the data revealed important divergences among member states. Those countries benefiting from the post-Covid services rebound, such as Spain, Italy and, to a lesser extent, France, generally performed well while the German economy, which is the most dependent on Russian gas imports, came to a standstill. The relative resilience of the eurozone economy in the first half of the year is also due to the fiscal measures deployed in the European Union (EU) since the start of the war in Ukraine. According to the European Central Bank, these measures should add 0.4% to the EU’s GDP this year and reduce inflation by as much. 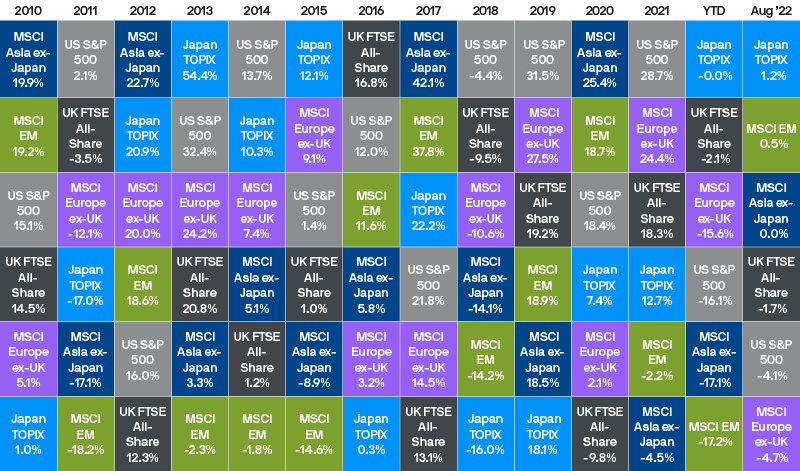 Source: FTSE, MSCI, Refinitiv Datastream, Standard & Poor’s, TOPIX, J.P. Morgan Asset Management. All indices are total return in local currency, except for MSCI Asia ex-Japan and MSCI EM, which are in US dollars. Past performance is not a reliable indicator of current and future results. Data as of 31 August 2022.

However, the second half of the year looks more challenging. Even though EU natural gas inventories reported in August were in line with the 10-year average, thanks to more liquefied natural gas imports and the reactivation of coal-fired power stations, the substantial reduction in gas flows through the Nord Stream 1 pipeline has pushed European energy prices to new heights. In this context, German producer prices increased by 37.2% in July, their biggest increase on record, and the situation could further deteriorate on the back of logistic disruptions caused by droughts and heatwaves in both Germany and China.

Recession risks remain elevated, as shown by the weakness of the euro, which dropped to parity with the US dollar, and by the Flash Eurozone composite PMI, which dropped further into contraction territory at 49.2 in August.

In the UK, the Bank of England raised its policy rate by 0.5% to 1.75% at the start of the month. Even though the UK central bank now expects a recession to start in the fourth quarter, it warned of further tightening to contain inflation, which it expects to rise further to 13%. The August consumer price index (CPI) report didn’t ease the Bank of England’s concerns, as inflation reached 10.1% year on year in July, its highest level in 40 years. Second-quarter GDP declined by less than expected (-0.1% quarter on quarter, vs. -0.2% expected) while retail sales defied gravity with a 2.3% year-on-year gain. The August Flash Composite PMI declined by 1.2 points but just remained in expansionary territory at 50.9.

In the US, even though the economy has already recorded two consecutive quarters of negative economic growth this year, some economic data published in August was quite positive.

US employment data was surprisingly strong, with the non-farm payrolls print showing that 528k jobs were created in July compared to market expectations of only 250k. The details of the report were also positive as it showed that hiring had picked up significantly across sectors while the unemployment rate fell, and wages rose.

At the same time, inflation seems to have passed its peak as CPI increased 8.5% year on year in July, down from 9.1% in June. However, core inflation is still above the Federal Reserve’s (the Fed’s) target, which combined with strong wage inflation numbers, could force the Fed to raise interest rates by another 75bps when its rate-setting committee next meets in September. The Fed remains committed to curbing inflation, as evidenced by the rather hawkish speech that Jerome Powell gave at Jackson Hole at the end of the month. Consequently, the fed funds futures market is now pricing a nearly 75% probability of a 0.75% increase in September. The Fed’s hawkish stance continued to support the US dollar throughout the month, while weighing on equity and bond market returns. 10 year treasury yields rose sharply over the month to 3.2%.

So far, tighter monetary policy has been mainly reflected in a reduction in housing market activity, with existing and new homes sales falling 5.9% and 12.6% respectively in July as the 30-year fixed mortgage rate reached nearly 6%.

Finally, while retail sales and industrial production remained resilient in July, a fall in the August Flash US composite PMI to 45 suggests that recession risks remain elevated, even if the economy is not currently in recession. 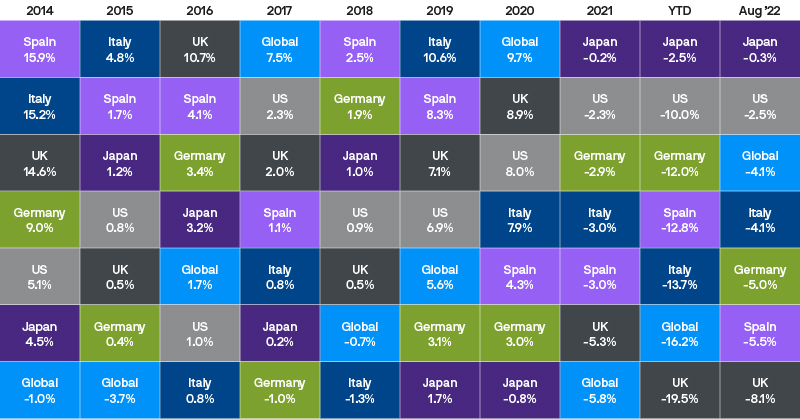 In China, the domestic economy continued to struggle over the summer amid weather-related disruptions. Economic data for July highlighted the softness of domestic demand amid lingering weakness in the housing market. Retail sales disappointed, contracting 0.3% month on month, while activity in the service sector also seems to have lost some momentum, as the service production index rose only 0.6% year on year, down from 1.3% in June.

Growth in total social financing and fixed investment also came in below expectations, which is somewhat concerning as the policy boost announced in recent months was supposed to support credit growth and infrastructure investment spending in the third quarter.

The People’s Bank of China (PBoC) eased monetary policy further by lowering its policy rate (the one-year medium-term lending facility rate) by 0.10% to 2.75%, and the one-year and five-year loan prime rates by 0.05% and 0.15% respectively. In addition, China’s State Council, chaired by Premier Li Keqiang, announced new measures worth 1 trillion yuan, to support the economy.

In this challenging economic environment, the CSI 300 index fell about 2% over August, while Chinese government bonds benefited from PBoC’s easing. 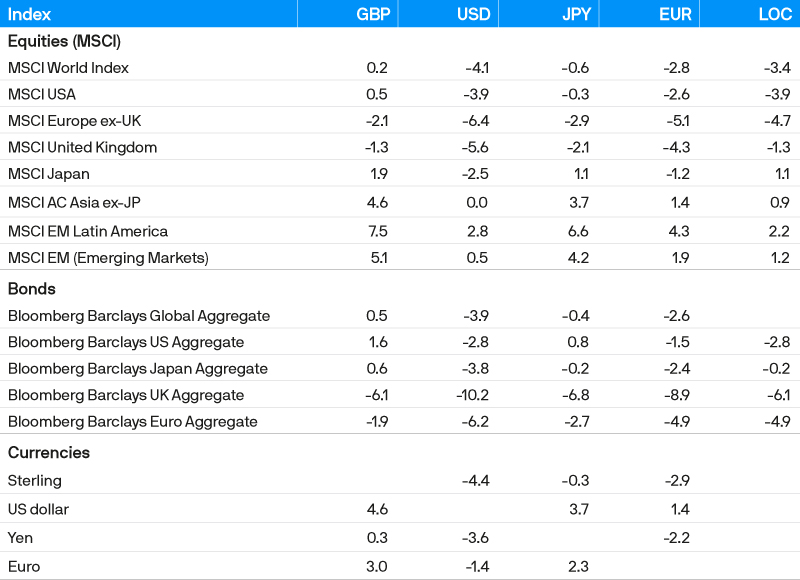 Source: Bloomberg Barclays, MSCI, Refinitiv Datastream, J.P. Morgan Asset Management. Past performance is not a reliable indicator of current and future results. Data as of 31 August 2022.

While the economic data in August was mixed, the Fed’s hawkish message from Jackson Hole amid ongoing risks to the growth outlook hurt both equity and bond markets. Concerns about the impact of the energy crisis in Europe, also weighed on returns.