Review of markets over July 2022 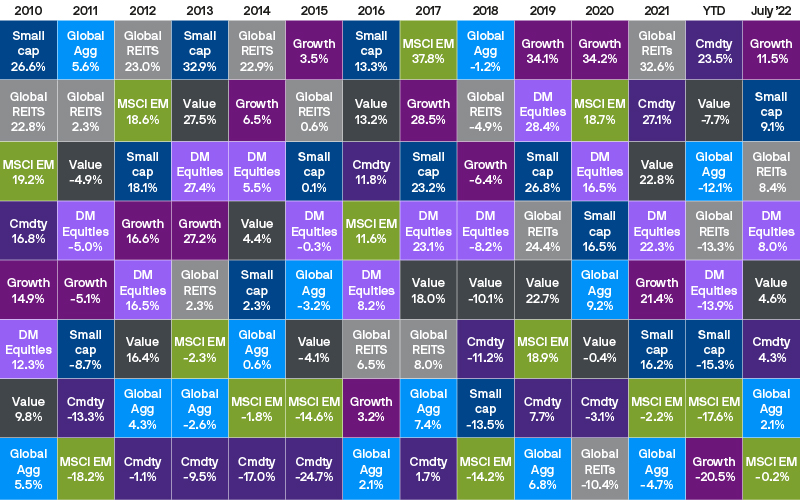 High inflation pushed the European Central Bank (ECB) to deliver its first interest rate hike in over a decade, taking the eurozone out of negative rates. To help ensure smooth transmission of monetary policy it also announced a new tool: the Transmission Protection Instrument (TPI). The TPI enables the ECB to purchase specific securities to counter “unwarranted market dynamics”. The tool is flexible by design, but the ECB is still yet to agree the criteria for activation. In the short term, the ECB will continue to depend on the flexibility of the Pandemic Emergency Purchase Programme to target its bond purchases.

The collapse of former ECB president Mario Draghi’s Italian government could be the first test of the new framework. Italian 10-year government bond spreads widened by 30 basis points over the month relative to German 10-year Bunds. 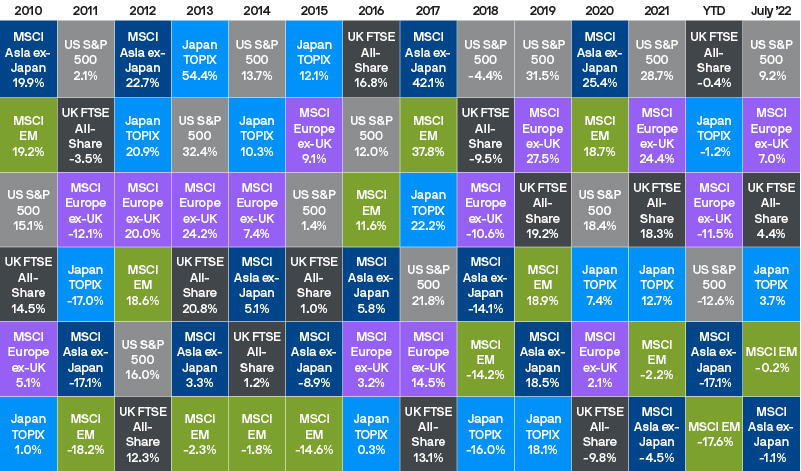 Source: FTSE, MSCI, Refinitiv Datastream, Standard & Poor’s, TOPIX, J.P. Morgan Asset Management. All indices are total return in local currency, except for MSCI Asia ex-Japan and MSCI EM, which are in US dollars. Past performance is not a reliable indicator of current and future results. Data as of 31 July 2022.

The other key issue facing Europe remained gas supply. Despite fears to the contrary, the Nordstream 1 pipeline reopened after its scheduled maintenance period. After initially restarting flows at 35% of 2020/2021 levels, Russia announced a reduction to 20% to enable repairs to a turbine. Germany rejected this explanation and gas prices rose sharply towards month-end in response to renewed fears of gas supply scarcity. To shore up domestic supplies, the European Commission requested that countries look to reduce their consumption by 15%, although this was met with disagreement from several members of the bloc, raising the risk of European disunity in the months ahead.

European recessionary risk was most apparent in currency markets where the euro briefly slipped below parity with the dollar before rallying slightly in response to the ECB’s move. Normally euro depreciation is positive for export driven European earnings, but given the recessionary risk is largely focused on gas disruption and the subsequent impact on production, the feedthrough in this scenario is less clear. This means 2022 European earnings growth estimates – currently 13.9% year-on-year – look vulnerable to downwards revisions. Eurozone Q2 GDP did however surprise to the upside, with the economy proving relatively resilient to the geopolitical headwinds so far.

In the UK, Prime Minister Boris Johnson resigned after he lost the support of his parliamentary party. The Conservative leadership race quickly narrowed the field down to two candidates: Rishi Sunak, the former chancellor, and Liz Truss, the current foreign secretary. Ahead of the final vote by the roughly 200,000 Conservative party members, Truss is leading in the polls. The winner, and next prime minister, will be announced on 5 September. While there are key differences on fiscal spending between the candidates, thus far investors appear to be paying little attention to the race. Ultimately the UK economy and markets will be more sensitive to global forces than the actions of the next occupant of No. 10.

The Fed increased rates by 75 basis points for the second consecutive meeting after headline inflation in July once again beat expectations, printing 9.1% year-on-year. Inflationary pressure in the stickier shelter and services elements continued to build. With its laser focus on inflation the Fed is unlikely to be willing to acknowledge the trade-off between growth and inflation that it faces until there are clear signs that headline inflation has turned lower.

In reaction to rising fears about a Fed-induced recession, the US yield curve inverted in July between 2- and 10-year yields, as yields on US 10-year Treasuries fell over the month. Compounding growth worries, July’s flash PMIs showed the US slipping into contraction with the composite index printing 47.5. This was due to a fall in the services sector which dropped to 47.0, while manufacturing remained in expansionary territory at 52.3. Q2 GDP added to growth concerns with real GDP growth printing -0.9% quarter on quarter. The weakness in the report was widespread with falls in construction, investment and government spending only partly offset by modest increases in trade and consumption. While two quarters of negative growth means the US is technically in recession, the strength of the labour market means that the National Bureau of Economic Research is unlikely to formally declare one at this stage. 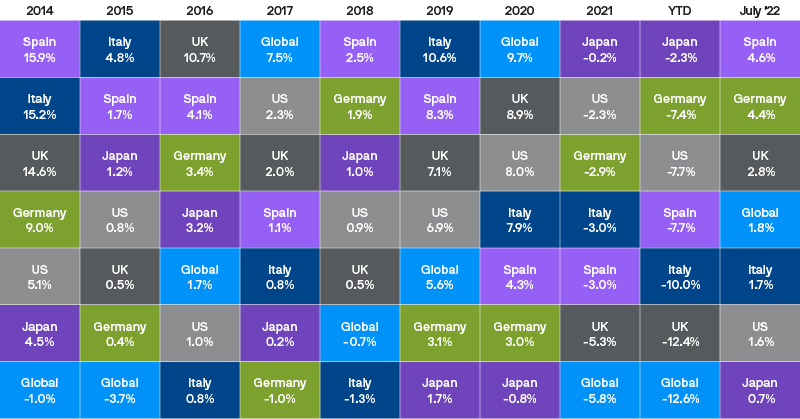 China continued to grapple with the Omicron outbreak and a series of rolling lockdown measures were enacted in various cities. There are still few signs of softening the zero-Covid policy, and we do not expect any major announcements until after the Party Congress in the autumn. Economic data, however surprised to the upside with Q2 GDP printing 1.0% year-on-year and, most importantly for the West, exports significantly beating expectations at 17.9% year-on-year. This contributed to an easing of supply chain pressures in the latest global PMI readings. 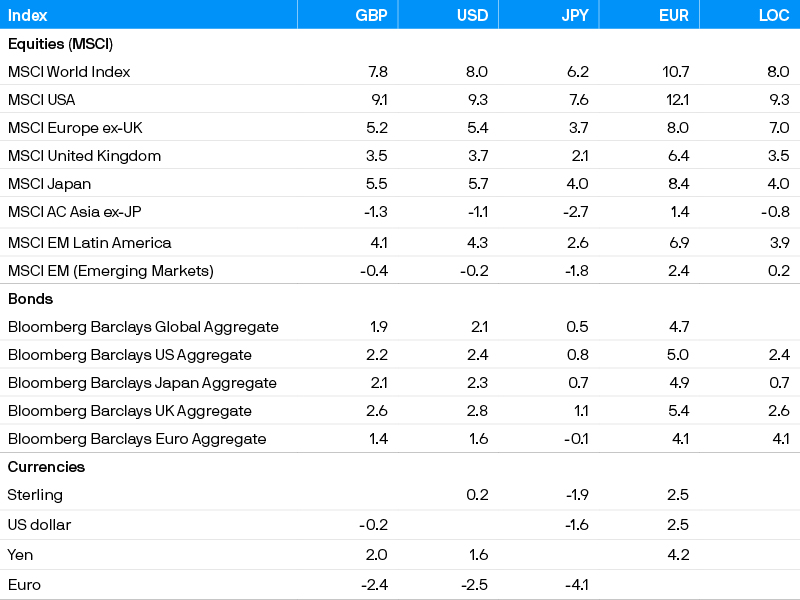 Source: Bloomberg Barclays, MSCI, Refinitiv Datastream, J.P. Morgan Asset Management. Past performance is not a reliable indicator of current and future results. Data as of 31 July 2022.

July saw the global economy start to feel both the full impact of high inflation, and central banks’ attempts to curb it. While the drivers are different, recession risk has risen in Europe and the US is technically already in one. Markets had previously moved ahead of the economy to price in a lot of bad news, and expectations of a central bank pivot meant risk assets delivered positive returns over the month. So far this year, much of the equity market decline has been driven by valuation de-rating. Earnings downgrades do pose further risks, but stock price declines now already look consistent with a modest downturn in profits.