At its monetary policy meeting on 1 November, the Reserve Bank of Australia (RBA) raised the Overnight Cash Rate (OCR) by 25bps to 2.85% (Fig 1a).  This was the seventh hike in the current cycle and the second smaller move, taking base rates to a nine-year high.  The central bank continued to justify its pivot to a slower cadence of rate hikes, observing that interest rates had already increased “materially since May”. However, it also recognized that inflation remains elevated and indicated further hikes were likely. 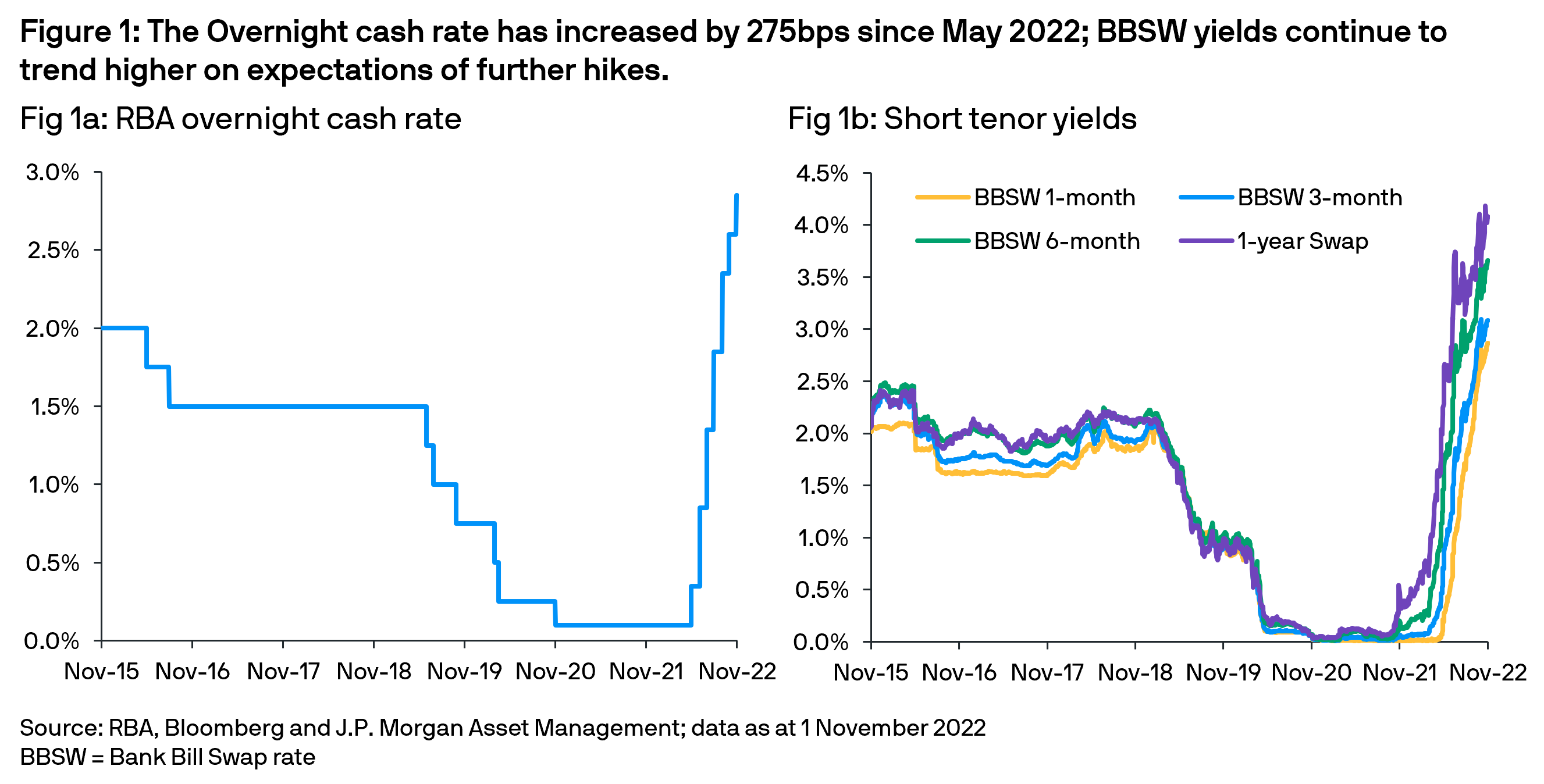 In its accompanying statement, the RBA bluntly noted that “inflation in Australia is too high” as the third quarter headline rate hit a three-decade high of 7.3% y/y (Fig 2a) on rising fuel, food and service costs.  With price pressures broadening, the central bank updated its CPI forecast, with inflation “forecast to peak at around 8% later this year”.  Optimistically, the RBA expects inflation to moderate to 4.75% in 2023 and 3% by 2024.  Concurrently, the bank acknowledged the “economy is continuing to grow solidly”, helped by robust exports and the bounce in services.  The latter is supported by consumer spending and a tight labor market with unemployment rate at a 50-year low of 3.5% (Fig 2b).

For the RBA, counteracting these assertions for a return to a fast pace of hikes is the deteriorating global economic outlook and negative impact of tighter financial conditions on Australian households.  Weaker consumer confidence, the delayed impact of higher mortgage rates and falling property prices all suggested caution as the central bank seeks to return inflation to its target range of 2%-3% while “keeping the economy on an even keel”.

Market reaction was muted with 25bps fully priced in and only a low probability of a 50bps anticipated.  The AUD increased slightly, while bond yields declined slightly and the curve flattened.  Investors expect the RBA to hike again in December and into 2023, with a terminal rate of 4.00%.

The contradiction between the RBA’s expectations that “a further increase in inflation is expected over the months ahead” and its commitment to a slower cadence of rate hikes was increasingly discernible following the release of the third quarter CPI data and the central bank’s acknowledgement that “strong domestic demand... is playing a role” in boosting inflation. Nevertheless, we believe the step down in the pace of rate hikes has created a high bar for the central bank to reverse its decision.

While the RBA confirmed that the size and timing of future rate hikes would be data dependent, it does expect “to increase interest rates further over the period ahead”, implying yields are likely to continue trending higher for the foreseeable future.