Hiking forcefully into a recession

At its monetary policy meeting on the 4 August, the BoE MPC voted to raise the Bank Rate by 50bps to 1.75% (Exhibit 1), marking the largest rate increase since the MPC’s independence in 1997. The vote was 8-1, with one member preferring a smaller 25bp move. The MPC deemed this to be an appropriate response to a tight labour market and elevated domestic cost and price pressures.

At the subsequent press conference, Governor Bailey acknowledged that the cost of living crisis and higher Bank Rate will disproportionately affect more vulnerable parts of the population, but reemphasised that the more forceful approach was necessary to “reduce the risks of a more extended and costly tightening cycle later”. Nonetheless, given the significant downgrade to the Bank’s growth forecast, Governor Bailey stressed that policy was “not on a pre-set path” and the appropriate Bank Rate would be decided at each meeting based on the Committee’s assessment of the economic and inflationary outlook. 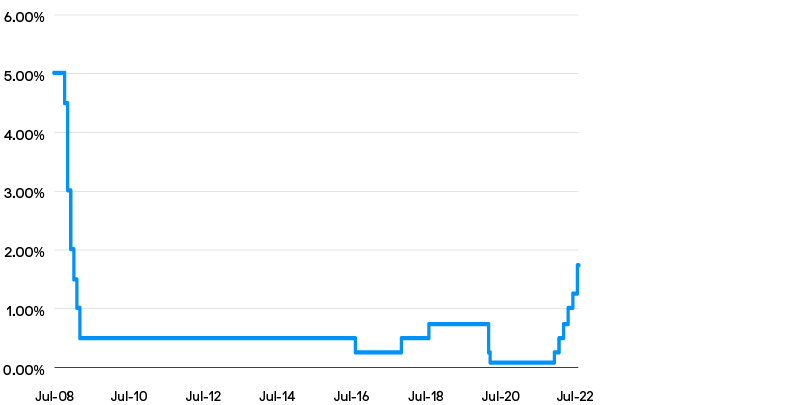 Inflation and recession in all scenarios

The August Monetary Policy Report (MPR) saw a significant upward revision of the BoE’s inflation forecasts. CPI (consumer price index) is now expected to peak at 13.3% in October (Exhibit 2), compared with the Bank’s previous forecast of 10% as recently as May, and will remain at “very elevated levels throughout much of 2023”. The energy price shock resulting from the Ukraine conflict was identified as the main driving factor, with UK gas prices doubling since May.

With markets now expecting a terminal Bank Rate of around 3%, the BoE expects UK inflation should return to the target level by the third quarter of 2024 (Exhibit 2). Interestingly, the BoE expects inflation to fall back to target by the fourth quarter of 2024 even if no further rate hikes occur as global commodity and tradable goods price decline. 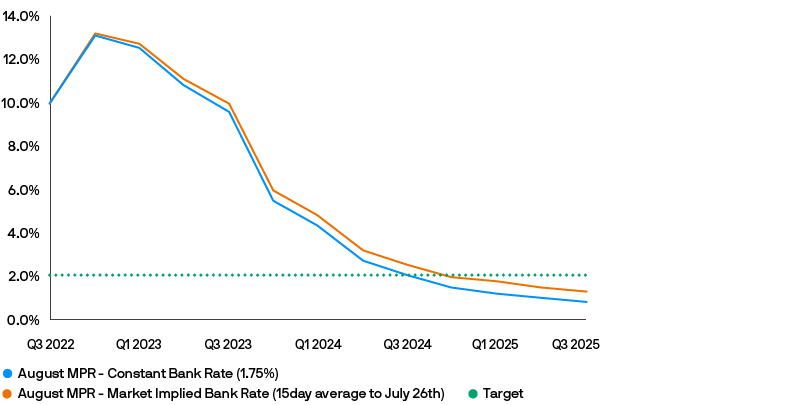 However, given the risks of inflationary pressures becoming embedded in the UK economy – with public and private sector workers already demanding wage increases – the MPC’s hawkish rhetoric of acting “more aggressively” is needed to “ensure that longer-term inflation expectations are anchored at the 2% target”.

In a major surprise, the MPR also forecasts the most severe growth outlook for the UK since the global financial crisis, predicting a five-quarter-long recession to start in the fourth quarter of 2022. Real household income is projected to fall sharply resulting in a 2.1% reduction in year-on-year GDP in the third quarter of 2023 (Exhibit 3). Meanwhile, the unemployment forecast was revised upwards and is expected to climb to 5.5% by the third quarter of 2024 based on market implied rate expectations. 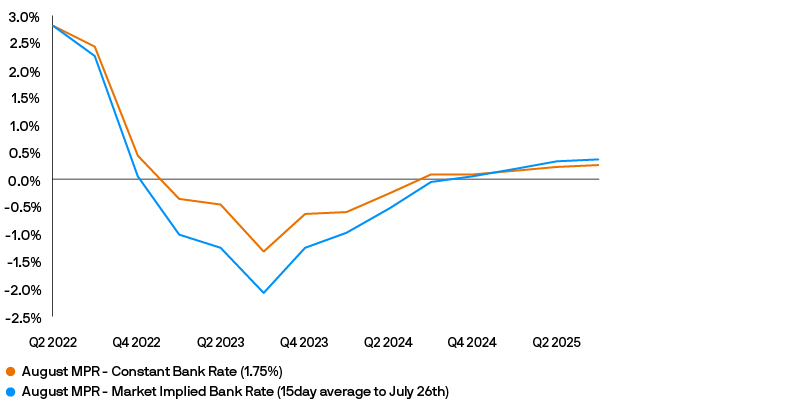 Although the report highlighted that the risks around the MPC’s projections were “exceptionally large at present”, all the Bank’s models confirmed the likelihood of “very high near-term inflation, a fall in GDP over the next year and a marked decline in inflation thereafter”.

The BoE released further details about its strategy for selling UK government bonds held in the Asset Purchase Facility (APF). The Bank expects to commence gilt sales shortly after its September meeting “subject to economic and market conditions”. A total reduction of around £80 billion in the stock of gilts is expected over a one year period, comprising of roll-off of maturing assets and supplemented by active sales of around £10 billion per quarter.

Concurrently, the BoE announced the launch of a new short-term open market operation (OMO) program – the Short Term Repo facility (STR) – to help ensure that short-term market interest rates remain close to the Bank Rate. The facility is also designed to provide liquidity to the market and as a way for counterparties to access reserves as necessary.

Since the beginning of the BoE’s tightening cycle in late 2021, short term yields in the UK have risen and the curve has steepened significantly (Exhibit 4). Following the latest hike, the yield on overnight deposit and repo rates stepped up, while the 3 month-12 month short term rates curve flattened out as markets digested the BoE’s sobering new growth forecast, and suggesting that we may be approaching the end of this tightening cycle. 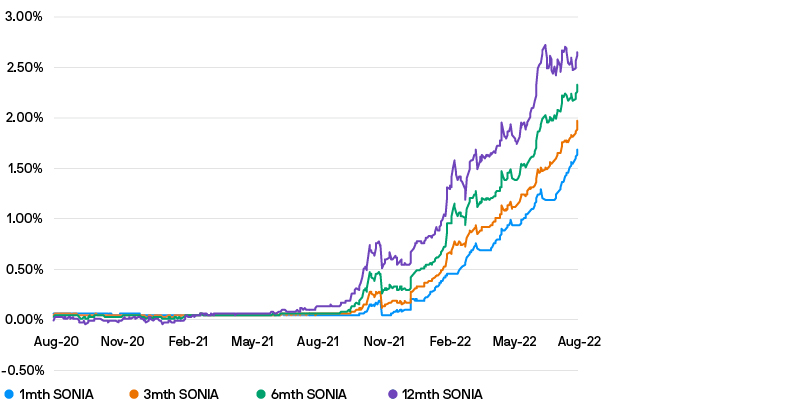 Sterling cash investors will welcome this further increase in Bank Rate as improved overnight rates allow liquidity strategies to boost returns – albeit with a slight delay due to the need to reinvest term maturities.

Recession expectations and the BoE’s pivot away from a predetermined path of policy rates suggests that bond markets will continue to exhibit high levels of volatility, hence a disciplined approach to cash segmentation is warranted such that sterling investors can optimise returns without excessive exposure to capital losses. JPMorgan’s sterling liquidity strategy – being the most conservative and shortest duration strategy – is well-positioned for the BoE’s continued tightening cycle and maintain a high level of flexibility to pivot in response to the anticipated economic downturn.

Similarly, JPMorgan’s sterling managed reserves strategy has been positioned at its historically shortest duration, to capture additional yield from BoE’s hiking cycle and avoid capital losses as rates curves repriced higher. Given this strategy’s slightly longer duration compared to the liquidity strategy, cash investors seeking to capture the current levels of high yields over a longer time horizon may consider stepping-out into the sterling managed reserves strategy, which will run at a relatively longer duration going into the anticipated recession in the next few quarters.