Review of markets over May 2022

Investors had to stomach a difficult first quarter and those hoping the arrival of spring would herald a sea change will have been disappointed. Markets did at least end the month broadly flat but there was significant intra-month volatility. The key macro risks of war in Ukraine, tightening monetary policy and Covid restrictions in China remain, and markets lacked a clear catalyst for a change in sentiment.

After a painful April, investors gained some respite with the MSCI All Country World rising by 0.2% in May. This was complimented by positive global bond returns of 0.3%. Value stocks were the best performing asset class returning 2.2% over the month.

Commodities continued to perform well returning 1.5% over the month with oil and wheat prices continuing to rise. Growth stocks continued to struggle off the back of valuation compression and several high-profile earnings warnings. Real estate was the worst performing asset class as leading indicators suggested the US and UK housing markets are starting to slow.

A large weighting to the energy sector continued to benefit UK equities. The FTSE 100 remains the only positive equity market year-to-date with returns of 1.5%. 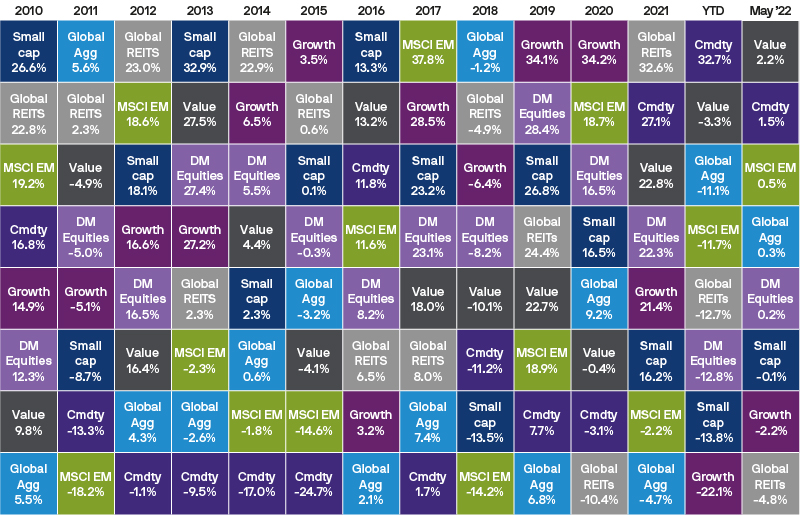 The war in Ukraine continued with no sign of resolution. While there have been calls for a diplomatic solution the current redlines laid out by both sides seem incompatible. Europe decided to embargo Russian seaborne oil, which raises the risk that Russia might retaliate by further reducing the supply of gas to Europe. Gas prices for winter futures contracts held steady at elevated levels.

Labour markets continued to tighten. UK unemployment fell to the lowest level since 1974, while eurozone unemployment is now the lowest on record. This supported an acceleration in wage growth in both economies, but with inflation very high, real wages remained negative.

Other economic data was more downbeat. The UK May business surveys softened markedly with services particularly weak. This was coupled with the lowest consumer confidence reading on record and a contraction in March GDP of -0.1% month on month. The Bank of England raised the UK base rate to 1.00% in May, and with headline inflation at 9.0% year on year (y/y), it is likely they will raise rates by 25 basis points (bps) again in June. They will be mindful though that with the consumer outlook weakening the risks to the economic outlook have risen. On the plus side, the Chancellor’s package of measures to help with rising energy bills will provide significant support to lower income households. The squeezed middle will remain rather squeezed though.

European consumer confidence, while still low, improved in May and business surveys were resilient. This should give the European Central Bank more confidence in raising rates in the face of inflation at 8.1% y/y. President Lagarde clarified the bank’s position indicating a first rate hike was likely in July, along with an end to asset purchases early in Q3 2022 and an exit of negative rates by the end of Q3 2022. 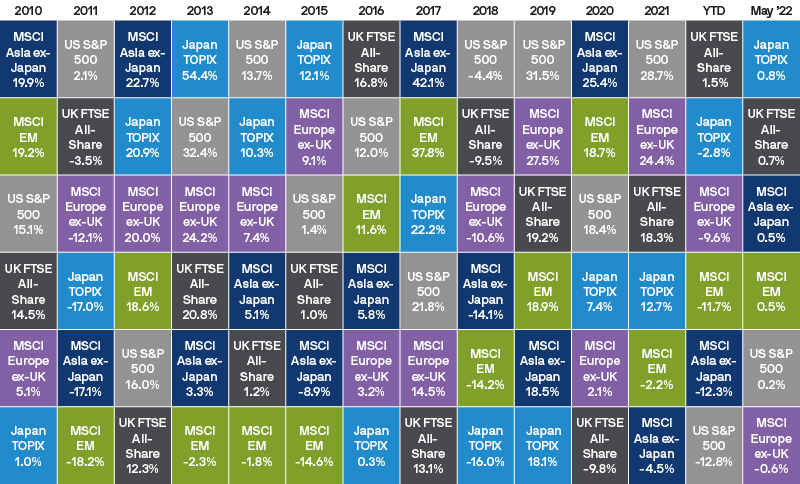 Source: FTSE, MSCI, Refinitiv Datastream, Standard & Poor’s, TOPIX, J.P. Morgan Asset Management. All indices are total return in local currency, except for MSCI Asia ex-Japan and MSCI EM, which are in US dollars. Past performance is not a reliable indicator of current and future results. Data as of 31 May 2022.

Having previously signalled its intent to ‘walk the walk’ on inflation, the Federal Reserve (Fed) increased rates by 50bps in May. Having been pre-warned in April, this hike was in line with market expectations and so did not prompt a jump in US yields. The market is now pricing another two sequential 50bps hikes in June and July. Excluding a deterioration in the outlook it is likely the Fed will deliver these. Messaging from the Fed evolved over the month. Initially Chairman Powell adopted a more hawkish tone stating the Fed wouldn’t hesitate to raise rates beyond neutral and signalling that it was willing to accept an increase in the unemployment rate from its historically low 3.6% to achieve its inflation target. Headline inflation came in above expectations but fell marginally to 8.3% y/y. Over the month, risks to growth increased and as the month ended messaging from the committee became more mixed. This introduced volatility into the market towards the end of the month as it struggled to decide what the path for future rate hikes beyond July is. 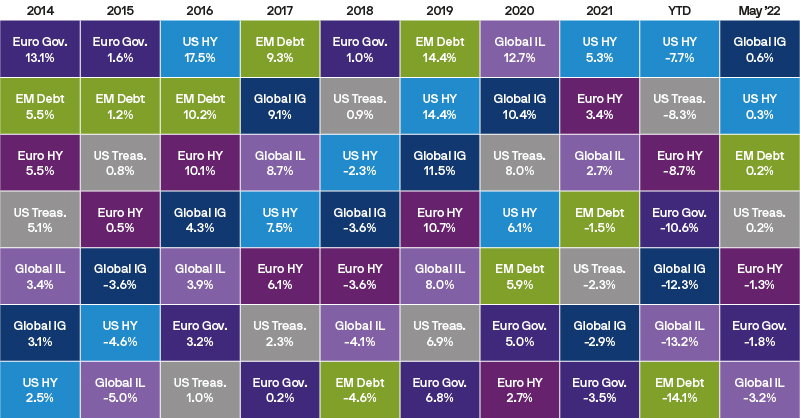 China continued to grapple with the Omicron variant. Shanghai spent most of May in lockdown, though as the month progressed some reopening occurred. Officials announced a gradual general reopening will take place over June. Outside of Shanghai, outbreaks forced Beijing and Tianjin to tighten restrictions. Chinese credit growth slowed during May as banks, concerned about the worsening economic situation, cut back on loan issuance. In response, the People’s Bank of China put pressure on them to increase loan issuance and cut a key mortgage reference rate by 15bps to support house prices. For western countries though the good news was that Chinese exports surprised to the upside at 3.9% y/y. 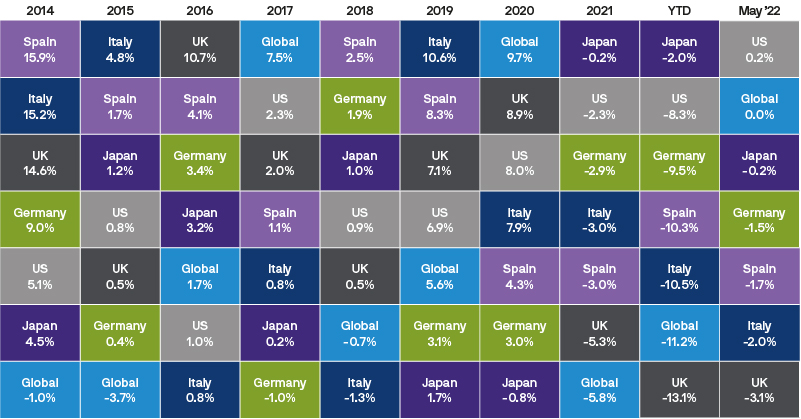 May failed to provide the catalyst that markets are waiting for. Central banks are continuing to grapple with inflation. But they are now even more conscious of rising growth risks, which remain higher in Europe than the US. Labour markets remain tight but with real wage growth negative the squeeze on consumers remains. Margins started to come under pressure, particularly in consumer facing companies and pricing power is likely to be a key driver of relative equity performance moving forward. 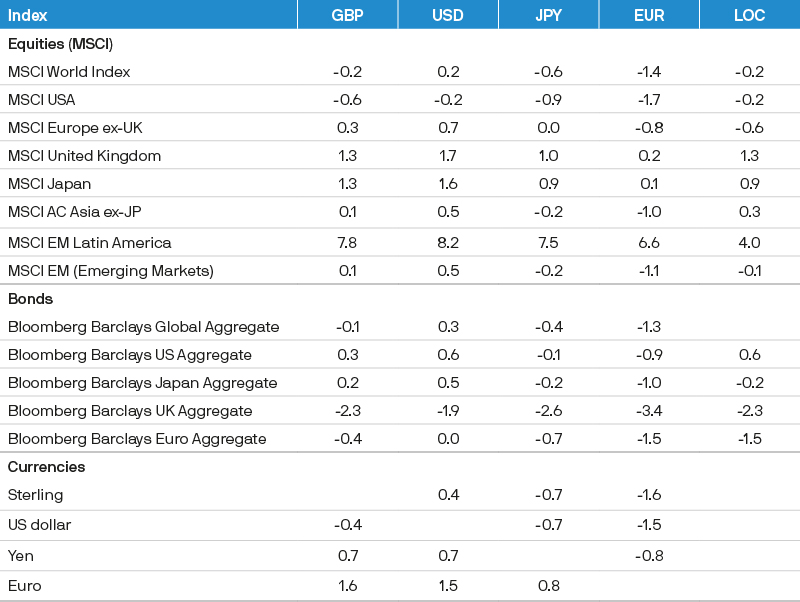 Source: Bloomberg Barclays, MSCI, Refinitiv Datastream, J.P. Morgan Asset Management. Past performance is not a reliable indicator of current and future results. Data as of 31 May 2022.