Should I be concerned about the correction in U.S. equities?

U.S. equities suffered a significant selloff this week, with the S&P 500 down 12.0% from its February 19th peak. This is the quickest correction – defined as a pullback of at least 10.0% – in stock market history, occurring over just six trading days. The correction has been primarily driven by concerns around the spread of COVID-19 and its impact on the global economy. More specifically, while the spread of the virus seems to have somewhat slowed in China, the real concern for markets is the pickup in cases outside of China. The large increase of new cases in Italy and Europe more broadly, South Korea, the Middle East and South America provides a significant downside risk to global economic growth during the first half of this year, and potentially longer. That said, the impact on the economy is likely to only be transitory.

As equity markets price in these risks, the movements has so far have been driven by sentiment, rather than fundamentals. That has manifest itself in lower valuations; prior to this pullback, the S&P 500 forward P/E ratio was sitting at 19.0x, but since then has fallen to 16.7x. On the other hand, 1Q20 earnings estimates have only come down -3.3% since the beginning of the year, compared to an average downward revision of -3.1%, suggesting that the potential impact of COVID-19 is yet to be incorporated into earnings estimates. Overall, we expect that there will be a greater impact on corporate earnings than on the broader economy given the amount of S&P 500 revenues derived internationally and the greater sensitivity to secondary effects, such as supply chain disruptions.

This risk aversion has led investors to flock to safe haven assets, such as U.S. Treasuries. Both 10-yr. and 30-yr. U.S. Treasury yields hit new all-time lows this week at 1.30% and 1.79%, respectively. This move lower in yields is confirmation that traditional core fixed income continues to be a diversifier for portfolios when equity markets fall prey to an idiosyncratic shock. From a policy perspective, the futures market is currently pricing in a 100% chance that the Federal Reserve (Fed) cuts interest rates by 25bps at their next meeting on March 18th . The problem, however, is that the Fed is unlikely to have sufficient data related to the impact of COVID-19 on the U.S. economy to justify a rate cut, but may ultimately give in due to the tightening in financial conditions and desire to ease market anxiety.

So where does this leave us? Sentiment, and thus valuations, are likely to keep markets relatively contained until there is further clarity about the duration and extent of the outbreak. However, this pullback gives investors that were looking to add risk, but concerned about valuations, an opportunity to do so through equities or credit. At the same time, it serves as a reminder of the need to diversify and mitigate volatility. 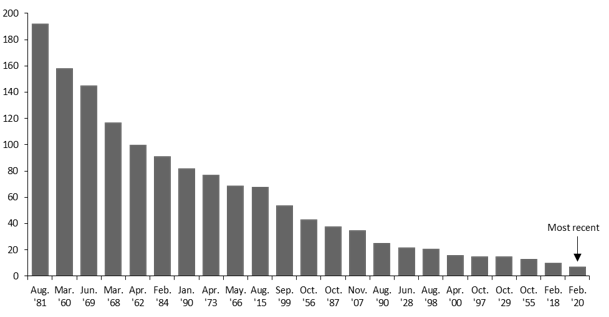