The investment implications of the 2020 election

Investors should consider policies could impact markets and the economy after of the 2020 election.

Presidential campaigns are always drawn out in the U.S., but the run-up to the 2020 presidential election has already felt unusually long, with more than 20 candidates vying for the Democratic nomination at its height. Meanwhile, in a politically polarized nation, races for control of both the Senate and the House of Representatives will likely be tight. Although divided government is one likely outcome, maps for the Electoral College and House districts and the Senate seats up for election all favor the Republicans, making a Republican sweep in terms of control a real possibility, even if the Democrats win a narrow victory in the popular vote.

Still, as political temperatures rise, investors should not let how they feel about politics overrule how they think about investing. Despite slightly lower returns and higher volatility in election years, returns have usually been solid. That being said, different political outcomes would result in different policies over the next few years and investors should consider how these policies could impact markets and the economy in the aftermath of the 2020 election.

The road to November 3rd

Voters will head to the polls on November 3rd to elect the next President and Congress, but there are many major milestones that will occur before then (Exhibit 1). The primary season kicks off on February 3rd with the Iowa caucuses which helped launch the presidential campaigns of Jimmy Carter and Barack Obama among others. The Iowa caucuses are followed by the New Hampshire primary, the first actual primary, on February 11th. The Nevada caucuses and South Carolina primary round out the February races, and are both thought to somewhat balance the less diverse Iowa and New Hampshire contests with constituencies that are comparatively more representative of the broader population.

EXHIBIT 1: The likely Democratic nominee may not be clear until mid-year given the wide field of Democratic candidates. 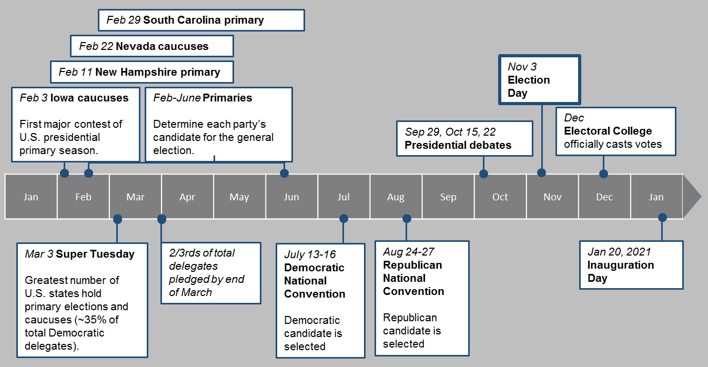 This sets the stage for Super Tuesday on March 3rd, the biggest single day of races where approximately 35% of the total Democratic delegates, who will eventually go on to represent voters at the Democratic National Convention, are selected. Twenty-nine states and territories vote in the primaries in March, so by the end of the month, around two-thirds of the delegates will have been selected. However, it is important to recognize that Democratic delegates are been selected under proportional representation in this cycle. With such a wide field of Democratic candidates still vying for the nomination, it is quite possible that no candidate will have a majority of the delegates entering the Democratic Convention which is being held in Milwaukee from July 13th to July 16th.

At the convention, while the 3,979 delegates selected in primaries and caucuses are required to vote for their assigned candidate on the first ballot, they will be free to do otherwise in later rounds of balloting. Moreover, in the second and subsequent rounds of balloting they will be joined by 771 super-delegates who are largely party insiders. This could tilt the nomination towards a more moderate Democrat, although the ability of the party to unite around such a nominee could have a big impact on the Democrats chances in November.