The U.S. commercial mortgage loan (CML) market is a $4.4 trillion sector of the U.S. fixed income universe. For comparison, Treasuries stand at $18.4 trillion, and corporate debt outstanding is about $10.0 trillion, while the muni market is approximately $3.0 trillion.

Banks traditionally have been the dominant player in the CML field: they hold $2.3 trillion of commercial mortgages on their books, just over one-half of all CMLs. Another $0.7 trillion is held by government-sponsored enterprises (GSEs) – Ginnie Mae, Fannie Mae and Freddie Mac – or by agency- and GSE-backed mortgage pools; obviously, these are mortgage loans against multifamily residential properties only.

Insurance companies claim the third spot with $0.6 trillion, almost all of it held by life companies (96%). CMBS issuers account for about $0.4 trillion of CMLs, and the remaining $0.5 trillion are held by all other types of lenders: REITs, pension plans, etc1.

Exhibit 1 shows the top 50 geographic exposures for the U.S. life insurance industry, ranked by dollars invested in CMLs. The top 10 metropolitan statistical areas (MSAs) on the left are colored purple.

It should be evident that the life insurance industry’s investments in CMLs are dominated by a handful of MSAs. To further illustrate this point, Exhibit 2 shows the largest (by invested assets) U.S. life insurers that have at least 4% of their asset portfolios in CMLs. For each company, the bar represents the percentage of its CML portfolio in its 10 most significant MSAs. The white number inside the bar indicates the size of its CML portfolio as a percentage of total invested assets. Clearly, virtually every one of these companies has a meaningful allocation to at least some of the industry’s top MSAs: New York, Los Angeles, Washington DC, Chicago, etc. 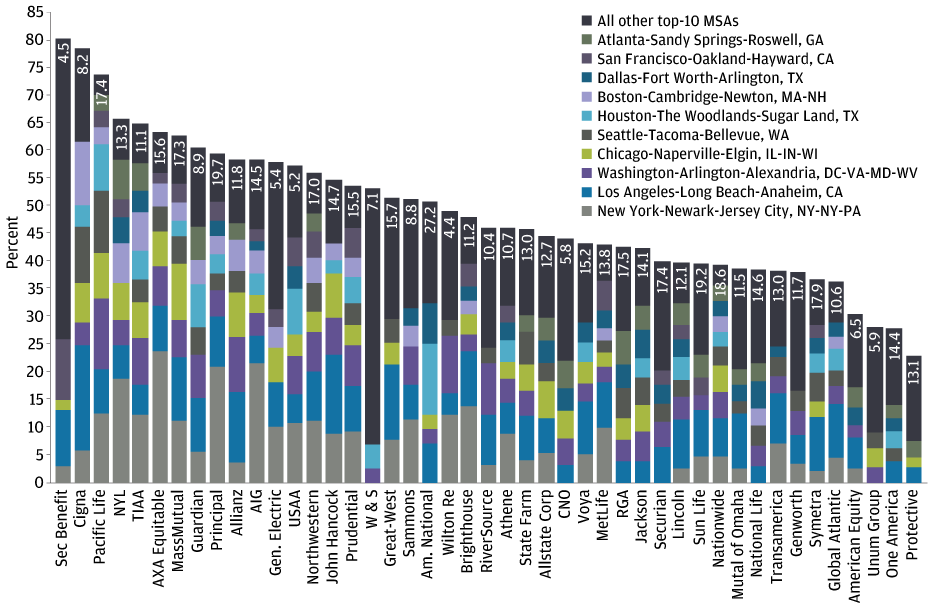 Therefore, a typical large life insurer has nearly 50% of its CML portfolio allocated to just 10 MSAs, and on average almost 70% of that is invested in the same top 10 industry MSAs, while only 30% is in “other” MSAs, outside of the life insurance industry’s top 10 list. This causes insurers to be exposed not only to the same geographic areas but also to the same sectors of the economy.

In fact, it turns out that through their CML holdings, insurance companies have a surprisingly similar exposure to economic sectors, as Exhibit 3 shows. To arrive at this conclusion, we obtained the MSA GDP statistics from the U.S. Bureau of Economic Analysis2, which includes detailed breakdowns by industries, economic sectors and subsectors, as well as by calendar year. We then calculated each economic sector’s historic average weight in each MSA. Knowing CML allocations to various MSAs for each insurer, we calculated CML exposures to sectors of the economy in each MSA. The final step was adding these exposures together to arrive at the total economic sector exposure for each insurer. For each company, five years of data is shown, 2014-2018. 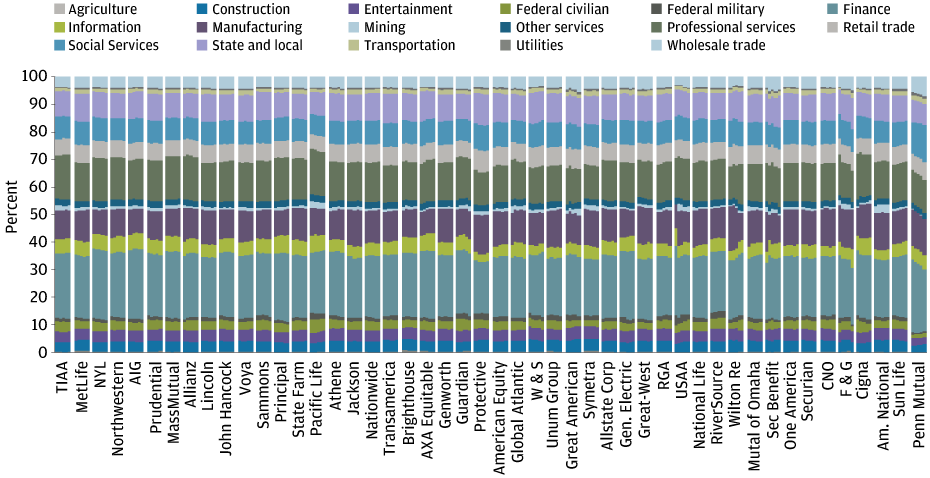 Zeroing in on the life insurance industry’s top MSAs again – the 10 leftmost MSAs colored purple in Exhibit 1 – Exhibit 4 shows a subset of the above large life insurers with the highest concentration of CML holdings in those 10 MSAs, for which these holdings also represent a significant percentage of their statutory surplus (white numbers inside the bars). 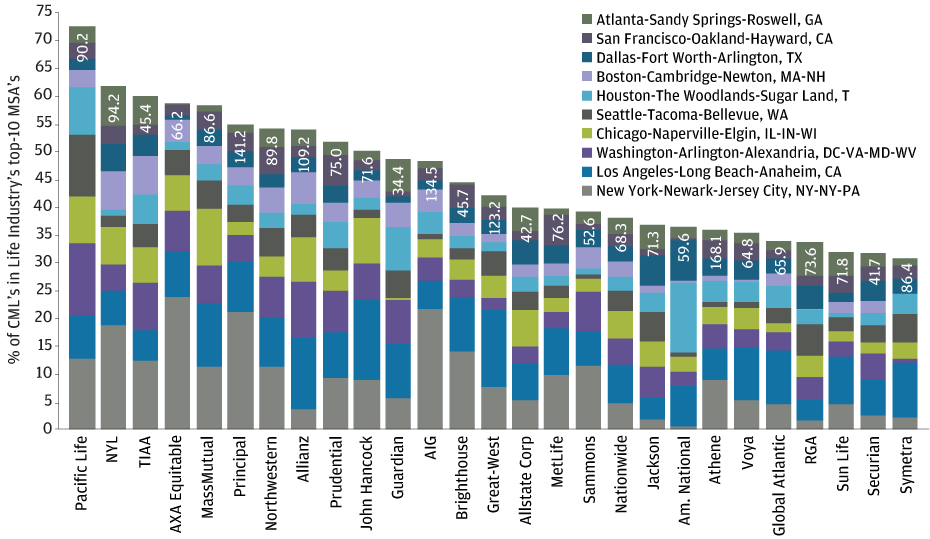 These companies are the ones most concentrated geographically, and their surpluses may be vulnerable to a real estate downturn and/or economic downturn in just a few key areas. A diversification approach, such as that offered by J.P. Morgan’s broad middle market CML strategy, would help reduce this risk.

Finally, a few observations about the P&C industry’s CML investments. Traditionally, few P&C insurers invest in CMLs, and those that do tend to be companies that currently or historically have/had a relationship with a life insurer. Exhibit 5 shows all P&C insurers with CML dollar allocations (represented by numbers inside the bars) in excess of $100 million. These 15 companies account for $17.3 billion out of $18.2 billion total P&C industry CML holdings, or over 95%. 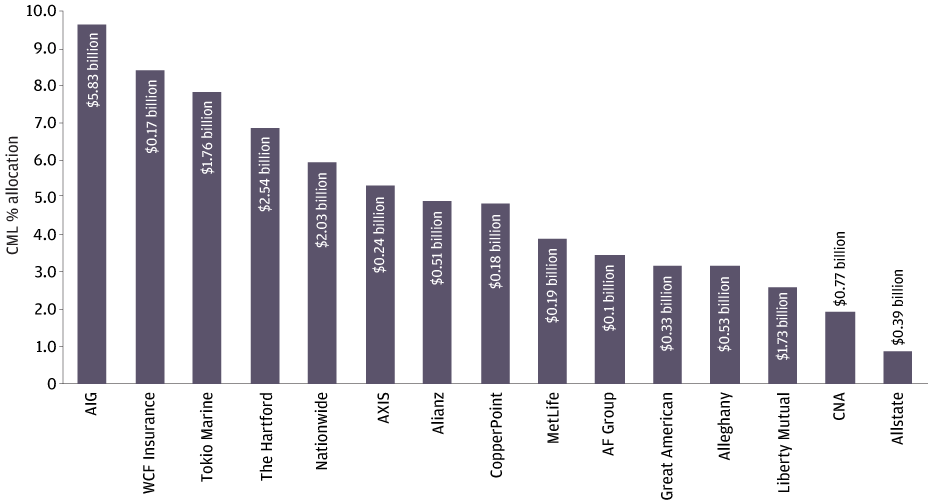 We conclude by again emphasizing that most large U.S. life insurers place a significant portion of their CML holdings in just a few key MSAs. This causes them to be exposed to the same geographic areas and the same sectors of the economy. For these companies, it would be prudent to diversify into additional MSAs; J.P. Morgan’s middle market CML strategy can help them achieve this goal.

As for the P&C companies, they are not traditionally big investors in CMLs. However, many of them may consider this asset class for additional diversification and income. For example, those P&C insurers who wish to reduce their muni holdings, yet are averse to adding more corporates to their balance sheets, should find CMLs to be an appealing alternative at their disposal. In particular, CMLs would benefit P&C companies with excess liquidity; a link to a life insurer would facilitate making this allocation. In the absence of this link, J.P. Morgan’s CML strategy can fill the gap.

If you work at an insurance company and are interested in seeing detailed results for your company or a peer group, please contact your J.P. Morgan Asset Management client advisor or email Insurance_Strategy_and_Analytics@jpmorgan.com.