Since the financial crisis, for a relatively liquid investment CLOs consistently have had the highest spreads net of capital costs for US life insurers.

Since the financial crisis, for a relatively liquid investment CLOs consistently have had the highest spreads net of capital costs for US life insurers. Most large life insurers built up allocations to CLOs of 3%-5% of total assets, starting around 2013.

Comparing YE2017 to YE2018 CLO holdings for the life insurance industry in total, we see that allocations to CLOs were up in dollar terms – from $71.0B to $91.6B – but also as a percentage of assets (from 1.9% to 2.3%). Since most insurance companies grew their invested assets in 2018, this means that CLO allocations increased more than assets in general. However looking at changes in total industry level holdings obscures widely divergent behavior in CLO investments among individual life insurers.

In the chart below, we show all life insurers that had at least 4% of their assets in CLOs at either YE2017 or YE2018. We plot allocations to CLOs for YE2018 vs YE2017. The bubbles are sized according to total assets for each insurer as of YE2018. We note that almost all of these companies further increased their CLO holdings in 2018. The only exceptions were Security Benefit, Guggenheim, and Hannover Life who reduced their CLO holdings in dollar terms. 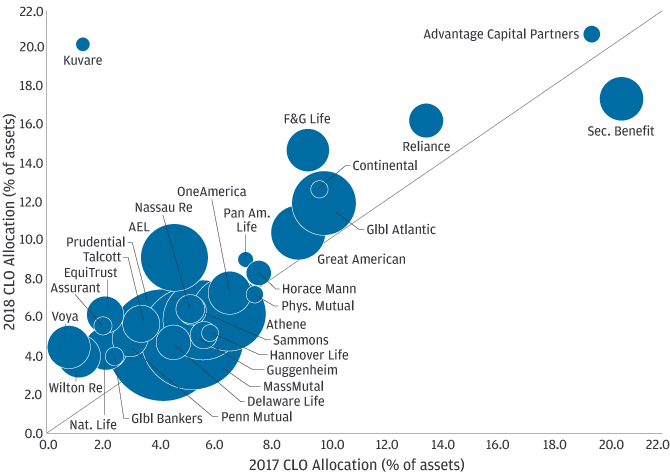 Some of the smaller life insurers with significant allocations to CLOs were acquired in the past few years and the increased CLO allocation was part of the new owner’s investment strategy. The chart below illustrates this point. It shows individual Life entities with at least 10% in CLOs at either YE2017 or YE2018. Again, the size of each bubble is proportional to total YE2018 assets for each entity. 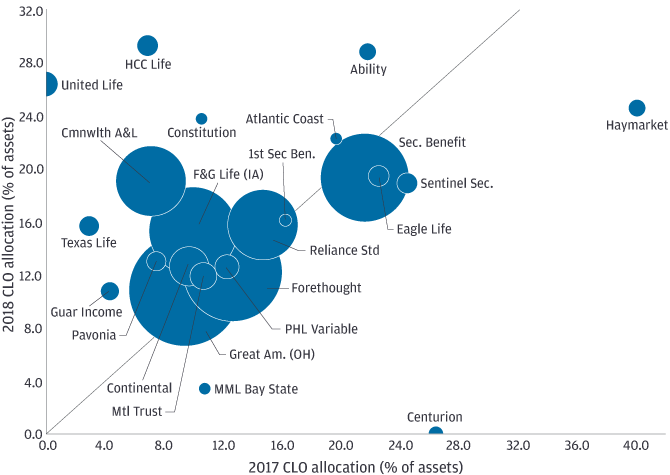 Within CLOs, life insurance investments cover a wide range of credit quality. Below we show the book yield for the CLO portfolios for all life insurers that had CLO allocations exceeding 3% of total invested assets at YE2018. The bar chart indicates contributions to book yield by NAIC rating. Those who have higher book yields tend to have allocations to NAIC 2 and NAIC 3 CLO debt. Note that the majority of insurers predominantly hold NAIC 1 CLOs and have correspondingly lower book yields. 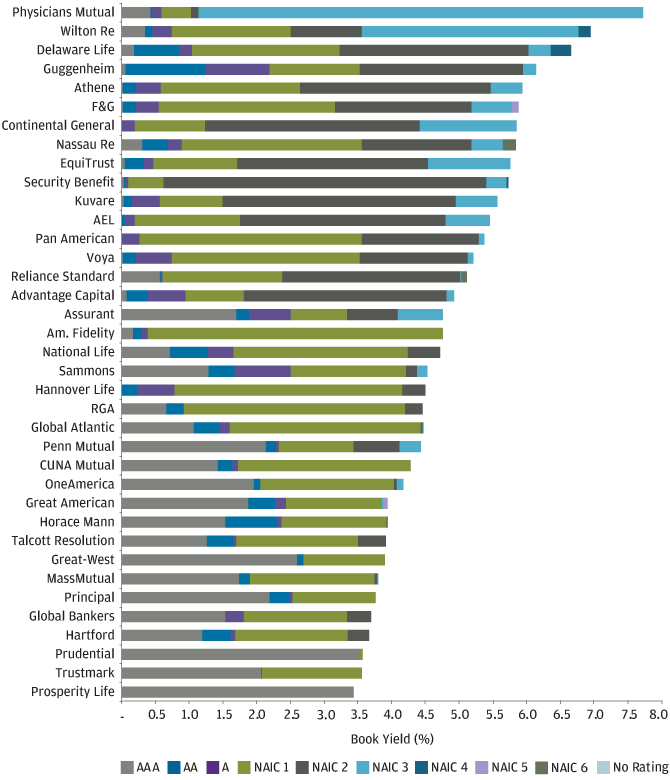 Source: J.P. Morgan and SNL Financial
For NAIC 1 CLOs where we have NRSRO ratings, we show the split between AAA, AA, and A. For CLOs labeled as NAIC 1, that indicates that we do not have the NRSRO rating.

Within the NAIC 1 category, yields on CLOs vary dramatically between A, AA, and AAA ratings. We find that most insurers even avoid A-rated CLOs and most portfolios are a combination of AAA/AA (see EXHIBIT 4). 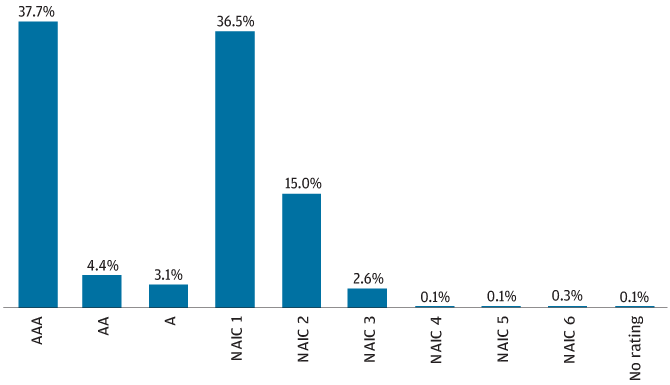 Source: J.P. Morgan and SNL Financial
For NAIC 1 CLOs where we have NRSRO ratings, we show the split between AAA, AA, and A. For CLOs labeled as NAIC 1, that indicates that we do not have the NRSRO rating. 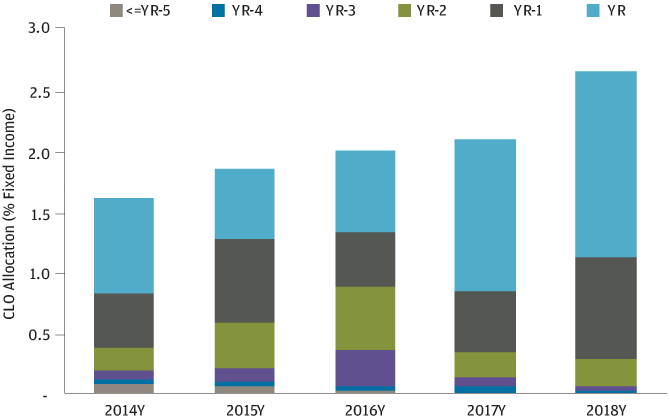 As a concluding remark, we wanted to note the underwriting deterioration in the leveraged loan market. Up to 85% of all leveraged loans are covenant-lite; this is especially worrisome as markets are entering late stages of the economic cycle. Despite this deterioration, though, and in view of the Fed’s continued tightening, demand for CLOs has been strong in recent years due to CLOs’ attractiveness as a hedge against rising rates. In the November 2018 issue of the “CLO Outlook 2019”, JP Morgan forecasted $135bn of new CLO issuance for 2019. Therefore one might have expected that as the Fed has signaled a pause in December and again in January, some of that CLO attractiveness would have waned. However, CLO issuance remained robust: through May 10, 2019, YTD new issuance was $46.8bn, which gives us an estimate of about $130bn for entire year, assuming the pace stays unchanged. It remains to be seen whether CLO market will cool off in the second half of 2019 due to other economic or political developments, e.g. uncertainty of the trade war with China.