Were there any V-shaped recoveries from the COVID recession?

Going forward, China will have to continue to shift its economy towards its new model, one based on domestic consumption and private investment, in things like innovation and clean energy.

When the pandemic first hit in early 2020, many letters were thrown around to describe the recession and subsequent recovery. A “V-shape” was the best option – a rise back to the previous peak that was as sharp as the decline had been. In the end, were there any V-shaped recoveries from the COVID recession? There is only one example around the world: China. By the end of the second quarter, China’s economy was already back to its late-2019 level. Over 2020 as a whole, China’s economy actually grew +2.3%. Elsewhere, such as in the U.S., recoveries took on a “V-interrupted” format. This shape illustrates how the economy began its recovery in the third quarter, but still ended 2020 with a level beneath its previous peak. For 2020 as a whole, we expect the U.S. economy to have contracted by -3.5%.

This step back in the size of the U.S. economy and the step forward in China’s has accelerated our estimate for when China will surpass the U.S. to become the largest economy in the world. We now expect this to occur in 2027 instead of in 2029. However, what propels China’s economy over the next few years will have to be very different than what helped it to grow in 2020. Last year, China’s V-shaped rebound was driven by its old drivers of growth: production, exports, and public investment on real estate and infrastructure. Going forward, China will have to continue to shift its economy towards its new model based on: domestic consumption and private investment in innovation and clean energy. In fact, these are the key areas of focus of the Chinese government’s 14th Five Year Plan, which covers the time period of 2021 to 2025. This detailed plan is set to be formally approved by China’s top legislature in March.

It is not only China’s economy that is big and getting bigger. China’s equity and bond markets are also the second largest in the world. Crucially, China has continued to open up its capital markets to foreign investors, making China significantly more investable today compared to only five years ago. Despite its scale and openness, Chinese equities and bonds are still underrepresented in global investors’ portfolios. Their representation is only set to grow in both the “60” and the “40” in diversified portfolios, as investors come to appreciate the solutions Chinese markets can offer for growth, income, and diversification. 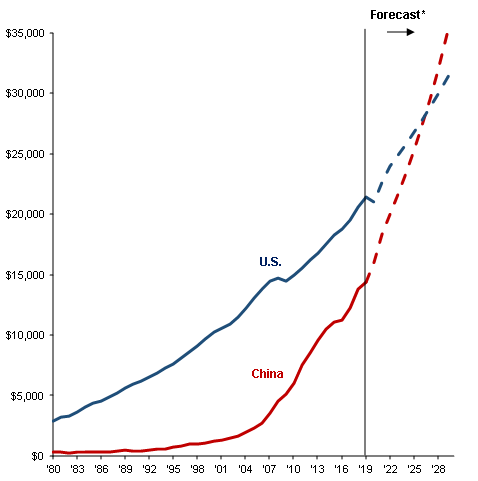