Mystery no more: Portfolio allocation, income and spending in retirement

How do people manage their income and spending in retirement? How do they adjust their asset allocation as they transition into retirement? Certainly, there is survey data on the subject and much informed speculation. Yet the full picture—based on empirical evidence that shows how people actually behave—has remained elusive.

Drawing on an Employee Benefit Research Institute (EBRI) database of more than 23 million 401(k)1 and IRA accounts, and JPMorgan Chase data for around 62 million households, we studied 31,000 people as they approached and entered retirement between 2013 and 2018.2

This data offers the very first holistic financial view of households in transition. From it, we created a rich mosaic showing retirees’ income, spending and wealth. Real data about real behaviors, we believe, can deliver the most useful insights.

The research reaffirmed some of our assumptions and in other ways proved surprising. Here are three key takeaways:

What characterizes the 31,000 retirees we studied?

Dialing down investment risk after retirement

There has been a lot of speculation about whether and how people change their asset allocation when they roll over their 401(k) balances. Our data indicates that change was the norm: As many as 75% of retirees—a bigger majority than we would have expected—decreased their portfolios’ equity concentration after rollover. The median decline: 17 percentage points. The greater the equity share in the 401(k) allocation, the more significantly participants derisked, as can be seen in Exhibit 1.

EXHIBIT 1: MEDIAN EQUITY ALLOCATION CHANGE AFTER ROLLOVER BY THE EQUITY SHARE IN A 401(K)

To illustrate the impact of de-risking at an inopportune time, we compare the experiences of two hypothetical 401(k) participants. Each had to retire sooner than expected due to issues related to COVID-19 and rolled over assets in April 2020. (More baby boomers retired in 2020 than in past years, and the unemployment rate for Americans age 65 and up soared to 7.5%, the highest on record.6)

At retirement, one participant’s portfolio was bond-heavy (40% equity/60% bond) and the other’s was stock-heavy (60% equity/40% bond). As Exhibit 2 shows, the bond-heavy participant rolled over at the same asset allocation; the participant had de-risked prior to reaching retirement age and fully participated in the April market recovery. Meanwhile, the stock-heavy participant reduced equity exposure by 20% through a rollover, locked in March market losses and didn’t participate fully in the April recovery. At the end of 2020, we see a 5% difference between the two—a significant gap when compounded over the many years of retirement.

A rollover and de-risking at an inopportune time may have a significant impact on retirement success.

Source: J.P. Morgan Asset Management. Returns for both scenarios are based on hypothetical portfolios, assumed to be invested in the MSCI All Country World Index and the Barclays Capital U.S. Aggregative Index. The assumptions are presented for illustrative purposes only. They must not be used, or relied upon, to make investment decisions. There is no direct correlation between a hypothetical investment and the anticipated future return of an index. Past performance does not guarantee future results. *Based on MSCI All Country World Index.

Relying on RMDs for withdrawal guidance

As we’ve noted, RMDs were the prevailing withdrawal “guidance” for the retirees we studied. Of that group, around 80% of those younger than RMD age7 were not taking withdrawals. About 84% of those subject to RMDs took only the required amount. Interestingly, people who don’t take any distribution before their RMD age had much less observable retirement wealth (roughly a quarter) than those who were taking early withdrawals. This suggests that the need to efficiently draw down wealth is more critical for this less wealthy segment of the population.

Yet the RMD approach has some clear shortcomings. It does not generate income that supports retirees’ declining spending in today’s dollars, a behavior that we see occurs with age. In fact, the RMD approach tends to generate more income later in retirement and can even leave a sizable account balance at age 100 (Exhibit 3).

This finding underscores the importance of a goals-based planning approach. People tend to do well when they manage their money based on their goals, time horizon and risk tolerance. In principle, this means taking on greater investment risk (and potential return) for assets intended for the end of a projected lifetime that could be 20, 30 or even more years away (for example, long-term care or a bequest). Meeting those goals, if applicable, should not be left to chance, dependent on what is left over after RMDs are taken. The assets should be managed more proactively.

On the consumption front, we believe the most effective way to withdraw wealth is to support actual spending behaviors, as spending tends to decline in today’s dollars with age. Unlike the RMD approach, reflecting actual spending allows retirees to support higher spending early in retirement and achieve greater utility of their savings, as Exhibit 3 shows.

In summary, the RMD approach doesn’t solve for any specific retirement outcome. Indeed, it can fall short of meeting the goals for consumption and longer-term objectives, if applicable.

The RMD approach is inefficient. It does not generate income that supports retirees’& declining spending behavior and may leave a sizable account balance at age 100.

EXHIBIT 3A: SPENDING IN TODAY'S DOLLARS ASSUMING $100,000 IN STARTING PORTFOLIO VALUE: THE RMD APPROACH VS. THE DECLINING CONSUMPTION APPROACH

EXHIBIT 3B: REMAINING PORTFOLIO VALUE IN TODAY'S DOLLARS: THE RMD APPROACH VS. THE DECLINING CONSUMPTION APPROACH

Source: J.P. Morgan Asset Management. Required minimum distributions are based on 2022 proposed table. Returns are based on a hypothetical portfolio, assumed to be invested 40% in the MSCI All Country World Index and 60% in the Barclays Capital U.S. Aggregative Index. Market performance simulation based on J.P. Morgan’s Long-Term Capital Market Assumptions and the charts show 80% confidence level based on 10,000 simulations across various market scenarios. The assumptions are presented for illustrative purposes only. They must not be used, or relied upon, to make investment decisions. There is no direct correlation between a hypothetical investment and the anticipated future return of an index. Past performance does not guarantee future results.

Income and spending in retirement

Not surprisingly, income and spending in retirement are highly correlated, a reminder of the importance of a sustainable withdrawal rate. At two junctures—receiving the first monthly Social Security payment and taking the first RMD—both income and spending tended to increase among our retiree cohort (Exhibit 4). The Social Security payment is more likely additional income that is spent, but because RMDs can materially change the tax picture of a household, higher RMD spending could be a combination of additional funding and greater taxes owed.

As income increases with the start of Social Security and RMDs, spending increases.

We note that households with regular income from an annuity and/or a pension spend more even if they have similar levels of observable retirement wealth (Exhibit 5). This may be because they have greater retirement means (in the form of the annuity and/or pension). But other research studies of JPMorgan Chase customers show that households with similar means spend more when they have a higher level of regular income. They likely feel more comfortable spending as a result.

Households with regular income from an annuity and/or a pension spend more. 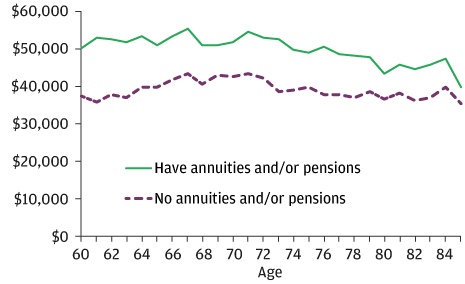 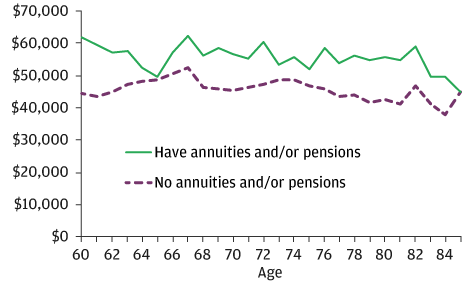 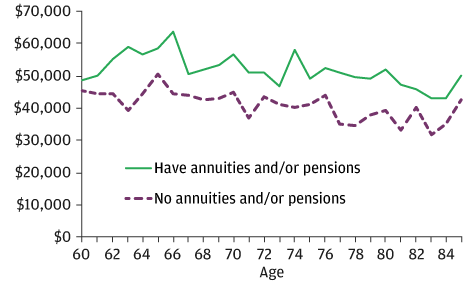 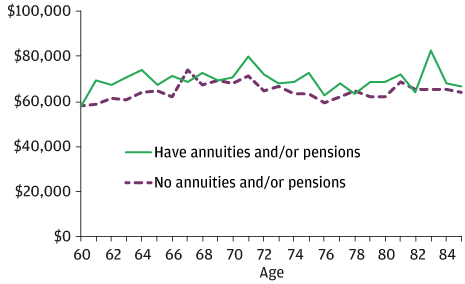 Turning wealth into a stream of income is a critical part of retirement planning, but it is not something most retirees can manage on their own.

It’s critical that a 401(k) have a prudent level of risk at retirement so as not to lock in market losses if a rollover occurs at an inopportune time. As we saw in Exhibit 1, the greater the equity share of 401(k) portfolios, the more de-risking happens through a rollover; participants with greater than 40% equity in their 401(k)s de-risked at the median level.

Once retirement is underway, in order to meet regular consumption needs a more flexible, dynamic approach to withdrawals—one that supports the actual spending behaviors—can be more effective than simply taking RMDs.

For many 401(k) plan participants, an in-plan retirement spending offering may be quite helpful. In our July 2021 plan participant survey, 85% of respondents said that they would likely leave their balances in their plans post-retirement if there was an option to help generate monthly retirement income.

Finally, we come back to basics. As our own research has shown, focusing on real data about actual behaviors—taking in the full picture of retirees’ income, spending and wealth—can lead to the most effective retirement solutions.

1 Since 1996, EBRI has collaborated with the Investment Company Institute (ICI) in the collection of 401(k) plan data.
2 Source: “In Data There Is Truth: Understanding How Households Actually Support Spending in Retirement,” Employee Benefit Research Institute & J.P. Morgan Asset Management.
3 Based on a sample of 3,922 people who rolled at least 60% of their 401(k) assets over to an IRA.
4 May not include annuities purchased in IRAs, due to the difficulty of classifying flows out of IRAs.
5 Source: Asset estimates for de-identified and aggregated households supplied by IXI/Equifax, Inc.
6 Source: Bureau of Labor Statistics, unemployment rate of 65 years and older from 1948–2020.
7Analysis was completed using 2013–18 data, when the beginning age for required minimum distributions was 70½.

This paper was produced by J.P. Morgan Asset Management (JPMAM) alone and includes JPMAM’s view only. The Employee Benefit Research Institute (EBRI) was not involved in the writing of this paper. The paper is informed by research from a previous publication that was a joint collaboration between JPMAM and EBRI.

In an ongoing collaborative effort, the Employee Benefit Research Institute and the Investment Company Institute (ICI) maintain the EBRI/ICI Participant-Directed Retirement Plan Data Collection Project, which is the largest, most representative repository of information about individual 401(k) plan participant accounts. ICI is the leading association representing regulated funds globally, including mutual funds, exchange-traded funds (ETFs), closed-end funds and unit investment trusts (UITs) in the United States, and similar funds offered to investors in jurisdictions worldwide. While this paper uses data from the EBRI/ICI database, ICI did not participate in the research collaboration between EBRI and J.P. Morgan Asset Management and was not involved in the writing of the inaugural report or this paper.

EBRI is not affiliated with JPMorgan Chase & Co. or any of its affiliates or subsidiaries.

DATA PRIVACY: We have a number of security protocols in place which are designed to ensure all customer data are kept confidential and secure. We use reasonable physical, electronic and procedural safeguards that are designed to comply with federal standards to protect and limit access to personal information. There are several key controls and policies in place which are designed to ensure customer data are safe, secure and anonymous: (1) Before J.P. Morgan Asset Management (JPMAM) receives the data, all selected data is highly aggregated and all unique identifiable information, including names, account numbers, addresses, dates of birth and Social Security numbers, is removed. (2) JPMAM has put privacy protocols for its researchers in place. Researchers are obligated to use the data solely for approved research and are obligated not to re-identify any individual represented in the data. (3) JPMAM does not allow the publication of any information about an individual or entity. Any data point included in any publication based on customer data may only reflect aggregate information. (4) The data are stored on a secure server and can be accessed only under strict security procedures. Researchers are not permitted to export the data outside of JPMorgan Chase’s (JPMC) systems. The system complies with all JPMC Information Technology Risk Management requirements for the monitoring and security of data. (5) JPMAM provides valuable insights to policymakers, businesses and financial professionals, but these insights cannot come at the expense of consumer privacy. We take every precaution to ensure the confidence and security of our account holders’ private information.

Designed to provide financial professionals, plan sponsors and individuals with the insights and tools they need to make informed retirement decisions.

This year's survey results offer clear insights into what participants want from their employers when it comes to their retirement plans.