The annuity advantage in a new normal economy: Part 2

It is from this fact that annuities derive their most basic advantage. An insurance company can distribute money based on average life expectancy, while an individual funding their own retirement, would have to take a smaller income each year if they wanted to be 95% sure that they didn’t run out of money. We also noted that this annuity advantage was even more important in a “new normal” economy, with low expected returns, since more of the distribution from a retirement plan would be in the form of returned principle.

However, annuities have a second critical advantage that is also more important in a low return environment.

Suppose, having dismissed the actuary from your birthday celebration, you now turned to your favorite market strategist and asked them to tell you, year-by-year, the expected returns from the stock and bond markets over each of the next 21 years. They would, of course, tell you that that was impossible to say, but they could give you a pretty good estimate of average long-term returns.

It is from this fact that annuities derive their second basic advantage.

The problem, for an individual paying themselves an income out of their retirement plan, is that how long that money lasts depends crucially on the particular year that they begin to take income from the plan. If you start taking income just before a bull market, no problem. But if your first year of distribution is at a market peak, then the combined effects of distributions and losses could reduce your savings so much that you don’t have enough left to benefit from a market rebound and so you eventually run out of money. An insurance company, that can remain fully invested in the market due to new contributions and that can average over many market cycles can avoid this risk. And today, when returns going forward are expected to be much lower than in the past, this difference is even more important.

For example, since 1950, if someone had been invested in a 60/40 stock bond portfolio they could have enjoyed average returns of 9.5%. This number is truly impressive (and very unlikely to be repeated going forward) – but it is an average. In Exhibit 1 below, we show how that number would have varied each year since 1950. What’s more, the timing of withdrawals would have been important. If an investor had invested $500,000 and withdrawn 9% of their original stake each year, they would still have had money in their account at the end of 21 years in 35 of those 47 periods. The problem is the other 12. 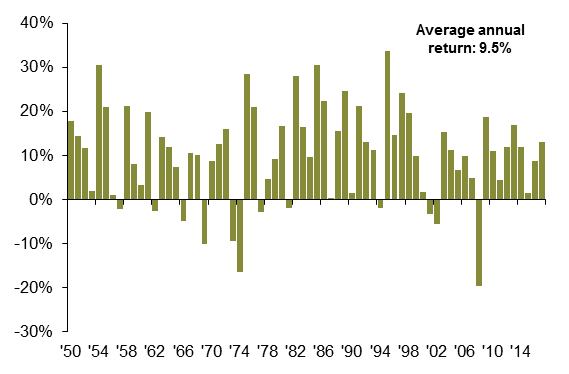 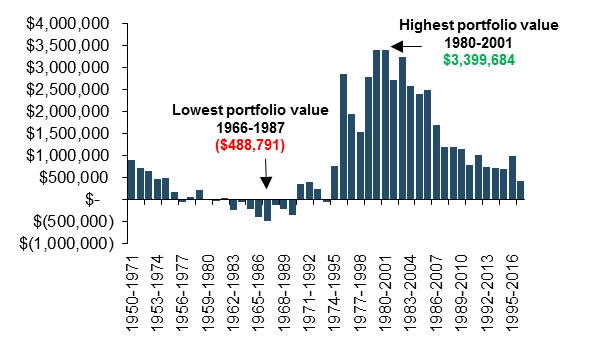 Source: Barclays, Bloomberg, FactSet, Federal Reserve, Robert Shiller, Strategas/Ibbotson, J.P. Morgan Asset Management. Returns shown are based on calendar year returns from 1950 to 2017, blended 60% stocks and 40% bonds. Stocks represent the S&P 500 Shiller Composite and bonds represent Strategas/Ibbotson for periods from 1950 to 2010 and Bloomberg Barclays Aggregate thereafter. Average life expectancy of 21 years based on Centers for Disease Control estimates. Data are as of November 20, 2018.

Since an insurance company can stay fully invested in the market throughout your retirement, and can invest over multiple market cycles, an annuity should be able to provide a significantly better income in retirement, independent of the issue of life-span.

Finally, it is worth noting that this advantage will be even more important going forward. While a 60/40 portfolio has produced an annual return of 9.5% over the past 68 years, few expect it to do as well going forward.

Suppose instead we assume that such a portfolio produces just 5.5% over the next 10 to 15 years. If such a portfolio had the same volatility as has been seen over the past 68 years, then a withdrawal rate of 6% of the original principal would have a more than 20% chance of resulting in an investor running out of money within 21 years. Conversely, an insurance company, by staying fully invested and averaging over cycles, should be able to provide such an income very comfortably.

In summary, the annuity advantage does not depend just on the ability of an insurance company to average over life-spans but also on its ability to stay fully invested through the ups and downs of many market cycles and as the gradual withdrawal of funds by one group of investors is replaced by the fresh money of a new group.

In a new normal economy, these annuity advantages are more important than ever. Some may be tempted to invest for themselves throughout their retirement. However, the uncertainties they face around both their own life-spans and the swings in markets as they draw down their retirement savings, highlight the advantages of a steady annuity income over the speculations of both actuaries and market strategists.

If you invite an actuary to a 65th birthday party-- I wouldn't actually recommend it-- but suppose you do that. And as you're blowing out the candles, you ask him, how long am I going to live? How many more times do I get to blow out the candles? The truth is he won't be able give you an answer.

The average person turning 65 today, if you average over gender and wealth and health, the average is about 21 years. So on average, you can expect to live to about 85 or 86. The problem is that there's a 5% chance that you'll live to age 96 or above.

And so he won't know the answer to that. But if you ask him instead of the 10,000 other people who are celebrating a 65th birthday today, how long will they live? Suddenly, he'll have the answer. Oh, it's about 21 years.

And that means that as an insurance company pays out, it can actually afford to pay out a bigger annual payment than an individual could pay themselves if they wanted to be sure they didn't run out of money. And that's the basic advantage of an annuity.

The second advantage that an annuity has over somebody who does it themselves is that you can average not just over different lifespans but actually over different market cycles. If you retire at the end of a bear market, that is actually a pretty good time to retire. Because as the market begins to move up again, the value of your portfolio may move up even as you pull money out.

But if you retire at the end of a bull market when stocks are very high, the danger is that stocks could fall enough in the first few years of your retirement that you actually run out of money. But an insurance company offering annuities can actually average over market cycles. So they are invested throughout your retirement, unlike the individual investor who will be pulling money out as a retirement proceeds.

In the past-- going back to 1950-- we've seen very good returns from both stocks and bonds. And that means that if you've been taking an income in retirement, either because you did it yourself or from an annuity, you could get a pretty good return on your money. But going forward, we believe that the returns on both stocks and bonds will be much more modest than they have been in the past.

That means that the extra income that you can get from an annuity-- because an annuity company can average over market cycles and doesn't have to worry about markets falling sharply at the start of retirement-- that extra money is that more important to a retiree today.

This document is a general communication being provided for informational purposes only. It is educational in nature and not designed to be used as advice or a recommendation for any specific investment product, strategy, plan feature or other purpose in any jurisdiction, nor is it a commitment from J.P. Morgan Asset Management or any of its subsidiaries to participate in any of the transactions mentioned herein. Any examples used are generic, hypothetical and for illustration purposes only. This material does not contain sufficient information to support an investment decision and it should not be relied upon by you in evaluating the merits of investing in any securities or products. In addition, users should make an independent assessment of the legal, regulatory, tax, credit, and accounting implications and determine, together with their own professional advisers, if any investment mentioned herein is believed to be suitable to their personal goals. Investors should ensure that they obtain all available relevant information before making any investment. Any forecasts, figures, opinions or investment techniques and strategies set out are for information purposes only, based on certain assumptions and current market conditions and are subject to change without prior notice. All information presented herein is considered to be accurate at the time of production, but no warranty of accuracy is given and no liability in respect of any error or omission is accepted. It should be noted that investment involves risks, the value of investments and the income from them may fluctuate in accordance with market conditions and taxation agreements and investors may not get back the full amount invested. Both past performance and yields are not reliable indicators of current and future results.