2Q22 Earnings: Where have all the earnings gone?

The market got the Fed wrong

2022 has been a challenging year for equity markets, as the macroeconomic picture continues to be characterized by slower growth, persistent inflation, as well as tighter monetary and fiscal policy. Despite this, risk assets rallied in July as investors misinterpreted comments from Jerome Powell following the Federal Reserve (Fed’s) July meeting. Markets seem to expect the Fed will cut rates in 2023, but a hot July jobs report, coupled with the fact it will take time for inflation to subside, has increased the probability that the Fed will continue to move aggressively in September.

Against this backdrop, earnings will remain the primary driver of returns. With 90% of S&P 500 Index market capitalization reporting, we are currently tracking earnings per share (EPS) of 47.25 USD for the second quarter. 70% of companies have beaten earnings estimates while 63% have beaten revenue estimates; revenue beats are tracking above their long-run average, while earnings beats are tracking below. In a similar vein, revenue surprises have been larger than average, while earnings surprises have been below average.

The end of earnings season has seen aggregate earnings estimates deteriorate due to write downs, which is reminiscent of 2015/2016 when a significant and sustained gap emerged between operating and pro forma earnings. These write downs show up in margin weakness, and account for the full percentage point decline in margins this week. In the event, many investors have been asking us which earnings they should look at; the market prices off of pro forma earnings, adjustments can make it more difficult to compare current earnings to prior periods.

While we understand the thinking behind some of the pro forma adjustments, we prefer to measure corporate profits using operating earnings, as not all of the adjustments being made seem appropriate. The table below highlights some of the differences between these three measures.

Difference in earnings measures lead to differences in growth rates

Source: Compustat, FactSet, Standard & Poor's,  J.P. Morgan Asset Management.
2022 EPS are estimates. The 2022 pro-forma estimte are from FactSet Market Aggregate consensus estimates.
The operating earnings and reported earnings estimates are from Standard & Poor's and are based on 85% of companies having reported 2Q22 earnings.
Data are as of August 8, 2022.

Earnings in the consumer discretionary sector are tracking a year over year (y/y) earnings decline of 22.2% but a y/y revenue increase of 11.3%, as higher prices increase sales, but higher costs weigh on consumer demand and profit margins. Despite the decline in profitability, actual results are coming in above analyst expectations. In fact, 67% of stocks in the consumer discretionary sector have recorded an earnings beat.

Within the sector, auto companies have performed well due to pricing power. While supply is improving, firms did note that inventories were not fully recovered to their pre-pandemic level due to the chronic lack of chips. According to Susquehanna, in 2Q22, semiconductor lead times averaged ~27 weeks, well above the historical average of 17 weeks. Looking ahead, however, auto companies have reaffirmed their full year guidance despite supply constraints, with management teams confident of an improving outlook. Hotels have reported positive earnings performance too, primarily driven by the global reopening and renewed demand in travel. On the other hand, restaurants and clothing retailers have struggled due to higher freight costs, higher food prices, and continued port congestion.

The surge in natural gas and oil prices since the start of the year has boosted earnings for the energy sector, which is currently tracking y/y operating earnings growth of over 300%. During the second quarter, crude oil and natural gas prices were, on average, up 65.0% and 153.6% y/y. The economic reopening in tandem with Russia’s invasion of Ukraine continues to put a strain on supply amid elevated demand. In the U.S., a tight labor market and rapid reopening has made expanding refinery capacity difficult – adding further upward pressure on prices. According to data from the Energy Information Administration, at the start of 2022, the number of operating refineries stood at 125, below the pre-pandemic number of 132 in 2019. Furthermore, the operable refinery capacity, as measured in million barrels per day, stood at 17.9 at the start of the year, its lowest level since 2014.

Operable and operating refinery capacity in the U.S.

Capacity at the start of each calendar year 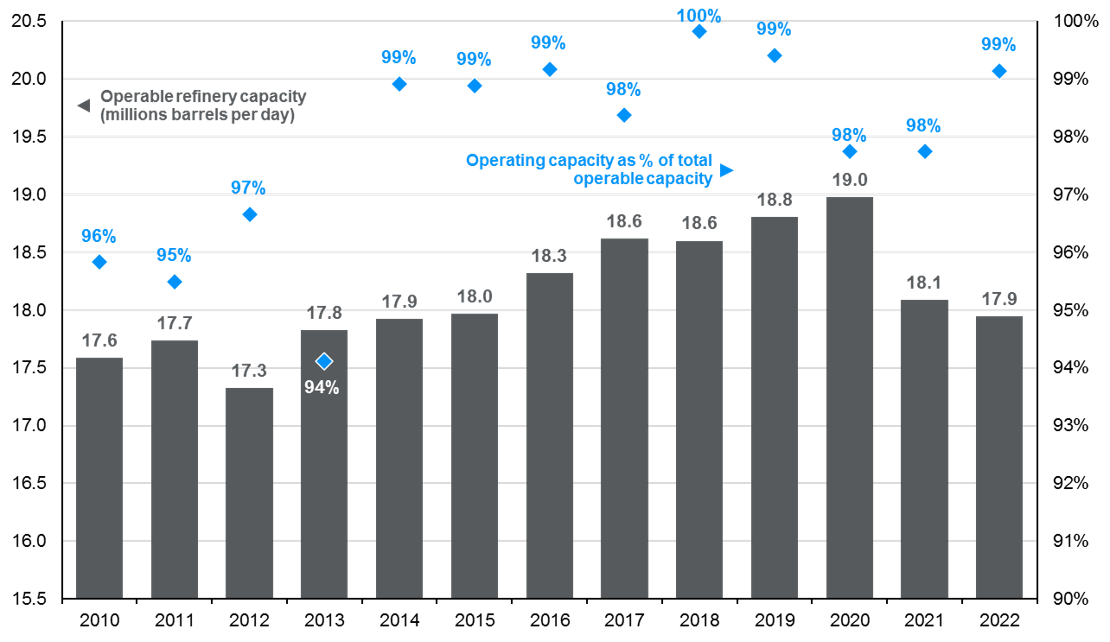 Similar to energy, materials and industrials are tracking strong earnings growth, as companies in both sectors pass along higher costs to consumers. Within industrial, we have begun seeing some pressure points of softer demand among the manufacturers and industrial service providers. In contrast, the airlines have been strong performers, with many reporting their first quarterly profit since the onset of the pandemic. Sales have been buoyed by robust demand, which more than offset the higher fuel costs and labor costs the airlines saw in the second quarter. Transportation also remains a strong performing industry, as higher freight costs and volumes boost revenues.

Financials are in line to see another quarter of an earnings contraction, primarily driven by a buildup in loan loss reserves amid higher inflation and fears of a recession. This profit decline was further exacerbated by a slowdown in mortgage revenue, a decline in mergers and acquisitions (M&A) activity and a drop-off in equity and fixed income underwriting. The decrease in earnings were partially offset by higher net interest income, better than expected trading revenue, solid card spending and healthy loan growth.

Turning to the growthier parts of the market, health care is leading the way with expected earnings growth of 6.8% y/y. The sector’s earnings remain strong, as it benefits from a mix of defensive and growth-oriented companies. Demand for COVID-19 testing, vaccines and treatments continue to drive revenues among the large manufacturers. Additionally, with the economy fully open now, we see upticks in utilization rates and elective procedures. Lastly, pharmaceutical and biotech companies have maintained strong pipelines for new products and drugs, further boosting sales.

Like health care, information technology is set to another quarter of earnings growth, with current estimates pointing to a 2.0% y/y increase in EPS. Strong demand for software and software services continue to support revenues, while the perpetual shortage in semiconductor chips has also provided hardware companies with pricing power. That being said, extended lead times have limited sales to a certain extent among some firms, but overall revenues are still tracking y/y growth of 8.1%. On the cost side, the tech sector has been the most active in combatting higher labor costs, with many of the large firms announcing layoffs and a pause in hiring towards the end of the second quarter.

Unlike its growth counterparts, the communications service sector looks set to struggle, with current projections indicating an earnings decline. Many management teams noted all-time highs in headcount, which along with strong wage growth, has put a dent in margins. Moreover, a stronger US dollar has proved to be a significant headwind, as 42% of the sector’s revenues are foreign sourced. On the bright side, while profits are down y/y, results have come in better than expected. Firms have reported ad revenues and subscriptions above Wall Street expectations, perhaps indicating things are as bad as they seem.

Much ink has been spilled about the risk of recession rising in the U.S. and around the world, but what does an economic accident mean for equities? Markets are forward looking, and have historically seen performance turn around before the economic data troughs.

We then calculated how long it has historically taken for a recession to begin after the S&P 500 hits a low. On average, it has taken 7 months. The current market low was on June 16, 2022, so according to this theory, the market is pricing a recession that starts in December 2022/January 2023. We then calculated the drawdown from the 12-month prior low to the recessionary period low. On average, the S&P 500 has declined an additional 14.4% from its 12-month low prior to the recession; although this is skewed by the Financial Crisis, it does suggest that there may be room for equities to move lower after a strong July.

The bottom line is that recession risks are rising and markets are in the process of pricing this in. At the same time, however, forward earnings estimates are still too high, leading some to believe that markets could see a significant decline as profit forecasts are revised lower. We would agree that current estimates are too high, and will need to come down in the coming weeks.

As earnings expectations decline, what will this mean for returns? 2022 has been characterized by a significant decline in valuations against a backdrop where earnings expectations have remain resilient. Will both earnings and multiples decline in 2023? That would very much be the exception to the rule. As shown in the chart below, only 8 of 111 past calendar years have we seen both forward price to earnings (P/E) ratios and earnings expectations simultaneously drag on annual returns. Furthermore, if the assessment above is correct, one could expect multiples to drive a relief rally as markets look to the other side of recession. 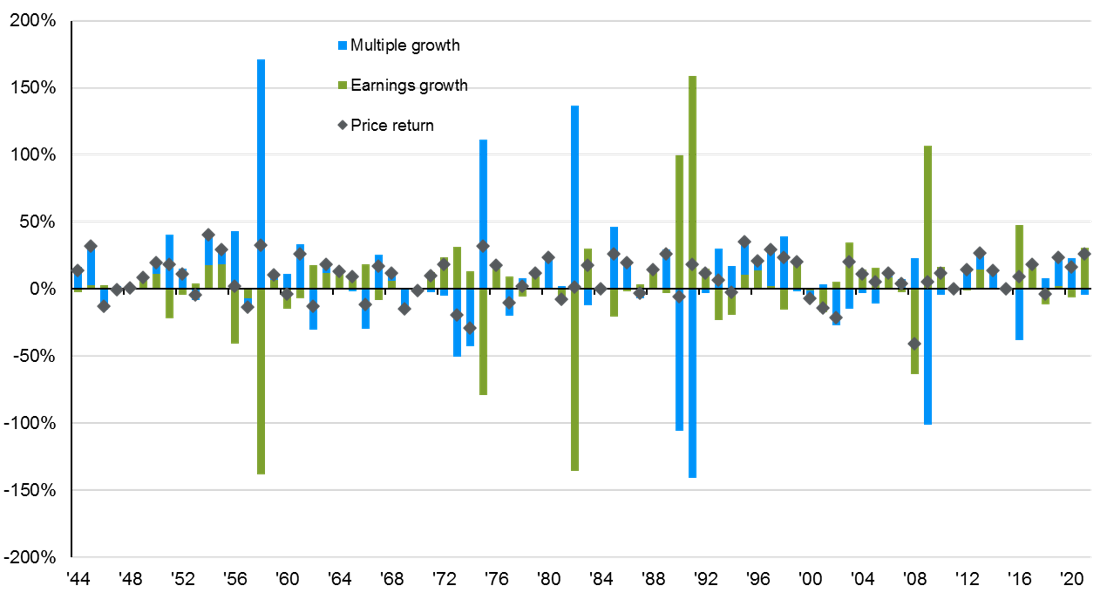 The past few weeks have seen members of the Democratic party in Washington attempt to pass legislation under the guise of controlling inflation. Embedded in this bill are a series of tax provisions which would have an immediate impact on 2023 profits if passed. While taxes on carried interest and companies focusing on capex look to be off the table, the bill will enforce a 1% tax on share buybacks in addition to a 15% minimum corporate tax rate. Together, we estimate that the 1% excise tax on share buybacks along with the revised 15% corporate minimum tax would subtract 3% from S&P 500 earnings growth in 2023, with the corporate minimum tax would account for 2.6 percentage points of the total 3% reduction.

Market cap is in USD billions

Source: FactSet, Strategas, J.P. Morgan Asset Management. All data are as of August 8, 2022.

Two negative quarters of growth do not technically represent a recession, but growth has clearly decelerated over the first half of this year. Part of this has to do with higher commodity prices, but part of it has to do with higher rates. The bottom line is that the economy is losing momentum, but the stock market seems to have priced at least some of this in.

With the Fed continuing to tighten, earnings are key. We prefer sectors with operating leverage – materials, energy, and consumer staples – but also structural growth stories like technology and healthcare, which are looking more attractively valued following the sell-off seen during the first half. Equity volatility looks set to persist as long as interest rate volatility remains elevated. Bringing down rate volatility will require more clarity on inflation and the Fed, but the coming weeks will begin to provide us with the information we need.

Will global central banks’ fight against inflation lead to a global recession?

Policymakers are tightening monetary policy aggressively, many at the expense of growth in their respective regions.