Protecting against inflation:
Part 2 - The labour market is key

In the second of this inflation mini-series we take a closer look at what is going on in the developed world’s labour markets. The supply chain problems discussed in part 1 may linger for some months but whether this turns into a lasting inflation problem depends on the jobs market. If workers are able to bargain for higher wages in the face of rising living costs then this has the potential to feed a wage-price spiral and medium-term inflationary pressure.

Such bargaining power was notably absent in the last cycle. For several years after the financial crisis, as unemployment declined, wage growth remained lackluster. It appeared that the inverse relationship between unemployment and wage growth was broken. It took a long-time and near record low levels of unemployment before wages started to pick up.

What’s so remarkable about the recent recovery in the labour market from the deep pandemic induced recession is the sheer speed at which we have returned to the point where workers again have bargaining power. From its peak of 10%, US unemployment took 8 years to fall to current levels after the financial crisis. From its pandemic peak of nearly 15%, US unemployment has recovered to 3.9% in less than 2 years.

The unemployment rate can be an imperfect measure of the tightness of the labour market but there are multiple signs that demand for labour is currently high relative to the available supply of workers. For a start, the gap between the number of Americans who think that jobs are plentiful and those who think they are hard to get is very close to the highest level on record. And they are taking advantage of the plentiful job opportunities and the fact that job switchers tend to get bigger pay increases than those who stay with their current employer. The number of people quitting their job is at record highs.

Businesses are also reporting a very tight labour market. The National Federation of Independent Business survey shows that the number of small businesses struggling to hire the workers they need is very high by historic standards and the number who have raised pay in the last 6 months and are planning future pay rises are both at record highs. Layoffs are also near record lows as companies cling on to workers in the knowledge of how hard it is to replace them.

Exhibit 1: US unemployed and job openings
Millions of people 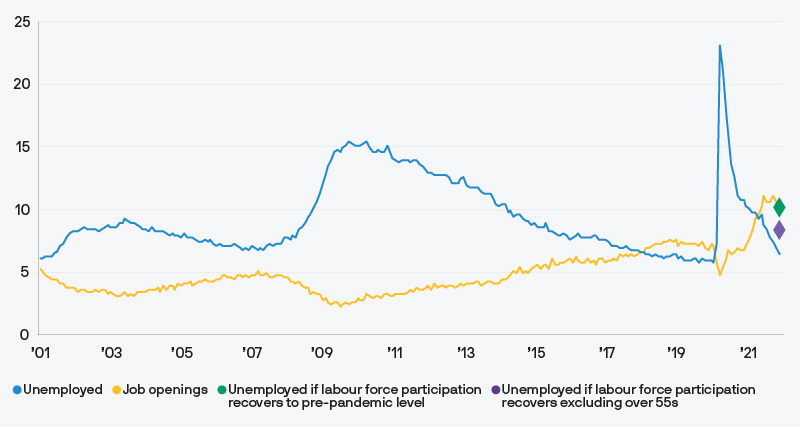 Source: BLS, JOLTS, J.P. Morgan Asset Management. Labour force participation recovery assumes the participation rate goes back to the level from February 2020 and that they are recorded as unemployed. Guide to the Markets - UK & Europe. Data as of 7 January 2022.

Since the start of the pandemic, the growth in the number of Americans not in the labour force (those who are not currently working and not looking for work) is primarily due to those over 55 years old. It is probably fair to assume that eventually most of the under 55s who were working pre-pandemic will return to work. However, there are good reasons to believe that many over 55s will have retired permanently.

Many would have naturally retired anyway over the last two years. But we suspect some others will have been able to retire earlier than they otherwise would have because of the enormous gains in the US stock market since the start of 2020. The S&P 500 ended 2021 47% higher than at the start of 2020. That will have boosted the value of pensions and other investments. House prices have also risen by 28% benefitting anyone who wants to withdraw equity from their house or downsize to help fund their retirement. Of the over 55s who have left the labour force, 95% say they don’t want a job.

The key point is that even if the participation rate does rise, the number of available workers is likely to remain low relative to the number of job vacancies.

Could Omicron reduce demand for workers? Our base case is that any economic disruption from Omicron is likely to be relatively short-lived given how quickly it spreads and the fact that the proportion of cases who are hospitalised seems to be lower compared with previous waves. The forthcoming anti-viral pills which reduce hospitalisation among the infected should also help limit the length of any significant economic disruption.

Now that businesses know how quickly demand can bounce back and the difficulty they are having hiring at the moment, we believe that if they believe any economic disruption is likely to be short-lived then they will be much less willing to let go of workers than they were at the start of the pandemic. So we expect that any reduction in labour market tightness due to Omicron is likely to only prove temporary.

It’s not just in the US that the labour market looks tight. In the UK, the furlough scheme has done a spectacular job of preserving employment. At one point in 2020 about a third of UK private sector workers were on furlough, yet with the furlough scheme now ended, unemployment is only very slightly higher than it was pre-pandemic. Various business surveys (Exhibits 2 and 3) also indicate a tight labour market. Immigration controls post-Brexit could also limit the ability of businesses to fill roles with European workers. 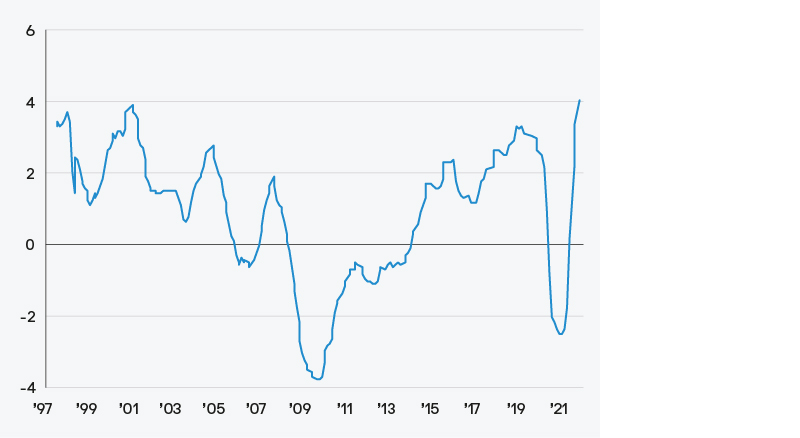 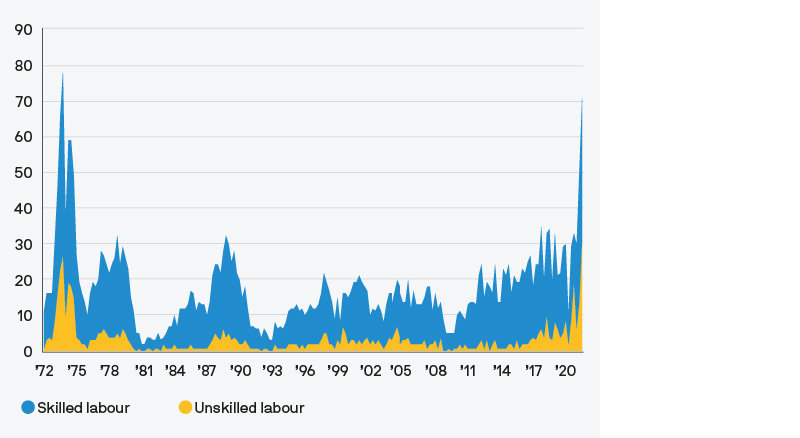 In Europe, there tends to be more inertia in wages because pay deals tend to be struck on a multi-year basis. We also have less granular and timely data to monitor the situation relative to the US and UK. However, the risks are clear: businesses are reporting difficulty hiring the workers they need (Exhibit 4).

And politicians, under pressure given rising living costs, appear to be supportive of higher wage growth. Indeed last November the European Parliament issued a draft directive on a minimum wage which aims to lay down minimum requirements to ensure an income that allows for a decent standard of living for workers and their families. This can either be via a statutory minimum wage or by allowing workers to negotiate their wages with their employers via collective bargaining. The new German government has already put forward a proposal for a 22% increase in the German minimum wage which would directly affect the salaries of roughly one fifth of the German workforce. 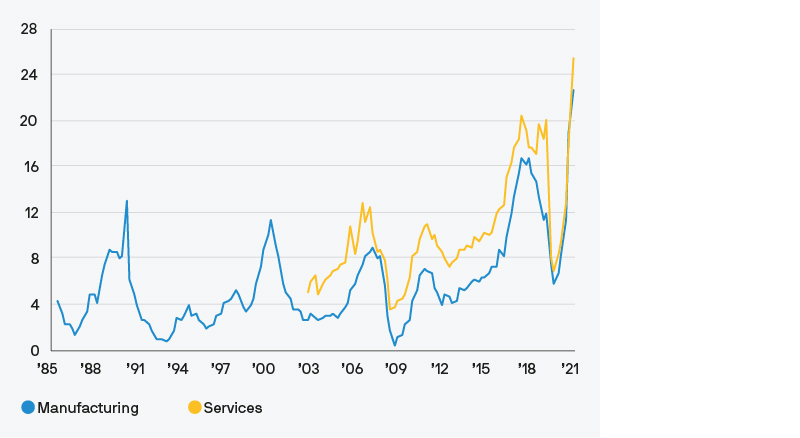 In summary, labour markets look remarkably tight only two years after the start of the pandemic, particularly in the US and UK. Tight labour markets could lead to higher and more sustained wage gains than were seen in the last cycle. Unless they are accompanied by better productivity gains, higher wage inflation will lead to core inflation staying above target on a more sustained basis than investors and central banks currently expect. In part 3 next week, we will consider the best options across the asset spectrum for investors to protect their capital.

Protecting against inflation: Part 1 - Storm in the ports

Inflation is standing at record levels across many markets. Explore our framework for tracking the impact of supply chain disruption on inflation in 2022.

Drawing on the depth and breadth of our market and economic expertise, we offer timely macro insights into today's big investment themes, to enable more confident portfolio decisions.