A number of recent events have coincided with the volatility seen in the UK’s bond and currency markets related to monetary and fiscal uncertainty:

This move was behind the Fed and ECB, despite evidence of stickier inflation and limited spare capacity in the UK economy.

A new government led by PM Truss took office and made a number of changes to senior civil service posts, including the dismissal of the Permanent Secretary to the Treasury.

UK households were set to see gas bills rise by another 80% in October, on top of the 54% increase seen in the spring. A substantial package of measures were announced, capping the energy price and providing a short-term subsidy to confront this.

This contained a reversal of the previous increase in national insurance contributions, reduction in the basic rate of income tax, abolition of the top rate of tax, and stamp duty cuts. No revenue raising measures or spending cuts were announced.

The OBR did not initially provide analysis of the impact of these measures on the debt outlook; however, the OBR has since pledged that an analysis will be provided on 11/23.

In our view, the combination of all these events amplified uncertainty in markets about the UK’s institutional architecture and the BoE’s and government’s commitment to sustainable monetary and fiscal policy.

The British Pound (GBP) has fallen 8% against the USD month-to-date, however this is against a backdrop of broad USD strength. Perhaps a more accurate characterization of GBP risk premia is to consider its 4% month-to-date fall vs. the EUR.

UK government bond (Gilt) yields have surged as markets digest the impact of the fiscal package on monetary policy. The new packages suggest that net borrowing this fiscal year will amount to ~£190bn. Although this is less than the £300bn in 2020/21, the backdrop for Gilt demand is very different. In 2020, the BoE was a net buyer of Gilts amounting to ~£270bn, whereas over the next 12 months, we the BoE will likely be a net seller of ~£80bn. The 10Y Gilt yield has risen from around 1% at the start of the year to above 4%. This increase has bled through to the U.S. bond market as well, contributing to the 10Y Treasury move up to near 4%.

The UK equity market (FTSE 100) has been relatively resilient as ~80% of earnings generated by FTSE 100 companies are from overseas and therefore become more valuable when the GBP falls.

All eyes now turn to the BoE which meets on 11/3. On 9/26, the BoE stated that “it will make a full assessment at its next scheduled meeting”, dampening market expectations for an interim policy announcement. However, on 9/28 , the BoE announced that it would step in and buy long-dated Gilts and postpone the start of its QT program to 10/31. This decision is “strictly time limited” and meant to restore “orderly market conditions”.

The BoE finds itself in a difficult position. The government has clearly stated its intent to boost the supply side of the economy; however, in the near-term it will merely add to demand at a time when the UK appears to be running at full capacity and persistently hot inflation. The decline in GBP will also feed imported and domestic inflation.

At the time of writing, the market expects the BoE will need to raise rates by a further 125 bps in November and another 75b bps in December, taking rates to 4.5% by year end. This will clearly have a dampening effect on economic activity, primarily through the housing market, but failure to act with sufficient force risks undermining its commitment to inflation.

Market expectations for Bank of England base rate 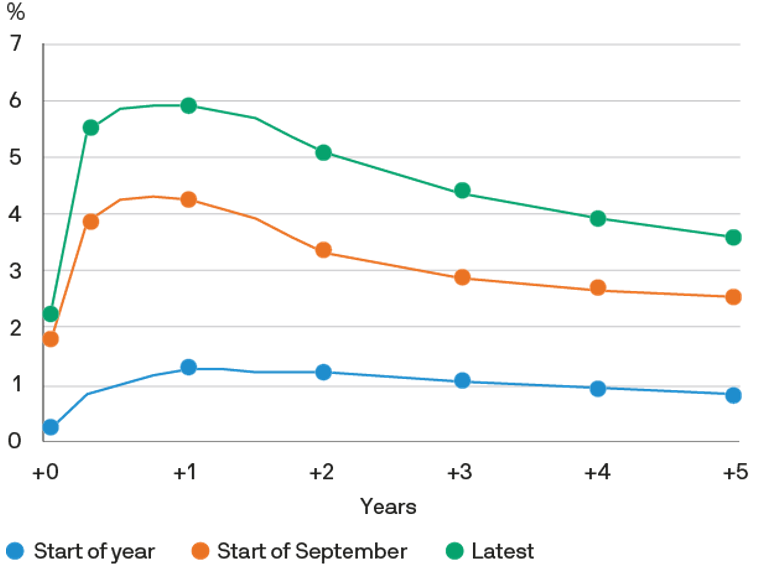 Source: Bloomberg, J.P. Morgan Asset Management. Expectations are calculated using 6-month OIS forwards. Past performance is not a reliable indicator of current and future results. Data as of 26 September 2022.

S&P and Moody’s rating reviews are due on 10/21 and downgrades are possible. Although markets often move ahead of ratings, sometimes changes can push a bond beyond a threshold forcing investors to sell for regulatory purposes. For example, downgrades to A+ would remove Gilts from the investible universe for some central bank type mandates, and foreign investors hold 30% of the Gilt market.

These are not easy times for UK policymakers as they face an uncomfortable balancing act of trying to support demand and maintain popularity, yet without stoking further inflation and losing credibility.

Words and actions will be heavily scrutinized as markets assess whether policymakers get this balance right. Our core judgment is that the market volatility will ensure that policymakers provide sufficient assurance about medium-term plans to anchor credibility, so that we have seen the worst of the volatility.