Could the Fed turn more hawkish on monetary policy?

A sooner than expected lift off in policy rates could create some short-term volatility in both bond and equity markets. Yet we argue that this would be less of a concern for equities if the economic and business fundamentals are strong.

Three weeks after the November Federal Open Market Committee (FOMC) meeting, where it announced that it will begin reducing the size of asset purchases by USD 15billion per month, more senior officials are now voicing the need to accelerate this tapering, and possibly bring forward the timing for the first policy rate increase to mid-2022. Meanwhile Federal Reserve (Fed) Chair Jay Powell has been nominated by President Biden for another four-year term.

The hawks are getting louder. St. Louis Fed President James Bullard, who will be an FOMC voting member in 2022, called for the bond purchases to end by March 2022. Governor Chris Waller also called for quantitative easing (QE) to end by April. Vice Chair Richard Clarida, who will step down after January and be replaced by Lael Brainard as Vice Chair, also stated that the pace of asset purchases should be open for discussion at the December 14-15 FOMC meeting. The current pace of tapering implies QE should end by June 2022. For this to be pushed forward to March or April would imply that net purchases by the Fed from December onwards would be reduced by approximately USD 150billion to USD 210billion. This is a very modest difference given the Fed is currently holding more than USD 8trillion of U.S. government bonds and mortgage-backed securities, even if the FOMC decides to accelerate its QE tapering.

The signal behind this shift would be much more important, reflecting that the Fed is taking the inflation challenge more seriously. An earlier end to asset purchases in theory could open the door for an earlier-than-expected policy rate lift-off in a market that is already pricing in a first rate hike around the middle of next year. The September update of the FOMC’s summary of economic projection shows that 9 out of 18 participants forecast at least one rate hike before the end of 2022. The December update could show more participants leaning towards an early, and more aggressive rate hike in 2022.

The 6.2% October Consumer Price Index inflation print was not the only factor that may have convinced more Fed officials to act sooner rather than later. The job market continues to run hot with October unemployment rate falling to 4.3% in September. The difference between job openings and the number of unemployed remains high as businesses struggle to fill vacancy. Even though labor participation rate is still low, at 61.8% in October versus averaging 63% in 2019, the Fed is probably worried about wage-price spiral getting out of hand. 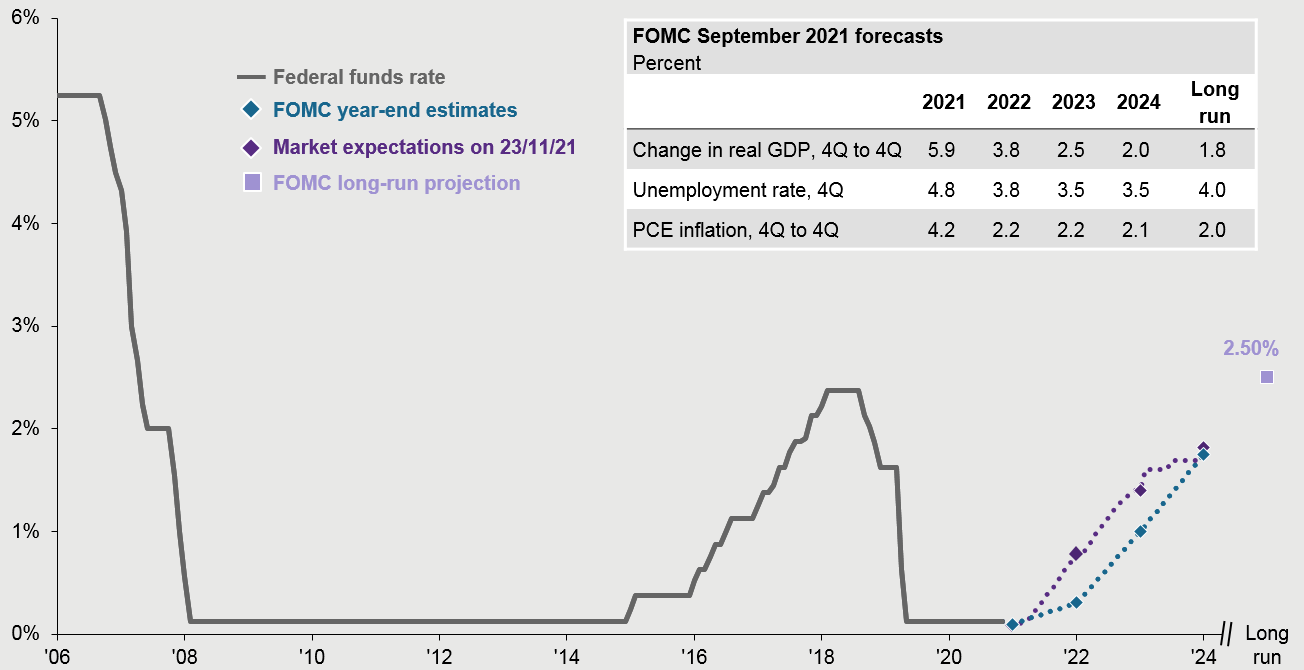 It is also worth noting that the Fed’s leadership could be reshaped in the next year. The seven-person Board still has one vacant seat; Randal Quarles, Vice Chair of Supervision, has submitted his resignation effective December; and Richard Clarida’s term, as mentioned above, will expire in January, leaving three vacant seats on the Board. The President has already announced he would look to fill these seats in early December. This could replenish some dovishness to the committee.

Given recent economic data and comments from senior Fed officials, there has been a significant adjustment to the path of policy rate increase between now and the end of 2022. The futures market and overnight index swap market both indicate that the first policy rate hike could come as soon as July and there could be two 25bps hikes in 2022. The short end of the U.S. Treasury (UST) yield curve has also risen to reflect the prospects of policy tightening. Since the long end of the yield curve remains anchored (10-year U.S. Treasury yield failed to break above 1.65% in the past month), the curve has flattened.

The current growth momentum and inflation trend in the U.S. argue for the Fed to be more aggressive in returning to a neutral stance. However, as we have seen in the past two years, COVID-19 could disrupt the recovery progress. Europe is now experiencing a fresh wave of outbreak and some countries have imposed strict lockdowns again. While the U.S. is unlikely to follow Europe’s footsteps in lock down policy, states with relatively low vaccination rates could run the risk of outbreak and this would nonetheless impact consumer sentiment and demand for services.

A sooner than expected lift off in policy rates could create some short-term volatility in both bond and equity markets. Yet we argue that this would be less of a concern for equities if the economic and business fundamentals are strong. Earnings per share for S&P 500 is forecast to expand by 9% in 2022, according to analysts’ consensus. This would be in line with the pre-pandemic average. Higher rates may impact on sectors with more expensive valuations, but the cyclically sensitive sectors, such as consumer services, financials and industrials, should be more resilient.

Even if the Fed does start policy rate lift off in the summer of 2022 and hike 3-4 times per year, the real policy rate is still likely to stay in negative territory for an extended period. This implies cash return should also stay negative relative to inflation and hence, Asian investors will still need to look for ways to generate income by investing in high dividend equities, high yield fixed income (high yield corporate debt and emerging market bonds) and alternative assets such as real estate and infrastructure.