Over the next 10 to 15 years, we see global growth averaging 2.3%, down 20 basis points (bps) from our 2019 assumptions. Our forecast for developed markets remained unchanged at 1.5%, but for emerging markets, we trimmed our forecast 35bps to 3.9%.

Our 10- to 15-year projections for global growth3 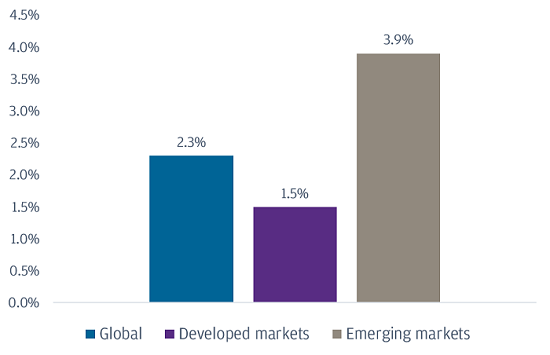 In our view, population aging is a key headwind to global growth while a technology-driven boost to productivity may help growth. Inflation is also set to fall short of most central bank targets, unless and until fiscal stimulus features more prominently in the policy toolkit.

With modest economic growth, years of monetary easing and low inflation, this has resulted in an ultra-low rate investing environment. Thus, it may be time to have a rethink of the roles different assets could play in a long-term portfolio.

In long-term investment portfolios, quality government bonds have been generally considered a type of safe haven assets where they are seen as diversifiers1 against risk assets such as equities.

Generally, such assets could maintain or increase in value through market cycles and could be readily converted to cash. They also tend to have a lower or negative correlation to the general market and could help stabilise portfolios during times of stress.

Investors generally sacrifice potentially higher expected returns from risk assets in return for such stability. But this is changing as years of monetary easing and low inflation have left yields at zero or less for some developed markets such as Germany and Japan.

To better navigate what has become a more challenging investing environment, diversifying1 across the fixed income spectrum could help add resilience to portfolios. Credit2, for example, could potentially be considered to help enhance portfolio returns for the long term, depending on investors’ objectives and risk appetite.

Outside of fixed income, currencies like the US dollar, Japanese yen and Swiss franc, and alternative assets such as core real estate and infrastructure, could be some other lower risk options for a portfolio2.

Separately, equities could continue to play a major role in long-term portfolios with modestly improved valuations in both developed and emerging markets. The return of capital to shareholders in the form of dividends and buybacks continues to be a crucial component.

Generally, no single asset class can stand out as an all-time outperformer. As winners rotate, it is crucial to have a diversified1 portfolio so that you won’t miss out on the opportunities to capture the upside potential of different asset classes. Keeping a view over the full cycle is always important, but disciplined execution of an investment strategy is also a clear competitive advantage.

1. Diversification does not guarantee investment return and does not eliminate the risk of loss.
2. For illustrative purposes only based on current market conditions, subject to change from time to time. Not all investments are suitable for all investors. Exact allocation of portfolio depends on each individual’s circumstance and market conditions.
3. Source: J.P. Morgan Asset Management; estimates as of 30.09.2019. Emerging markets aggregate derived from a nine-country sample.
4. Source:  FactSet, U.S. Federal Reserve, J.P. Morgan Asset Management; Tullett Prebon Information. Data begins, and averages calculated from 01.01.1970 for US Treasuries, 02.10.1972 for German Bunds and 03.02.1986 for Japanese Government Bonds. Yield is not guaranteed. Positive yield does not imply positive return. Past performance is not a reliable indicator of current and future results. Data reflect most recently available as of 31.12.2019.


Investment involves risk. Not all investments are suitable for all investors. Investors should consult professional advice before investing. Investments are not similar to or comparable with fixed deposits. It does not constitute investment advice and it should not be treated as an offer to sell or a solicitation of an offer to buy any fund, security, investment product or service. The information contained herein does not constitute J.P. Morgan research and should not be treated as such. The material was prepared without regard to specific objectives, financial situation or needs of any particular receiver. The opinions and views expressed here are as of the date of this publication, which are subject to change. This advertisement or publication has not been reviewed by the Monetary Authority of Singapore. Issued by JPMorgan Asset Management (Singapore) Limited (Co. Reg. No. 197601586K). All rights reserved.

Seeking out opportunities in Asia amid growing wealth, consumption and savviness.

Why do we have faith in the growth opportunities in China’s technology and consumer sectors.

We explore the bond themes and opportunities 2Q 2021 as inflation picks up.

In most cases investors do not focus on just one asset class to achieve their investment goals. Find out why.

What’s in store for bonds in 1Q 2021 as economies reopen?

How bonds could fare as the global economy recovers

Employing a macro, focused and flexible investing approach amid a changing landscape.

An update of our income strategy on how we are navigating current volatile markets, and staying invested.

Seeking a diversified portfolio with a long-term horizon could help investors ride through volatile markets.

DRIVE INCOME WITH FLEXIBILITY Which is why we invest opportunistically across multiple sources to help you light up the income potential in changing markets.

Sustainable investing is a forward-looking approach that aims to deliver long-term sustainable financial return in a fast-changing world.

Insights and products to help you cut through the noise and keep your portfolio on track.

For Fund or Institutional enquiries, please call or email us. You can also contact your financial advisor or your J.P.Morgan Representative.