What do the As and Bs in bond credit ratings mean for investors?

In the bond universe, credit rating agencies are likened to medical professionals. They conduct checks to determine the health of bond issuers, and then release results of their findings, or ‘health reports’ on the issuers’ credit status. The world’s three biggest credit rating agencies, namely Moody’s Investors Service (Moody’s), S&P Global Ratings (S&P) and Fitch Ratings (Fitch), provide the majority of such services. 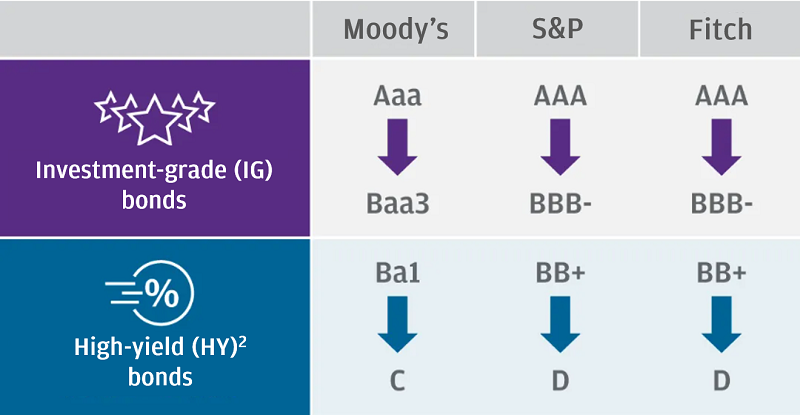 IG bonds are those that are given a credit rating of Baa3/BBB- or above by rating agencies. Among IG bonds, those with AAA or Aaa rating are exposed with the lowest credit risk. Meanwhile, bonds rated below Baa3/BBB- are regarded as HY2 bonds.

IG bonds rated BBB- generally receive the most attention. As such bonds are at the lowest notch within the IG space, once issuers encounter any business difficulties or special events, their credit risk could rise and that would have an impact on the credit status. They may then be downgraded to non-IG bonds, or HY2 bonds, and become so-called “fallen angels”.

In the first quarter of 2020, the global public health crisis and the oil price collapse made a significant impact on the HY2 bond market. S&P data shows that 403 “fallen angels” were newly categorised as such this year, and more than 1203 were deemed as potential “fallen angels”, as of 31 July.

HY2 bonds are also commonly known as junk bonds, or non-IG bonds. These are bonds with credit ratings below Baa3/BBB-.

Other than a “fallen angel”, a “rising star” is another common reference in the European and US HY2 bond markets. “Rising stars” had originated in the US bond market in the 1980s. At that time, a number of start-up companies in new industries had issued HY2 bonds to raise funds, and they eventually became industry leaders. This is why “rising stars” are generally referred to as HY2 corporate bonds that could potentially be upgraded to IG as their credit quality improves.

As interest rates could stay low for longer, HY2 bonds would likely remain on the radar of investors seeking yield1.

Still, the credit status of HY2 bond issuers could vary, and the extent of default risk is also difficult to be accurately estimated. As such, robust research analysis of bond issuers is key to HY2 bond investing.

Light up your Income potential

Diversify your portfolio with Growth Strategies

Market volatility and lower yields are here to stay. Investors, based on their investment objectives and risk appetite, could tap credit ratings as a guide as they diversify4 across different income sources for potential yield1 opportunities, and to help manage portfolio risk5.

Provided for information only based on market conditions as of date of publication, not to be construed as investment recommendation or advice. Forecasts/ estimates may or may not come to pass.

This advertisement or publication has not been reviewed by the Monetary Authority of Singapore. It does not constitute investment advice, or an offer to sell, or a solicitation of an offer to buy any security, investment product or service. Informational sources are considered reliable but you should conduct your own verification of information contained herein. Investments involve risks. Investments are not similar or comparable to deposits. Past performance is not indicative of current or future performance and investors may not get back the full or any part of the amount invested. Dividend distributions if any are not guaranteed and are made at the manager’s discretion. Fund’s net asset value may likely have high volatility due to its investment policies or portfolio management techniques. The value of the units in the scheme and the income accruing to the units, if any, may fall or rise. Funds which are invested in emerging markets, smaller companies and financial derivative instruments may also involve higher risks and are usually more sensitive to price movements. Any applicable currency hedging process may not give a precise hedge and there is no guarantee that any hedging will be successful. Investors in a currency hedged fund or share class may have exposure to currencies other than the currency of their fund or share class. Investors should make their own investigation or evaluation or seek independent advice prior to making any investment. Please refer to the Singapore Offering Documents (including the risk factors set out therein) and the relevant Product Highlights Sheet for details at https://am.jpmorgan.com/sg/en/asset-management/per/. To the extent permitted by applicable law, we may record telephone calls and monitor electronic communications to comply with our legal and regulatory obligations and internal policies. Personal data will be collected, stored and processed by J.P. Morgan Asset Management in accordance with https://am.jpmorgan.com/sg/en/asset-management/per/privacy-statement/. Issued by JPMorgan Asset Management (Singapore) Limited (Co. Reg. No. 197601586K). All rights reserved.

Seeking out opportunities in Asia amid growing wealth, consumption and savviness.

Why do we have faith in the growth opportunities in China’s technology and consumer sectors.

We explore the bond themes and opportunities 2Q 2021 as inflation picks up.

In most cases investors do not focus on just one asset class to achieve their investment goals. Find out why.

What’s in store for bonds in 1Q 2021 as economies reopen?

How bonds could fare as the global economy recovers

Employing a macro, focused and flexible investing approach amid a changing landscape.

An update of our income strategy on how we are navigating current volatile markets, and staying invested.

Seeking a diversified portfolio with a long-term horizon could help investors ride through volatile markets.

For Fund or Institutional enquiries, please call or email us. You can also contact your financial advisor or your J.P.Morgan Representative.