Will the Fed’s shock and awe work?

The U.S. Federal Reserve (Fed) opted for another surprise rate cut this morning (March 16, Asia time), instead of waiting for the March 17-18 Federal Open Market Committee meeting. A number of measures were announced.

Most of these measures are aimed at ensuring sufficient liquidity to the economy and financial systems, both domestically in the U.S. via repurchase operations and the discount window, and globally via the U.S. dollar swap lines. Financial conditions have tightened as spreads in credit markets have risen and pockets of illiquidity have been present in normally liquid fixed income sectors. The above measures are designed to massage the flow of cheap money into the economy and protect against a repeat seizure of financial markets experienced in 2008 that stemmed from rising counterparty risk in the financial sector.

The Fed is aware that monetary policy alone is probably not sufficient to offset the expected near term economic damage from social distancing and reduction in corporate spending. Fiscal policy and credible government measures to contain the outbreak are critical in limiting the humanitarian impact on the number infected and income reduction on the lower income group. That said, it is encouraging that the Fed is thinking ahead and taking a pre-emptive stance to mitigate financial stress from the pandemic’s economic fallout. At this point, we still believe that the resistance towards adopting a negative interest rate policy is high. 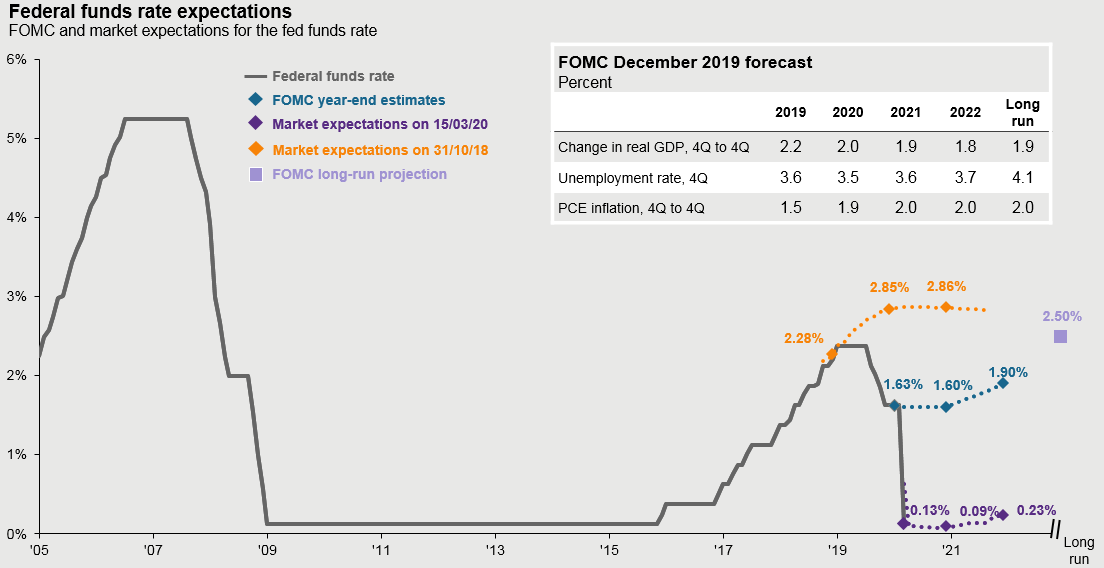 It is important to recognize that the Fed’s latest move is more to do with maintaining financial system stability by providing ample liquidity, even if its direct contribution to growth stimulus should be limited in the near term.

The immediate reaction from futures was negative. S&P500 futures were down 4.8%. Admittedly, market liquidity would be thin on a Monday morning during the Asian time zone, exacerbating market volatility. The timing of the announcement may also have shocked the market, given that we are only another three days away from a scheduled meeting. Moreover, the Fed has unleashed an aggressive combination of policy stimulus since the first surprise rate cut on March 3. However, with the Fed’s aggressive easing campaign, it begs the question of what more can the Fed do to support the economy in the future.

We are likely to see another volatile week in markets as investors continue to evaluate policy response and infections continue to rise in the U.S. and Europe. A sharp contraction in 2Q growth seems inevitable at this point and the next question would be the duration of this downturn in the U.S. Despite improvements in China and Asia, short term Asian market sentiment is likely to be driven by the U.S. The U.S. Dollar Index has also risen back to 98 and this would assert some pressure on emerging markets and Asia assets in the near term. The door to Asian and emerging market central banks to cut rates further has opened wider considerably in the weeks ahead. Some central banks may even choose to cut rates outside of their scheduled meetings to provide further support to their domestic economies.

Overall, our recommendation for investors to maintain a defensive position in the near term remains unchanged given the prospects of a sharp slowdown in the U.S. economy in 2Q, and possibly longer if government response to contain the outbreak is inadequate.