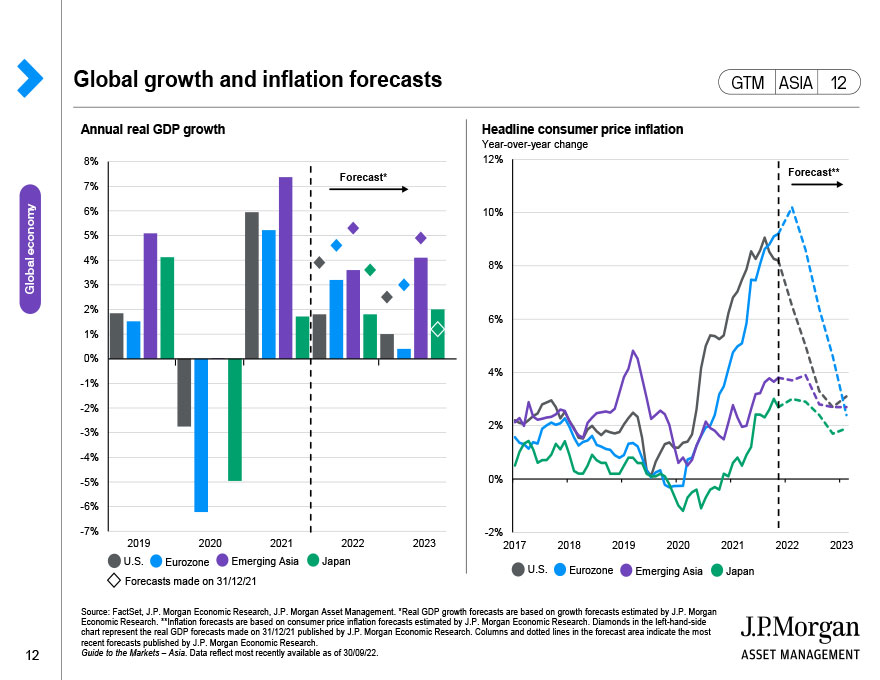 On the left, the chart shows the real GDP growth for key economies. The timeframe focuses on the path to recovery from the COVID-19 pandemic for these regions using forecasts from J.P. Morgan Economic Research. China has made an early start to this recovery in 2020 but it has since decelerated due to policy normalization and cooling property market. The U.S. is in the middle of a strong recovery now, helped by the aggressive fiscal stimulus. The eurozone was on a path of recovery until the Russia-Ukraine conflict threatened weaker growth and higher inflation in the region.

On the right, the chart shows the year-over-year headline consumer price inflation and forecasts. Inflation has picked up sharply since 2021, particularly in the U.S. and eurozone, fueled by commodity prices as well as economic re-opening dynamics. Inflation is expected to remain elevated in Europe for a short while given the still ongoing energy shortage before starting to slow down in 1Q 2023. U.S. inflation has started to show signs of slowing, and is expected to gradually move closer to its 2% target in coming quarters. In Asia, inflation is rising but to less extreme levels given slower wage growth and diluted exposure to Russia-Ukraine conflict. Given the more delayed economic re-opening in Asia, inflation is expected to tail-off in 2Q 2023, slightly later compared to the U.S. and Europe.