This signals a shift of policy priorities back to economic growth, suggesting that Chinese leadership may become more patient with the pace of long-term structural reforms.

Strong messages for accommodative policies were delivered at the Central Economic Work Conference (CEWC) held in Beijing during December 8 to 10. Top Chinese policy makers expressed concerns about downside risks to the economy and emphasized the policy objective of maintaining economic stability in 2022. This conference was the earliest one in the recent decade, reflecting the urgency to stabilize market expectation before the 20th Party Congress in 4Q 2022.

The CEWC highlighted that China’s economy faces “triple pressures of contracting demand, supply shocks and weakening expectations.” Stability in six areas, including employment, financial, trade, FDI, investment and expectations, were re-emphasized. This signals a shift of policy priorities back to economic growth, suggesting that Chinese leadership may become more patient with the pace of long-term structural reforms.

In response to those downside risks, the CEWC also set the tone for a combination of prudent monetary policy and active fiscal policy for 2022. This means that counter-cyclical policies, which have been reintroduced since the third quarter of 2021, might continue at a larger scale next year.

On monetary policy, the People’s Bank of China (PBOC) should show more easing bias in its operations, while staying cautious on the aggregate level of leverage in the economy. In early December, following the 50bps broad-based cut to the reserve requirement ratio (RRR), the PBOC lowered the re-lending rate by 25bps to support agricultural and small enterprises. In 2022, there may be more cuts to RRR and short-term loan prime rate (LPR), to reduce the lending costs and support bank lending to the small and medium-sized enterprises.

That said, enterprises’ business expectation may play a more important role as an investment driver than credit condition. More consistent macro policies and effective market communications could improve business confidence. Following a series of regulatory reform this year, it would take time for businesses to feel upbeat. Fiscal support is therefore essential to stimulate investment growth in the near term.

Tax breaks and fee cuts for businesses, as well as infrastructure investment, are proposed as the key tools to boosting domestic demand. Meanwhile, public housing might become another principal investment driver when the government sticks to the principle “housing is for living, not speculation.” Based on the accelerated issuance of local government bonds in the second half of this year, government-led investment may rebound in the next couple of quarters. 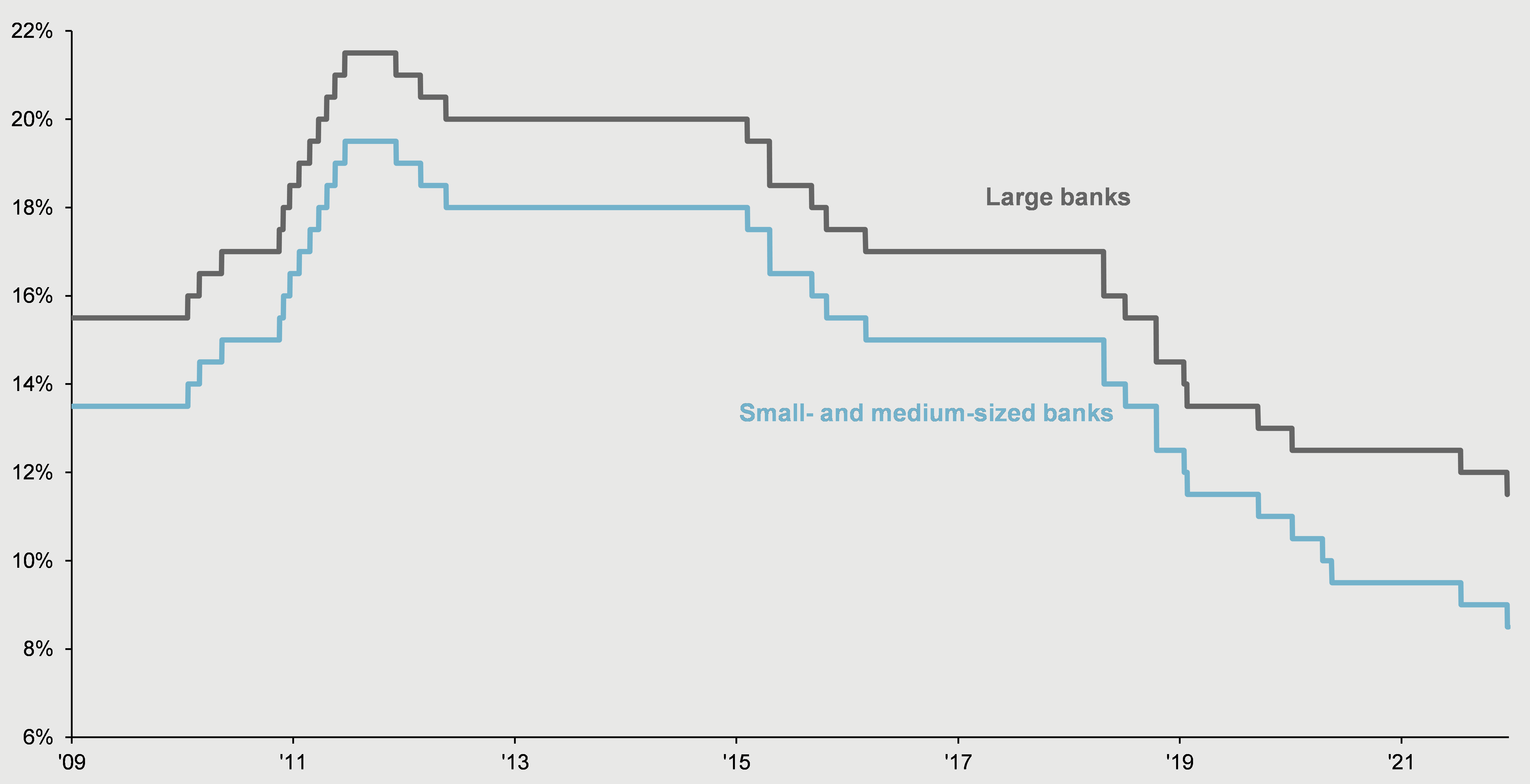 Large banks are the six major banks in China, including Industrial and Commercial Bank of China, Agricultural Bank of China, Bank of China, China Construction Bank, Bank of Communications, Postal Savings Bank of China. The other banks are categorized as small- and medium-sized banks. PBOC sets favorable reserve requirement ratio for banks that have met specific criterias, such as loans to small and medium-sized enterprises and agricultural sectors. These measures have significantly brought down the actual RRR for banks. According to the PBoC, after the previous RRR cut on July 15, 2021, the realized weighted average RRR is 8.4%.

In addition to the short-term policies, emphasis was also put on long-term policy initiatives at the CEWC. Common prosperity continues to be the ultimate objective for economic development, and public services in education, healthcare, senior care and housing are key areas for social development policies. It was stated that reform and economic restructuring should follow a steady and systematic approach, which suggests structural reforms should continue with a higher degree of patience.

The shift to accommodative policies should help to stabilize economic growth momentum in 1H 2022. At the National People’s Congress in March 2022, it is expected that a growth target of 5-6% real GDP growth for 2022 will be set. This might boost sentiment and support valuations in the stock market. Cyclical sectors might outperform in the near term, when output prices keep rising.

That said, investors should also bear in mind that the long-term reform objectives, such as common prosperity, deleveraging and decarbonization remain on the table and will continue to affect the investment landscape in China. Therefore, it is essential to be selective in the Chinese market and remain invested in themes with long-term potentials, such as technology self-sufficiency, renewable energy and consumption.