Is it Europe’s time to shine?

A wave of optimism has washed over global equity markets in the last few weeks as investors cling to supportive policies and easing of lock down measures around the world as fears of the COVID-19 spread abate. Investors seem happy to ride this wave as it takes them towards more cyclical regions, such as Europe and emerging markets, and relatively less demanding valuations than the U.S.

The benchmark U.S. Standard & Poor’s (S&P) 500 equity index has returned to positive territory for the year. Given the relatively defensive nature of U.S. large cap stocks and the rally in the technology sector, it is perhaps not surprising that the U.S. is leading many other developed equity markets. Contrast this to the Euro area where policy support has been as aggressive but the MSCI European Economic and Monetary Union (EMU) index is still 8% below where it started the year.

The sectoral composition differences between the U.S. and European markets are well known. The 11.8% technology weight in the MSCI EMU index is less than half of the 25.7% allocation in the S&P 500. Meanwhile, more cyclical sectors such as financials, industrials, and consumer discretionary, weigh in at 43.7% in the Euro area compared to 30.2% for the U.S. The performance of the technology sector in the U.S has helped to lift returns but also valuations. The U.S. market historically trades at a premium to Europe. U.S. market current valuations are looking elevated at a forward price-to-earnings ratio of 22.6x. But neither is the MSCI EMU index looking especially ‘cheap’ trading at a multiple of 19.1x, although it is still relatively better value than the U.S.

In the broadest sense, the European equity market is more cyclical than the U.S. and has trailed the U.S. as perhaps investors require more evidence of an economic recovery to lift conviction in the region. Given the lagging performance and shift in investor sentiment, should the expected improved economic outlook materialize, this will solidify the rotation into higher beta markets, such as Europe. Furthermore, the more decisive approach to fiscal and monetary policy support by European officials in this crisis is a positive development compared to prior recessions.

The European Central Bank’s (ECB) latest action was to increase its Pandemic Emergency Purchase Program by EUR 600billion (bn), bringing the total for this one support mechanism to EUR 1.35trillion, which will run until at least June 2021. This fresh wave of stimulus is linked to the inflation outlook, which by the ECB’s own view will be below target for some time, implying that bond purchases will be around for some time as well. The support measures reflect the severity of the downturn and the latest staff projections from the ECB show an economic contraction of 8.7% in 2020 and only a slow recovery out to 2022.

European leaders have even managed to come to some agreement over a potential EUR 750bn European Recovery Fund. The more indebted Southern European economies are likely to disproportionately benefit from such a fund aiding their economic recovery. While it may take some time for the final details to be agreed and funds to be dispersed, this is not an insignificant step towards greater fiscal integration. However, given that the hope of a Eurobond was short-lived, this one step will not be enough to quell the lingering uncertainties about the European project and a broader fiscal union. 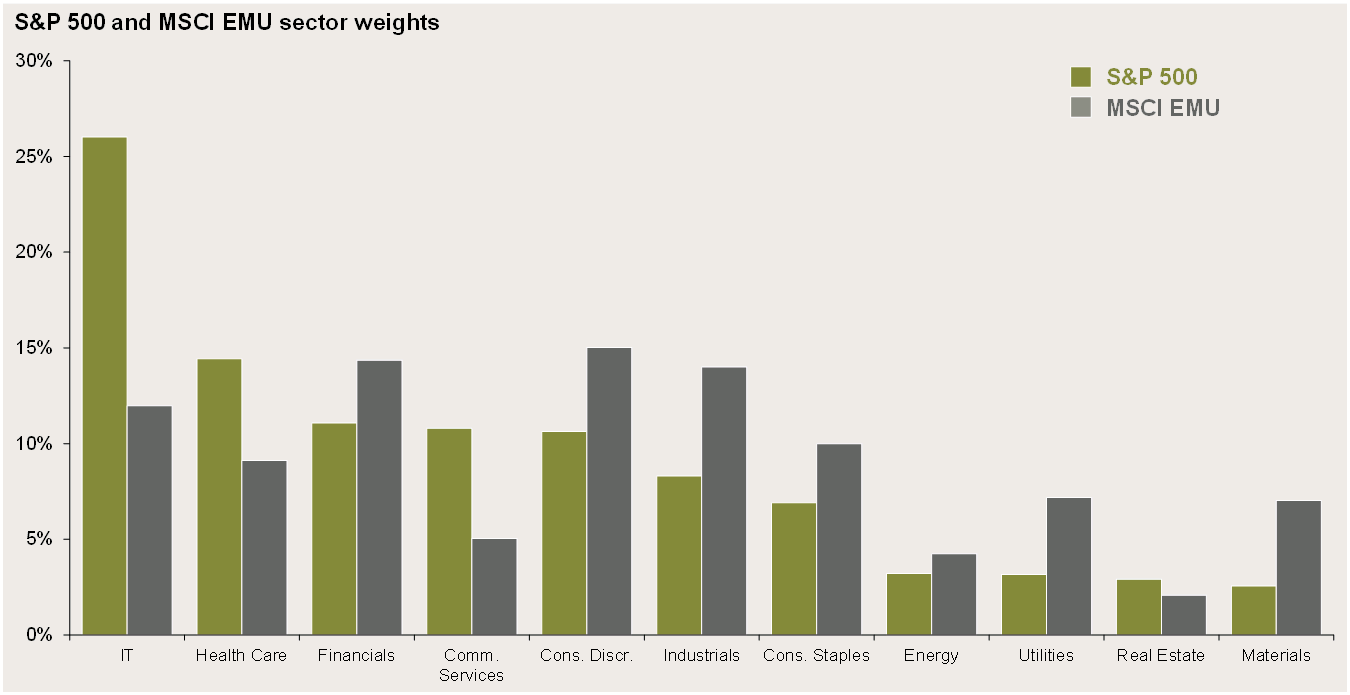 The more cyclical nature of the European equity market when combined with still strong policy support, economic activity indicators improving off of April’s lows, and a more favorable relative valuation position to U.S. equities could all add fuel to the rotation towards Europe. The more co-ordinated fiscal and monetary policy action is another supportive feature for the market.

Should risk appetite continue to improve and leave the U.S. dollar and other safe havens, the Euro may appreciate further, suggesting that domestically focused companies may fair better than those reliant on foreign trade for revenue growth.

However, much like the U.S. and elsewhere, the staggered re-opening of European economies will be reflected in the staggered performance of sectors and specific industries such as travel and tourism. Furthermore, the rotation towards cyclical markets or even cyclical sectors will only persist as long as the economic outlook continues to live up to market expectations, and is not surpassed by political or pandemic concerns once again. While seeking more attractive market positions outside of the U.S. is viable based on the improving economic backdrop, Investors need to remain cautious about riding a wave that ends up being a washout.