Government bonds:
Getting back to benchmark

Government bond yields have moved significantly higher over the last couple of years. So is now the time to consider moving closer to neutral on duration? We believe it probably is.

The bond market is already pricing in significant further tightening in monetary policy by major central banks. The Fed and the BoE are expected to lift rates to around 3.5% and 3%, respectively, by year end, while markets are pricing the European Central Bank’s policy rate to be approaching 2.5% by the end of next year.

The scope for interest rates to rise beyond these levels rests largely on the ability of households to withstand higher mortgage rates. In the US, 95% of mortgages are now fixed and about 80% are fixed for 30 years, with the other 15% fixed for at least 15 years. So as interest rates rise, the vast majority of homeowners in America won’t even notice. This is in contrast to 2007, when about 20% of US mortgages were adjustable rate.

In the UK, there has also been a shift towards fixed-rate mortgages (Exhibit 9). In 2007, 50% of UK mortgages were trackers, whereas today that’s down to about 20%. However, the period for which UK households are fixed is much shorter than in the US. About half of all UK mortgages are either on a tracker or 2-year fixed rate. Therefore, within a couple of years, any increases in interest rates from the BoE will have fed through to about half of all UK mortgage holders. So for those who don’t plan on moving home, UK households are more exposed to rising rates than those in the US.

Exhibit 9: Mortgages in the UK are shifting from floating rate to fixed rate
UK mortgages 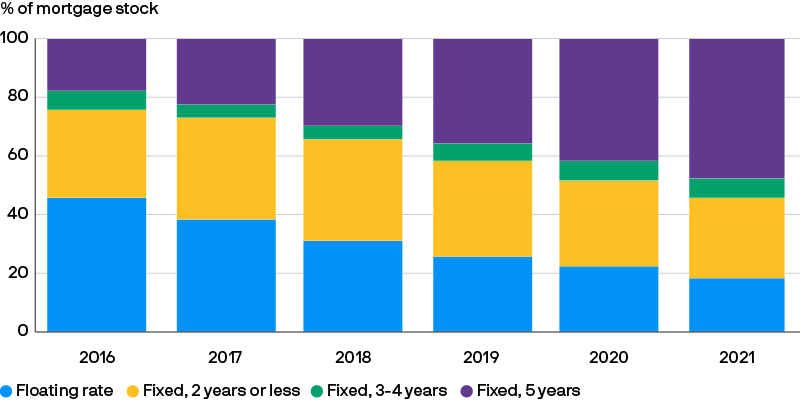 The other factor to consider though is the affordability of housing for people who do want to move home or buy their first home. Since the pandemic, house prices have risen significantly, up by about 40% in the US and 25% in the UK. That has been driven by demand for more space because of the shift to hybrid/home working, a lack of available housing supply and lower interest rates during the pandemic. Now that interest rates are rising again, housing is becoming less affordable (Exhibit 10).

The 30-year mortgage rate in the US has risen from below 3% to close to 6% in the last couple of years. Combined with the large increase in house prices, that means that the share of average income required to buy the average house today has already risen materially. In the UK the cost of a 2-year fixed-rate mortgage has increased from 1.2% in September to over 2.5% for a buyer with a 75% loan-to-value ratio.

It is therefore reasonable to believe that interest rates may not be able to rise much further than is already being priced in to US and UK government bonds before the housing market would come under pressure. 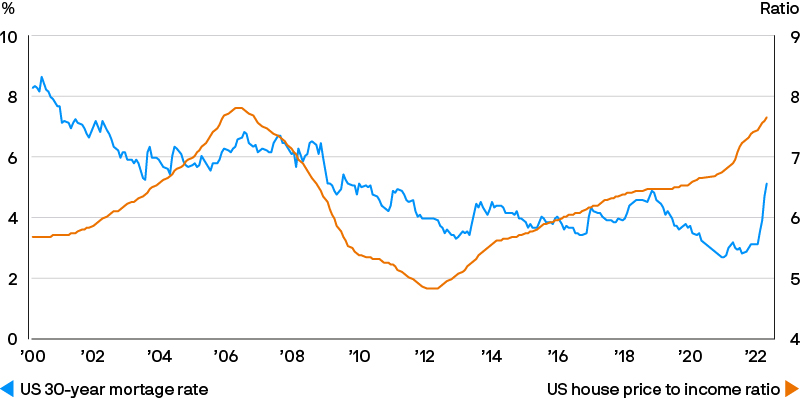 However, there are some counter arguments to the idea that government bond yields won’t rise much further from here. First is that we have entered a much more uncertain economic period, where the range of realistic potential outcomes for both growth and inflation is wider than in most of the last decade. For example, if wage growth stays strong then households may be able to afford higher mortgage costs. Bond investors may demand a higher yield to compensate them for the potential that we have shifted into a new inflation regime, where inflation and interest rates could potentially be sustained at higher levels than over the last decade.

Second, without quantitative easing and with the commencement of its gradual reversal, demand for government bonds could be substantially lower, putting further upward pressure on yields.

Third, even if one thinks bond yields won’t rise much further, absent a recession, the real return on bonds could still be negative unless inflation falls back to target quickly.

Weighing up these arguments, we believe that government bonds are less unattractive than they were when yields were much lower. While investors could still lose money in government bonds, particularly in real terms, the potential upside is now probably more evenly balanced with the potential further downside from here. Additionally, they offer some portfolio diversification in the more extreme negative scenarios, so long as weaker activity coincides with diminishing inflationary pressure. With that in mind, while stopping short of recommending an overweight position to government bonds and duration, we believe it now makes sense for investors to consider moving their government bond and duration exposure closer to their benchmark.

Where to hide if stagflation takes hold