China property: Not out of the woods, but higher quality developers will gain market share (Andrew Chong, Research Analyst)

Multiple credit events have recently flared up in China: a deposit crisis in Henan, a suspension of mortgages for some unfinished property projects, and lingering fear of further COVID-19 related lockdowns. While we do not see a systemic crisis, we are carefully monitoring downside risks, and continue to see opportunities in China corporate credit.

China continues to maintain its zero-COVID-19 policy. We recently cut our GDP forecast to 3.0% for 2022 (from 4.0%). Lockdowns have taken a toll on the administrative workload of the local governments and consumer sentiment. Prolonged weakness in the real estate sector has caused a reduction in land sales; hence, the short-term liquidity of some local governments’ fiscal revenues. When domestic risks arise, like the one in Henan, the timeliness and adequacy of a government reaction can fall short of market expectations.

In recent weeks, we observed a strengthening of local administrative measures to resolve the Henan deposit incident and the mortgage problem. Together with the Chinese government’s strong fiscal buffer, these events alone are insufficient to cause systemic risk. However, we are carefully watching tail risks on the downside, specifically if there is spillover or additional idiosyncratic events in other areas.

Despite slower GDP growth, China’s macro environment remains stable. Inflation and interest rate pressures are significantly more comfortable than in many other countries worldwide. This supports both rates and currency. We expect a sequential recovery in the second half of 2022 and the government execution model will adjust to the zero-COVID policy. The property sector will remain weak, but this problem is unlikely to spill over to other industries, such as banks. Demand for commodities should also slowly recover from a low base.

Investment implication: We are confident that China could ride out the storm. Bottom-up bond selection becomes even more critical. Among the sectors, we continue to prefer core state-owned enterprise in highly strategic industries such as infrastructure, utilities and high-tech. We are cautious towards property, Macau casino, small banks and weaker local government financing vehicles (LGFV).

China property: Not out of the woods, but higher quality developers will gain market share (Andrew Chong – Property)

In early July, the media reported that some homebuyers were boycotting mortgage payments for projects that have stopped construction. According to the news reports, these projects involved mostly the distressed developers. Based on a Github site that we track, around 320 projects, or about 1-2% of the market by our estimate, were involved. In the last week of July, media reported that the government is planning to establish a real estate fund to financially support several select property developers.

More direct support from the central government will be positive for consumer sentiment. We also expect the stronger state-owned developers should be less affected. Based on sales data in the first half of 2022, we have been observing a divergence between the performances of defaulted developers and the performing ones. We expect the higher quality developers to continue to gain market share despite a shrinking market size.

We believe the property sector is not out of the woods yet. Liquidity buffers becomes critically important to sustain through a prolonged period of stress. The spillover effect from the property sector to the financial sector is manageable and long-term fundamental housing demand remains stable. We are monitoring downside risks. While not our base case, if the number of projects affected by the mortgage boycott increases sharply, we could see contracted sales level decline further. 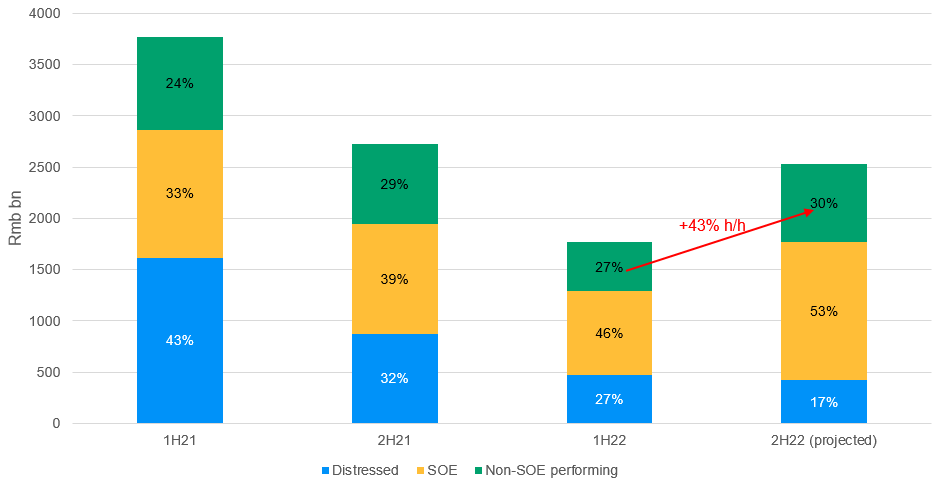 We expect mild deterioration of the credit quality of mortgages. Credit provisioning expenses are likely to increase in 2022-2023 for the banks. However, we are confident that the banking sector has ample of capital and liquidity buffer for this credit cycle. In particular, major state-owned banks have solid balance sheet to absorb potential credit losses. According to the management, each of the top 10 banks’ exposures to the risky mortgage loans is limited at no more than 0.04% of total mortgage loans. However, we are more concerned about the smaller regional banks with less capital buffer. Furthermore, the recent freezing cash deposit withdrawal in a few small banks in Henan are negative to the public’s confidence toward the smaller regional banks. Local finance authorities in Henan province announced that they would pay depositors unable to withdraw their money from four rural banks. We believe the Chinese government is committed to maintain stability in the banking system by proactively employ a wide range of policy tools.

Commodity demand is gradually recovering from low base in 2Q22, but the trend in the next few months remains uncertain in light of sluggish property demand, weak investment sentiment, the rainy season in China – which, occurs predominantly from May-September and subdued economic activities under the COVID-19 policy. Margin for steel and aluminum corrected to break-even levels, despite the rebound in automobile sales. Cement volume is at the trough of the last decade due to weak property demand. Coal miners are generating strong cash flow because of the high coal price (even factoring in the price cap from regulators).

Automobile sales volume recovered in June to +22.7% year-on-year, partially due to the vehicle purchase tax cut that began in early June and pent-up demand. We remain cautious on the strength of recovery in H2 given the relatively high unemployment rates (urban nationwide: 5.5%, urban 16-24: 19.3%) and weakness in the property market, both of which are negative for consumer sentiment. New energy vehicles (hybrids and battery electric vehicles) remain the bright spot in China with total new energy vehicles rising by 107.7% year-on-year in May and new energy vehicle penetration rising to 39.1% of sales YTD in May.

The Chinese insurance sector undertook a number of credit positive regulatory measures in 2022, including the adoption of C-ROSS Phase 2 solvency regime, which accurately measures an insurer’s solvency position.  More recently, the PBOC and CBIRC published for public comments a draft regulation to define domestic systemically important insurers subject to a tighter supervision.  In 2022, the insurance sector is expected to continue its more subdued growth given the weak economic growth.

Internet issuers also suffered from overall weak retail sales, but were more resilient than other sectors, as we saw more online demand during lockdowns. The credit profile of the sector is likely to remain resilient in the near future. De-listings from US exchanges remains a key risk as there has been limited progress in negotiations between the US and China so far. De-listings do not a large direct impact as most companies have completed a secondary listing outside the US, but the headline could negatively affect investor sentiment broadly.

We are cautious towards Macau gaming sector. Casinos have been shut since July 11th and were expected to reopen on July 30th. We expect 3Q will be another quarter of severe revenue pressure and cash burn. Gaming revenue for the sector remains in the range of 30 to 40% of 2019 levels, below breakeven levels of 50-60%. Looking forward, we see low visibility on the timing of recovery. Furthermore, we doubt how casinos fit into “common prosperity” in China. We notice government policy has been cracking down on cross border gambling, the junket business and the high-value customer segment in Macau. Even if we assume relatively more normal operating environment in 2023, the casino operators are likely to see high debt leverage. This underpins our cautious view towards the sector in the medium term, despite of the low default risk in the near term. We estimate that the industry should have sufficient liquidity cushion for at least coming 9 months assuming zero revenue. We also note that the casinos are increasingly relying on liquidity support from the shareholders, suggesting limited headroom in the bank financing.

2022 has been a brutal year in emerging markets. We see an alignment that suggests value has been created. It’s time to take another look.

Recent research shows EM corporate bond ratings are both more stable and less likely to default than their developed market peers. That may surprise some skeptics.