Monetary and fiscal coordination and the inflation risks

While we don't see inflation running away, we think the balance of risks has shifted and investors should consider the portfolio implications.

Rising inflation is unsettling investors. In the near term, inflation is likely to remain elevated as supply struggles to keep pace with the rebound in demand due to postpandemic bottlenecks. Whether or not the rise in inflation proves transitory ultimately depends on the extent to which monetary and fiscal policy remains too loose for too long.

We do see risks. Governments appear to have lost their fear of debt and have great ambitions to “build back better”. After a decade of struggling to generate inflation, central banks may be complacent and too late to tighten. While we don’t see inflation running away, we think the balance of risks has shifted and investors should consider the portfolio implications.

Equities have historically performed well in an environment of modestly higher inflation. Pricing power does, after all, generate profits. But some equity sectors will fare better than others. Real estate and core infrastructure have also historically been good inflation hedges.

Where is inflation heading in the short term?

It is not surprising that inflation has been high in recent months, particularly given oil prices are around 60% higher than they were a year ago. Even though energy now only makes up a relatively small 5%-7% of inflation baskets in developed markets, the rebound in demand for fuel has added to inflationary pressures. While that will fade over time, there are still other factors keeping upward pressure on prices at least over the remainder of 2021.

Covid has created supply bottlenecks, making it difficult for manufacturers to meet their orders. This isn’t just in one country either, it is a global story. Suppliers are taking longer to make deliveries as they struggle to meet elevated demand (Exhibit 1). Input costs for companies are also on the up as they scramble to get hold of goods to fulfil their orders. Covid has shone a light on logistical issues around shipping too, with strong consumer demand for goods (for example, purchases of US household furnishings are around 25% higher than before the pandemic) putting even more pressure on shipping costs. The rise of the Delta variant and the approach to dealing with it by restricting activity, taken by many emerging and Asian economies, means that these supply disruptions appear set to linger for longer than expected – ultimately increasing the chance that price pressures remain as we head into 2022. 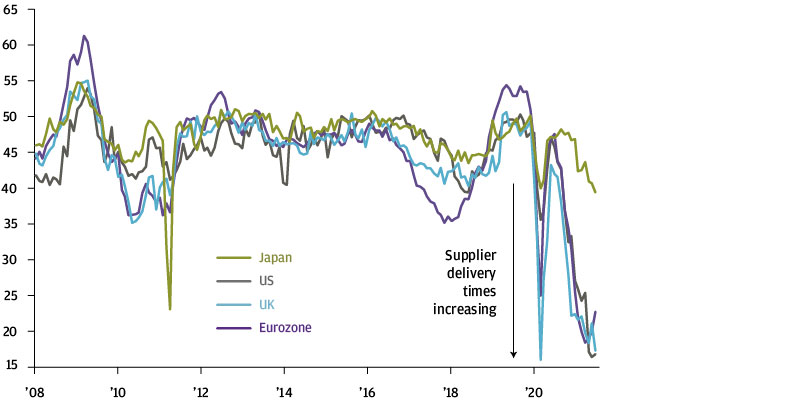 Recent history shows that companies facing higher prices generally pass at least some of these increasing costs onto consumers (Exhibit 2). A rapid rebound in demand1 , in conjunction with supply constraints, is therefore likely to push inflation materially higher in the coming months, as we have already begun to see in the US. 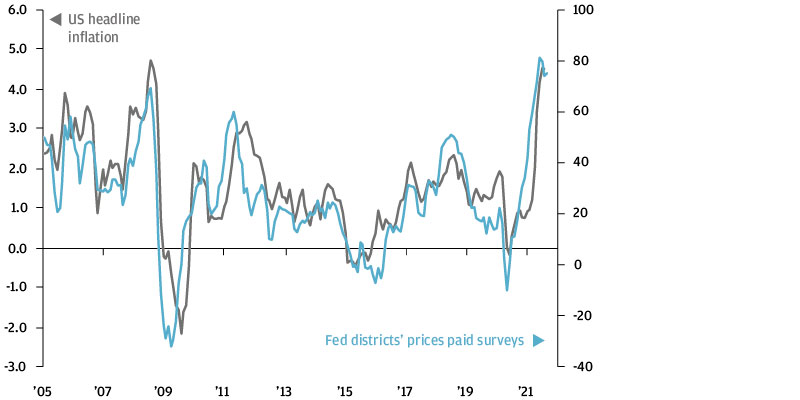 Will inflation be transitory or long lasting?

Investors will increasingly look to labour markets for signs as to whether higher inflation can be sustained. Unemployment benefits and stimulus cheques in the US appear to have discouraged workers from rushing back to the first job on offer. With the $300 boost to unemployment benefits, around 50% of employees who lost their jobs last year were actually financially better off receiving those benefits than they were in work. Competition from generous government benefits means many companies have perhaps been forced into paying higher wages to entice US employees back to work (Exhibit 3). With that in mind some US states ended enhanced benefits before they were originally scheduled to expire, but even so wage growth has been strong in recent months.

Exhibit 3: US NFIB jobs hard to fill and plans to raise workers’ wages 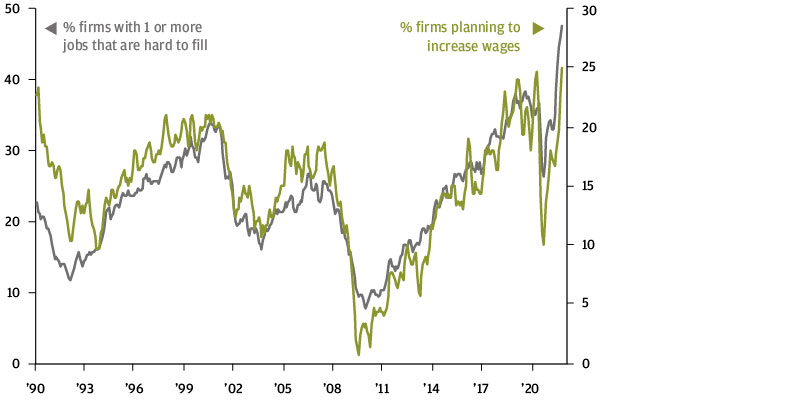 Now that the more generous unemployment benefits have expired, wage growth is more likely to be determined by the amount of slack in the labour market. Of the 22 million American jobs lost at the height of the pandemic, around three quarters of them have been regained in less than 18 months. A significant portion of the jobs that have not yet been regained are in the leisure and hospitality industry, which should boom once Covid is no longer impacting activity.

Even though overall unemployment is higher than at the end of the last cycle, there appears to be little readily available slack in the labour market. Part of this is because a large number of people have left the labour force and are yet to return, resulting in a greater number of job vacancies than people available to employ. The rapid recovery in demand is putting companies under pressure to re-hire quickly and at higher wages – average hourly earnings for the leisure and hospitality sector are already 14% higher than they were in 2019. What would make us more confident that wage pressures are sustained is if the remaining slack in the labour market is absorbed quickly.

Will fiscal and monetary policy prove to be the inflation game changer?

Ultimately, what matters over the longer term is how policymakers work to balance supply and demand. Some of the disinflationary supply forces that have been working to keep inflation low over the past decade are still in play, such as automation, globalisation and the de-unionisation of the workforce. But as Ben Bernanke, former Federal Reserve chairman, said in his famous “helicopter” speech, “…under a paper-money system, a determined government can always generate higher spending and hence positive inflation2 .”

It is a new fiscal regime that in our view has the potential to deliver higher inflation in the coming decade than was experienced over the last cycle. One mustn’t underestimate the role that government austerity played in the weakness of nominal activity after the financial crisis. For example, the UK government’s spending on public sector pay was the same at the end of 2019 as it was in 2009 – public spending on wages had effectively gone nowhere and public investment has been on a downward trend since the aftermath of the financial crisis. The impact in continental Europe was even starker. Government deleveraging wasn’t the only drag on demand. Households were similarly intent on paying down debts and commercial banks were less willing to lend in any case. As a result, the central banks had little hope of generating inflation. There were three channels by which monetary policy was supposed to encourage spending and inflation. The first was the bank lending channel, where lower borrowing costs were supposed to encourage firms and consumers to borrow and spend. The second channel was by easing government borrowing costs to encourage fiscal spending. And the third was via wealth effects, as central bank asset purchases boosted the value of financial assets and household wealth to encourage consumer spending.

Will governments and central banks continue to pedal even as inflationary pressures build?

Short-term fiscal support is being followed by longer-term spending plans. President Biden, fresh from his $1.9 trillion (or 9% of GDP) stimulus package, has drawn up proposals for another $4 trillion in spending over the next decade on infrastructure, education and social care. The European Union (EU) has agreed a long-term recovery package worth over 5% of EU GDP over the next six years, while UK public sector net investment is projected to be about a percentage point of GDP higher per year than during the last cycle. Governments appear to have lost their fear of debt and have great ambitions to “build back better”.

Consumers may also be willing to borrow. Household debt has fallen substantially over the last decade (Exhibit 5) and housing markets in many areas of the developed world are looking increasingly buoyant. 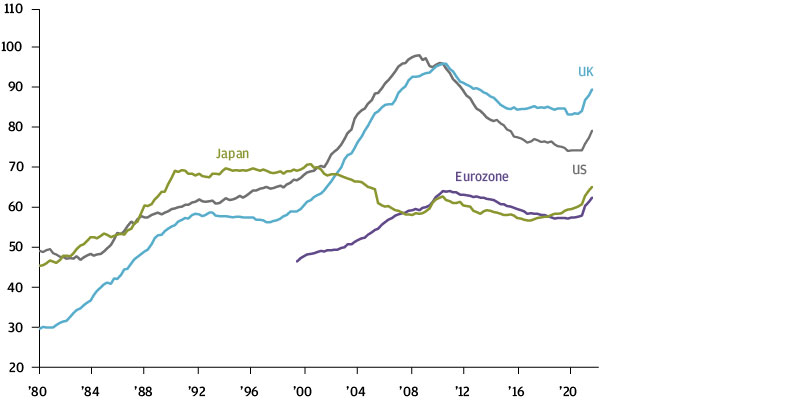 Will it be the central banks that stop pedalling? At the moment, they are showing no inclination to stop. The Federal Reserve has been clear that it would welcome a period of modest inflation overshoot. Much like the early 1960s, the central banks appear convinced that inflation is dead so they should prioritise other goals, such as reaching full employment. However, we are mindful of the lessons of that period. Inflation was roughly 1% from 1960 to 1965. By the end of the decade it had crept up to 6% and set the scene for the more spectacular inflation that was seen in the 1970s, when oil prices shocked the economy and gave rise to double-digit inflation. Oil prices may have lost the capacity to shock given reduced energy dependence, but food prices may be a risk given the degree of environmental degradation in recent decades.

Overall, in our view the risks to inflation over the medium term come from the possibility that post-pandemic monetary and fiscal policy will stay too loose for too long. The risks appear greater in the US and UK than in continental Europe at this stage.

How would we prepare portfolios for rising inflation?

Inflation is typically the enemy for bond investors. It nibbles away at nominal fixed coupon payments. While inflation-linked bonds, such as TIPS (Treasury inflation protected securities), will outperform nominal bonds in the event of an unexpected pickup in inflation, inflation expectations priced into these bonds have already risen significantly over the last year. Despite TIPS currently offering a negative yield, they may make sense as an inflation hedge if you think inflation will average more than it is currently expected to over the next decade. However, inflation linked bonds are still vulnerable to potential rises in real yields. Gold is similar in that it tends to do well when real yields fall but faces challenges when real yields rise.

Equities usually provide protection against moderately rising inflation, as corporate profits tend to rise alongside prices (Exhibit 6). As long as price rises are being driven by strong demand, equities tends to benefit. But if, because of supply issues, input costs rise against a backdrop of weak demand, it’s harder for companies to pass on these costs and corporate margins could begin to be hurt. Over the next few years, we expect demand to be strong and so equities should protect against inflation. Historically, equity investors have really only needed to worry about inflation when it caused central banks to tighten to such a degree that it caused a recession, or when inflation was so high that it led to negative real returns despite positive nominal equity returns, as was the case in the late 1970s.

While above-target inflation isn’t therefore generally a problem for equities, the challenge for equity investors is that rising inflation is usually accompanied by higher yields. Higher bond yields may put pressure on some areas of the market that are trading on loftier valuations, having benefited from the recent low yield environment. Therefore, focusing on cheaper parts of the market that tend to do well in rising yield environments may make sense.

Investors may also look towards real assets, such as property or core infrastructure, to hedge against a rise in inflation, as income from these types of real assets is typically linked to inflation. While sustained above-target inflation isn’t a given, seeking some protection in the form of equities and real assets, while reducing exposure to fixed income, may make sense given the balance of risks has probably shifted towards more inflation, rather than less.