Where to hide
if stagflation takes hold

The war in Ukraine, China’s zero-Covid policy and tighter global monetary policy have raised concerns about a prolonged period of stagflation. This term refers to an economy plagued by low or negative growth, rising unemployment yet stubbornly high inflation, a combination of which we haven’t experienced since the 1970s.

Stagflation is the worst-case scenario for investors since central banks have to tighten into slowing growth, causing both stocks and bonds to fall in price. Fears of stagflation have caused the traditional 60:40 portfolio to trade over 18% lower year-to-date, having made on average a positive return of 7% per annum between 2008 and 2021.

While at first glance there seems to be no place to hide for investors in a stagflationary environment, the analysis of the market developments during the 1970s (Exhibit 15) and the three bear markets that occurred during this period allow us to make a few observations which provide some guidance on how to navigate this environment.

Energy, materials, telecoms and utilities should be more resilient. Exhibit 15 shows the nominal, annualised returns over the 1970s. Sectors that proved most resilient were energy and materials, which benefited from high commodity prices, while defensive sectors such as telecoms and utilities were also well supported. Value stocks and small caps also consistently outperformed their growth and large cap counterparts, even though small caps suffered relatively more during the bear markets. 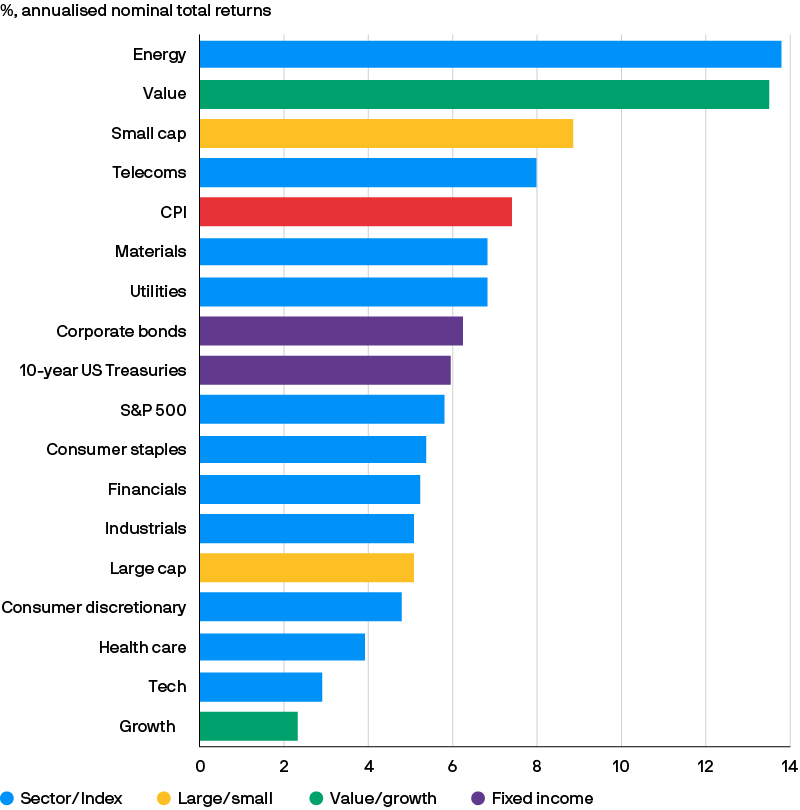 Source: BLS, French, Haver Analytics, Refinitiv Datastream, Shiller, Standard & Poor's, Ibbotson, J.P. Morgan Asset Management. Returns shown are from the beginning of 1970 to the end of 1979. Data as of 31 May 2022.

Assets that provide sustainable income are also attractive in a stagflationary environment. When the beta of markets is less supportive and capital gains cannot be relied upon, dividends and coupons become more important. For example, dividends accounted for two thirds of the S&P 500’s total return in the 1970s, while historically they have, on average, only accounted for one third of its total return (Exhibit 16). High coupons were a significant factor of the performance of both the corporate and government segments of the fixed income space flattering fixed income’s nominal returns in the 70s.

Exhibit 16: Dividends accounted for a large portion of the S&P 500’s return in the 1970s
S&P 500 total return: Dividends vs. capital appreciation 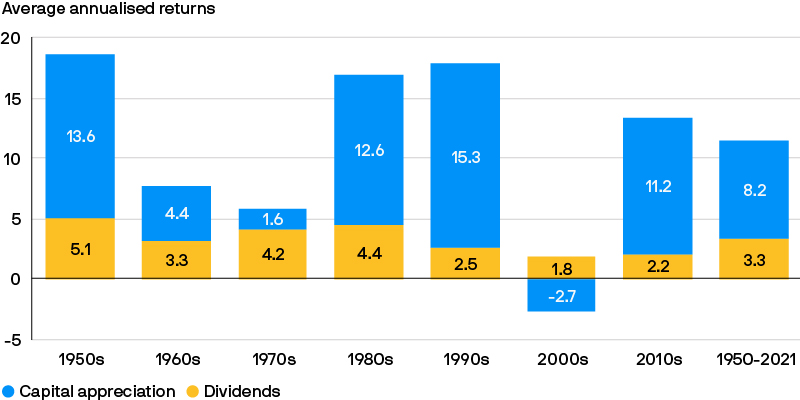 Alternative assets, for those that can access them, provide some of the most attractive offerings. Real estate and infrastructure have low correlations to equities and bonds and generate income streams that tend to rise with inflation.

It’s also worth noting that although the 1970s were certainly challenging for investors, it was not a lost decade for financial markets and it generally paid to stay invested. Indeed, even though the S&P 500 experienced drawdowns of up to 46%, it still posted an annualised total return of 5.8% over the period as a whole.

Investors should also be mindful that short-term challenges often tend to sow the seeds of long-term opportunity. The oil shocks in the 1970s forced many countries to substantially reduce their oil intensity not only by reducing their oil consumption but also by investing in new sources of energy, such as renewables or nuclear. Industries, such as the car industry, changed dramatically during this period with Japanese car manufacturers gaining substantial market share thanks to more fuel-efficient models. Like in the 1970s, the current energy crisis will turbocharge the energy transition and investors will need to identify the relative winners of this trend. Valuations for climate technology companies have fallen significantly in the recent broad growth sell-off but if earnings prove resilient as the transition is accelerated then these companies might now offer a compelling medium-term opportunity.

Government bonds: Getting back to benchmark