Review of markets over February 2022

Equity and bond markets experienced a difficult month in February as concerns surrounding the Russian invasion of Ukraine took hold. In the first half of the month, expectations for the number of interest rate hikes that would be delivered by the US Federal Reserve (Fed), the Bank of England (BoE) and the European Central Bank (ECB) ramped up quickly. Investors were concerned that the central banks may dampen growth in their efforts to get inflation under control. In the second half of the month, investors' attention was absorbed by the conflict in Ukraine. This dampened expectations for rate hikes compared with the intra-month peak, and also delivered a further hit to growth expectations. For the month overall, global growth stocks were hit hard again, falling by 3.5%. Value outperformed growth but still fell by 1.6%. Developed market equities declined 2.5% leaving them down 7.6% for the year-to-date. The Global Aggregate bond index also fell 1.2%. Commodities gained over 6% with Brent oil and natural gas prices rising. 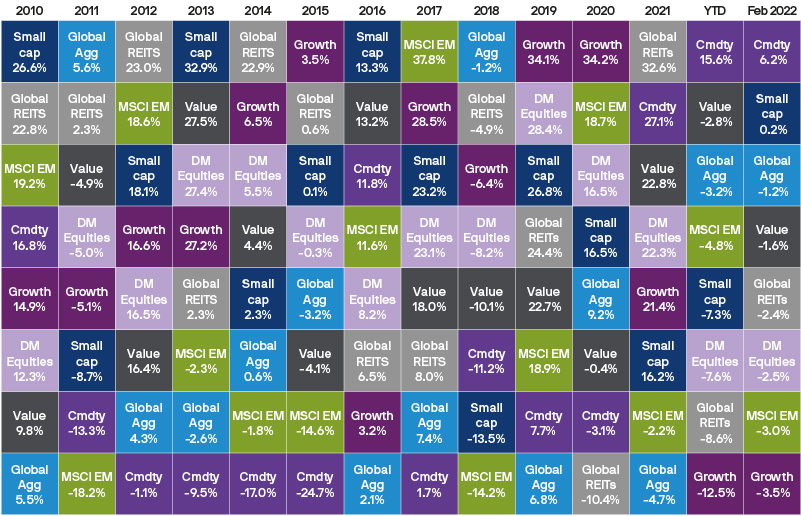 The evolution of the Russia – Ukraine conflict remains uncertain. At this stage the clearest economic impact on developed markets is via food and energy prices. Russia is a significant exporter of commodities, accounting for 13% of global crude oil production, 17% of natural gas production and nearly a tenth of global wheat supplies. Brent oil ended the month at $100 per barrel and European natural gas prices rose 15% in February. Higher energy prices could fuel higher or at least more persistent inflation, eating into household incomes.

Whether central banks react to higher energy prices by increasing the magnitude or speed of interest rate rises in order to combat inflation, or reduce their pace of tightening in order to support the economy is not yet entirely clear. The answer will depend on the extent to which higher energy prices dampen growth or alternatively fuel strong wage rises as workers try to protect their purchasing power amid a tight labour market. However, towards the end of the month bond markets scaled back rate hike expectations for 2022, causing these expectations to end the month only marginally higher than they were at the start of the month.

Source: FTSE, MSCI, Refinitiv Datastream, Standard & Poor's, TOPIX, J.P. Morgan Asset Management. All indices are total return in local currency, except for MSCI Asia ex-Japan and MSCI EM, which are in US dollars. Past performance is not a reliable indicator of current and future results. Data as of 28 February 2022.

If Russian commodity exports are disrupted, it would have a significant impact on the European Union (EU). Around a quarter of its crude oil imports and 40% of its natural gas imports come from Russia. The MSCI Europe ex-UK Index fell by over 4% over the month. Concerns over the reliability of Russian energy supplies will put further pressure on European governments to transition away from imported fossil fuels and towards domestically-generated renewables over the long-term. We explore the impact of the clean energy transition on broader commodity markets in our latest note; On the Minds of Investors: A new supercycle – the clean tech transition and implications for global commodities.

Business surveys such as the flash eurozone composite Purchasing Managers' Index (PMI) indicated an acceleration in economic momentum in Europe. Eurozone headline inflation reached 5.1% year-on-year – its highest level on record. Despite this, more than 50% of the headline number is coming directly from energy inflation. At its February meeting, the ECB didn't take the potential for rate hikes this year off the table but did suggest that a calm and gradual approach would be taken.

The labour market is improving in the eurozone. The unemployment rate fell to 7% – a record low since the euro's inception. While eurozone wage growth is expected to rise, recent data show that negotiated wages were just 1.5% higher in the fourth quarter of 2021 relative to the prior year, lagging behind the US and UK. Tight labour markets are a key component of why we think inflation is likely to be sticky and we cover this in more detail in part two of our On the Mind of Investors inflation mini-series: The Labour Market is Key.

Despite the re-election of Italian President Mattarella, which allowed Mario Draghi to continue as Prime Minister until at least the 2023 general elections, there were concerns over the ability of Italy (amongst other countries with high debt-to-GDP levels) to manage rising interest rates. The spread between 10-year Italian government bond yields and German yields rose to 1.6% - nearly 25 basis points (bps) higher over the month. Italian government bonds fell 2.4%. 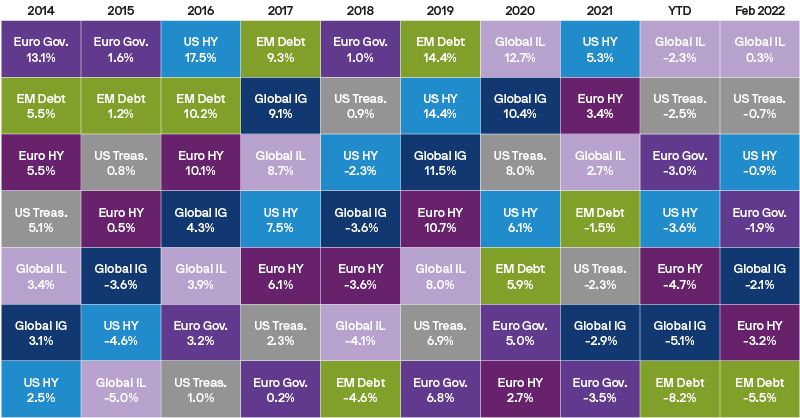 Heading into February, concerns over the strength of the US consumer had been beginning to increase but both the flash February PMIs and the January retail sales data provided some relief. The services PMI business survey rose sharply, as did the manufacturing PMI. Retail sales beat expectations, rising 3.8% after a disappointing December release, suggesting that US consumers had delayed spending as a result of Omicron rather than curtailed it.

The rebound in consumer spending translated into yet another upside surprise on inflation. US headline inflation for January was 7.5% year-on-year, comfortably ahead of expectations. Looking closer at the details, both core goods and core services inflation increased their contribution to the headline number, suggesting that underlying inflationary pressures are continuing to build. The January jobs report was also healthy despite concerns that Omicron related business closures would deliver poor job growth. Non-farm payrolls increased by 467,000 jobs, while wages grew by 5.7% relative to a year ago.

With high inflation and strong job gains in mind, the market now expects the Fed to deliver nearly six rate hikes by the end of the year. Rising inflation and bond yields have caused investors to worry about the corporate earnings outlook but earnings season for the fourth quarter provided comforting results. US companies registered earnings growth of over 30% year-on-year versus expectations of 20% at the start of reporting season. Despite this, concerns over the situation in Ukraine and tighter monetary policy hurt equity markets and the S&P 500 declined by 3% in February. US Treasuries declined by 0.7%. 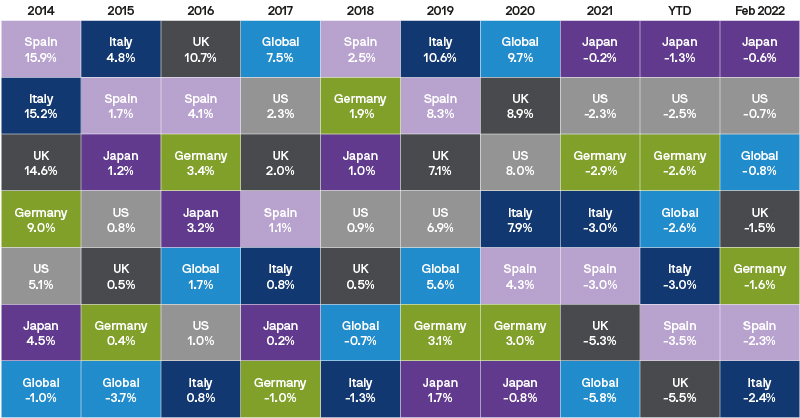 On the 3 February, the BoE raised rates by 25bps. After significant swings in pricing over the month, the market ended February expecting interest rates to rise above 1.5% by the end of the year. Headline inflation for January came in at 5.5% year-on-year, while core inflation rose to 4.4% year-on-year. With a significant household energy bill increase coming in April, the inflation readings are likely to climb higher before they come down. Rising commodity prices have helped the UK equity market this year, given the significant weighting of energy and mining stocks. The FTSE All-Share fell only 0.5% over the month. The UK government bond index fell 1.5%.

Clearly uncertainty is elevated at the moment. In times of uncertainty, it makes sense to have more moderately sized relative risk positions in portfolios. For the global economy, what happens to energy prices over the coming weeks and months is probably the most important thing to watch and in turn how central banks react. 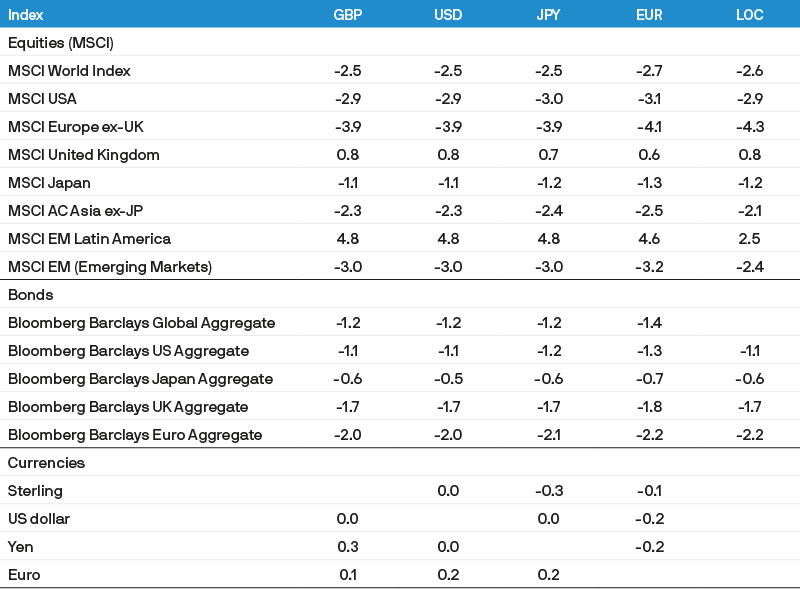 Source: Bloomberg Barclays, MSCI, Refinitiv Datastream, J.P. Morgan Asset Management. Past performance is not a reliable indicator of current and future results. Data as of 28 February 2022.