The Federal Reserve is widely expected to start its hiking cycle next month, and the reasons for getting started are clear: inflation is far higher and unemployment far lower than the start of any previous hiking cycle. This justifies the ~150bps of hikes priced by year-end, a fast pace compared to the last two cycles. The key question now is how far will central banks go? At the moment, the terminal rate seems stuck in limbo and it's unclear if we should be asking how low will we go or how high can we fly? As of today, all developed market pricing remains pessimistic, signaling that the Federal Reserve will only get to ~1.7% (compared to the previous cycle peak of 2.5%), as well Europe and the UK only hiking to 0.6% and 1.2%, respectively. In this blog, we explore the reasons why the terminal rate may be higher or lower this time round and conclude with what might give the market the confidence to re-price higher.

Figure 1: US Inflation is high and the labour market is tight

Reasons for a higher terminal rate

The key reason for a higher terminal rate this cycle is that all central banks are hiking this time round compared to the previous cycle where the Fed were going it alone. US rates diverged from the rest of the world dramatically in the last cycle, boosting the US Dollar and tightening global financial conditions. This was a key limiting factor that will not be present in this cycle as all central banks are on the move to bring inflation down.

Figure 2: All Central Banks are on the move 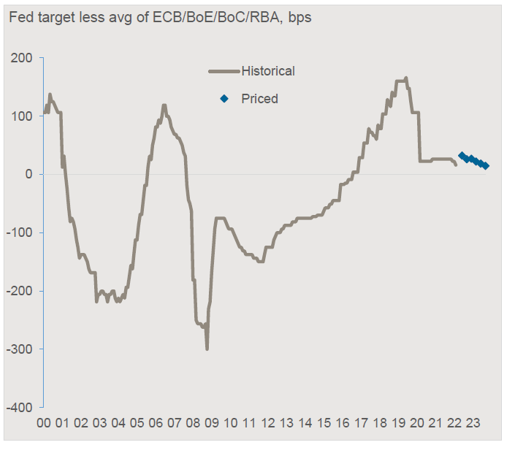 Secondly, there are reasons to believe that productivity can rise at a faster pace in this cycle leading to strong growth and higher terminal cash rates. Significant policy support over the last two years has resulted in companies that are cash rich, credit that is freely available and capex expectations that are at multi-decade highs. On top of this, there is scope for a significant productivity tailwind from the structural changes forced upon companies and societies as a result of Covid-19. For example, the technological shift in healthcare has been rapid - in the UK, a repeat prescription is a click of a button away, not a 30 minute in-person appointment anymore. 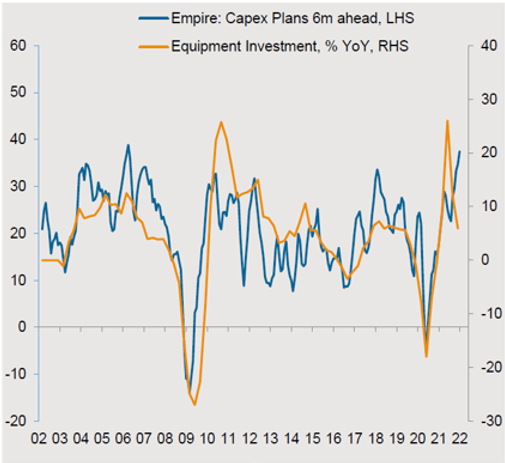 Figure 4: Inflation Expectations on the rise 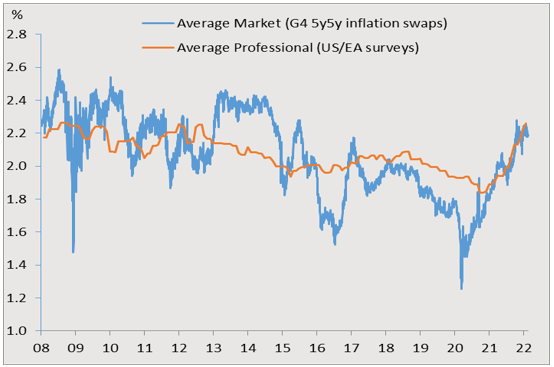 Reasons for a lower terminal rate

The first reason to believe in a lower terminal rate is simply the historical trend. Since the 1980s, it has been extremely rare for the terminal rate to exceed its previous highs – central bank tightening has either tipped us into recession, over-tightened financial conditions or both. So it is worth exploring a few key risks to our view for higher terminal rates.

Figure 5: Real cash rates have been falling since the 1980s 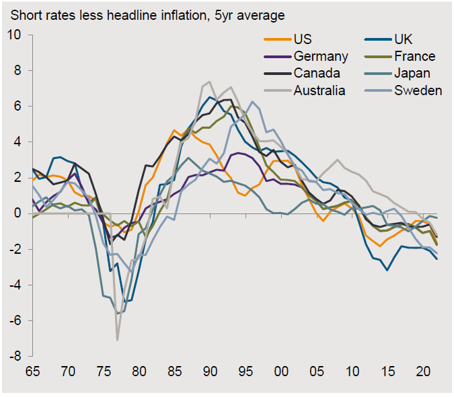 Central banks have indicated that their balance sheets will be wound down alongside rate hikes, far more aggressively than the last cycle. This is still relatively unchartered territory for a market that has become conditioned to low volatility and loose financial conditions – if central banks reduce their balance sheets too quickly, then tighter financial conditions may presage a slower hiking cycle or even a pause.

Furthermore, as wages rise we may see two phenomena at play. The labour market pool may expand as wages rise, or firms may decide to invest in capital which would see productivity rise – both would make labour supply constraints less acute. Whilst stronger labour force growth and productivity tend to mean higher longer term rates, it would likely lead to a slower hiking cycle. The reality is that this simply provides a longer time for an economic shock to de-rail the cycle before we can reach a higher terminal rate. 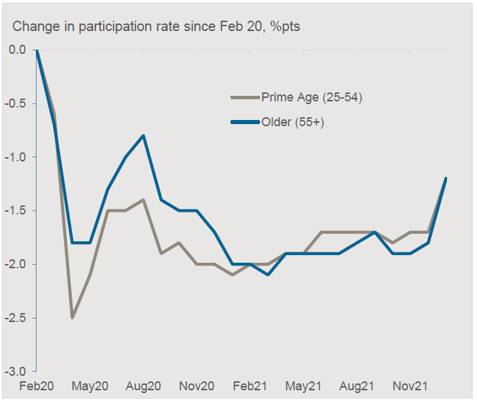 Finally, an argument for lower terminal rates is demographics, although it can be argued its overall impact is uncertain. For example, an individual embarking on a new career is more likely to take out a mortgage than their parents, so as populations’ age there tends to be less demand for borrowing – and even within younger cohorts, many borrow large amounts later in life due to slower household formation. Meanwhile, older cohorts typically de-lever and save for retirement. Falling demand for borrowing and a greater supply of savings should exert downward pressure on interest rates. The flipside of this argument is that we may have reached a tipping point whereby baby boomers are about to spend their nest eggs, leading to a consumption surge and reduced global savings.

On balance, it is not clear to us why the terminal cash rate in the US should be lower than the 2.5% it reached in the previous cycle, and there are strong reasons to believe that this time it could actually be higher. The key question for investors is when will the market price this? Looking at past tightening regimes, it is a combination of improving growth, coupled with financial conditions remaining relatively easy that has given the market the confidence to move it higher.

Hence as the cycle progresses, assuming growth holds up and we avoid any exogenous shocks, we believe it's possible for DM central banks to jump over the limbo stick this time around, achieving terminal rates of at least 2.5% in the US, up to 1% in Europe, and more than 1.5% in the UK.