China’s first quarter growth was stronger than expected. Having said that, the number fails to capture the negative impact of the latest Covid outbreak which has discouraged consumption, exacerbated the property downturn and disrupted production.  With authorities reiterating their commitment to dynamic zero-Covid approach, investors continue to expect additional fiscal and monetary policy support. However, the latest muted actions by the People’s Bank of China (PBoC) suggest the central bank is reaching the limits of monetary policy – which are expected to have direct implications for onshore interest rates.

Benefitted from an easing of fiscal and monetary policies during the second half of 2021, China’s economy rebound over the past six months (Fig 1a).  1Q22 GDP increased by 4.8%y/y as robust manufacturing and exports offset muted domestic consumption and construction.  Concurrently, strong global growth raised hopes that the government could achieve its ambitious 2022 growth target of 5.5%.

However, a spate of new Covid cases in late February rapidly evolved into the worst outbreak in two years, triggering restrictions and lockdowns across multiple cities and provinces. Notably, Shanghai – a city which accounts for 4% of China’s GDP, 11% of its auto production and 5% of its services, remains in lockdown for the fifth week.  Despite the burgeoning negative economic impact, the government recently reemphasized the benefits of its zero-Covid strategy. This suggests the service, property and manufacturing sectors are likely to remain constrained for the foreseeable future. 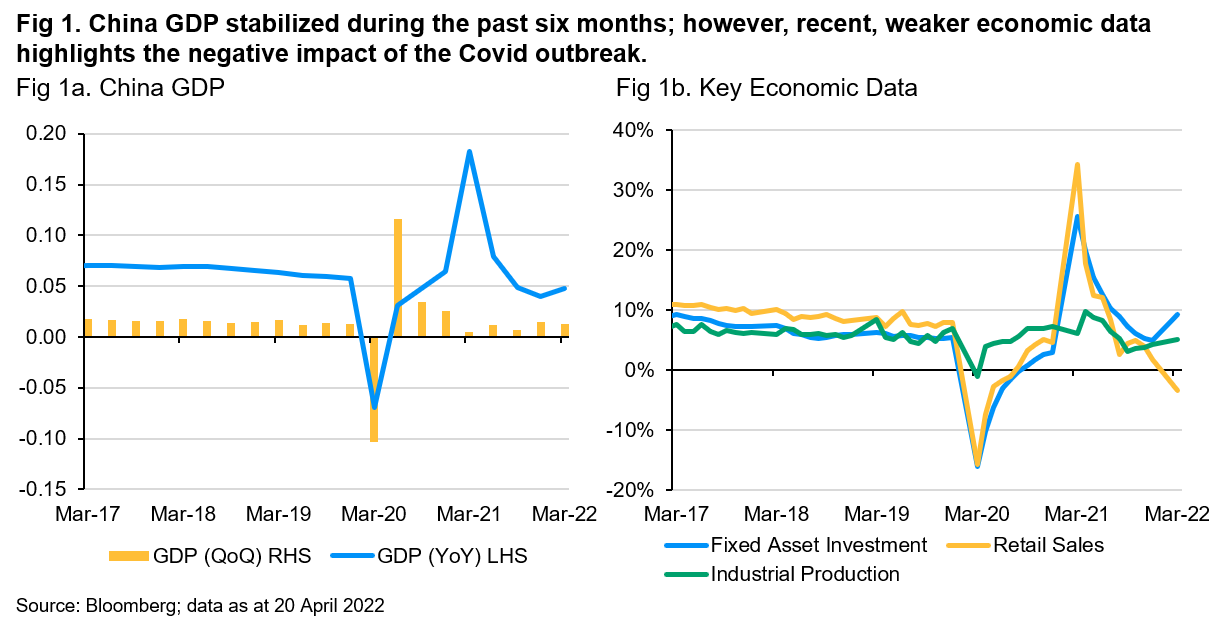 While the latest key economic data for March (Fig 1b) was better than expected, it has yet to fully reflect the recent severe lockdowns.  Nevertheless, the sharp fall in retail sales highlights that consumption is likely to be the hardest hit sector.  Adjusting for the lockdowns and heightened geopolitical risks, the International Monetary Fund and brokers have trimmed their 2022 China growth forecasts, with the former is now estimating GDP of 4.4% versus 4.8% previously.

Responding to the risk of a sharp economic downturn, on Friday 15th of April, the PBoC announced a broad based 25bps Reserve Requirement Ratio (RRR) cut (Fig 2a) plus an additional 25bps cut for smaller banks.  This will leave the weighted average RRR at a historic low of 8.1%.  The rate cut was widely anticipated following several mentions by Premier Li at recent State Council meetings. Effective on 21st of April, the cut released approximately CNY530bn of liquidity and is expected to save banks approximately CNY6.5bn in interest rate charges annually.

The delay in announcing the RRR cut, its small scale and the lack of accompanying MLF (Medium Term Lending Facility) or LPR (Loan Prime Rate) cuts (Fig 2b) disappointed investors, whilst highlights the PBoC’s dilemma.  Lower interest rates are unlikely to stimulate Covid constrained growth while risking higher leverage, capital outflows and currency weakness as US-China interest rate differentials narrow.  This implies the latest RRR cut represents a signal of dovish aspiration rather than serious intent. It also suggests that additional rate cuts are unlikely, especially as the US Federal Reserve is about to embark on a period of aggressive rate hikes.  Meanwhile, the RRR rates of many smaller banks are already at the unofficial floor of 5%. This implies the PBoC’s capacity for additional rate cuts, should the economy deteriorate further, is limited. 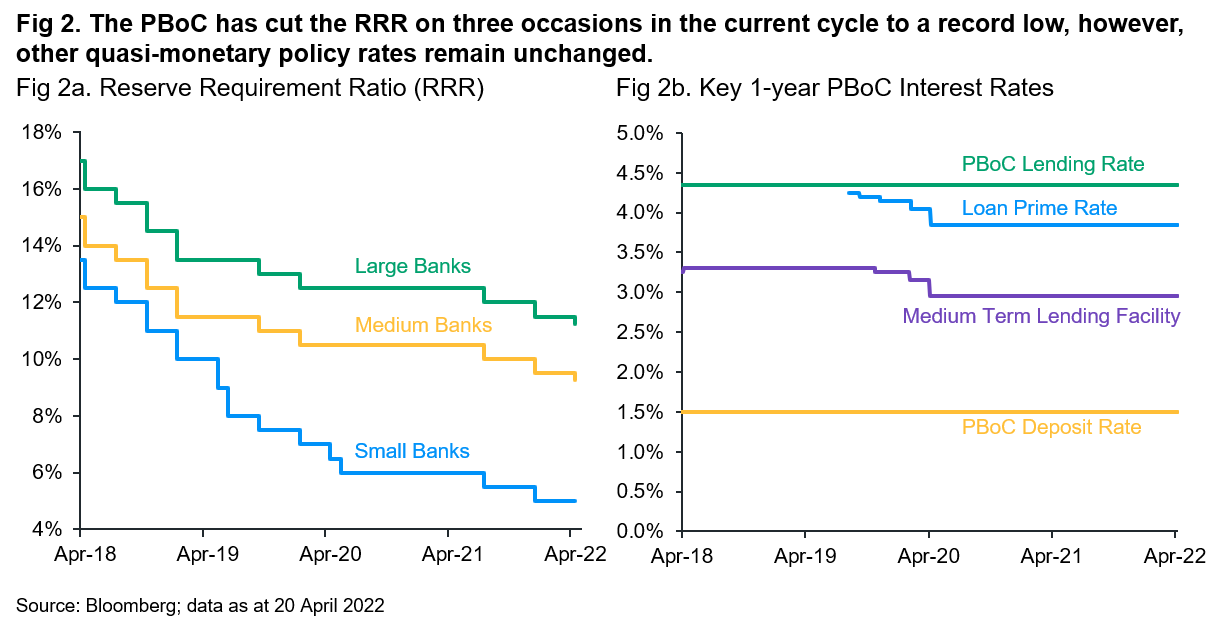 Although the PBoC’s monetary policy is likely to remain unchanged for the foreseeable future as it prioritizes “prudent monetary policy to ensure overall prices are stable”, market driven interest rates have diverged as the central bank also maintains its focus on ensuring “current levels of liquidity are ample”.

Longer tenor yields (Fig 3b) have edged higher and the curve has steepened as investors acknowledge the limitations of monetary policy and the authorities’ pivot to more effective fiscal policies, including tax cuts and infrastructure spending, to support economic growth.  In contrast, shorter tenor yields have declined (Fig 3a), with repo and Shibor yields slipping to new post-Covid lows as tax refunds and the RRR liquidity release boost market liquidity significantly higher than normal.

As the government prioritizes pandemic prevention and economic growth is still, apparently, within tolerance, the probability of further PBoC monetary policy rate cuts has declined.  Nevertheless, short tenor rates are likely to remain under downward pressure for the foreseeable future as excess liquidity continues to weigh on the market. As potential returns are likely to decline, we believe cash investors should consider segregating cash as well as diversifying across different investment strategies and tenors to seek an optimal risk-return opportunity.

Diversification does not guarantee investment returns and does not eliminate the risk of loss. Yields are not guaranteed. Positive yield does not imply positive return.