Given the maturity of this economic and market cycle, investors may wish to shift towards value stocks to increase portfolio resilience. However, it may not pay to abandon growth as a style completely given the rapid pace of technological change and disruption.

Investors may wish to turn increasingly towards their steady, experienced players-the value stocks-while keeping a selection of growth players to position for the future.

Managing investments can be like managing a club football team-you can’t just pick all the most up-and-coming, expensive players. It’s better to include some footballers who are past the peak of their international careers and hence a bit of a bargain, but are still likely to be solid and reliable members of the team for several years to come. Carefully selected value stocks work for a portfolio in a similar way. Growth stocks, on the other hand, are the potential stars of the future. Like promising young footballers, they have a bit of work to do in the coming years and lots of room for development. They are more risky, though, because they could get injured before their large transfer fee pays off. But they also have the potential to take the team to the next level.

Managers will want a team with both types of player. But late in a difficult game they might wish to switch towards the value players - those with a bit more experience - which can pay dividends when the pressure is on.

MSCI use several metrics to characterise a stock as value or growth, such as the price-to book (P/B) ratio, 12-month forward price-to-earnings (P/E) ratio, dividend yield, and short and long-term earnings and sales growth. Value stocks - the steady players - have a lower P/B, a lower P/E and a higher dividend yield than the market average.

Growth indices are often highly skewed towards technology stocks. Information technology currently has a weight of 23%1 in the MSCI World Growth Index (in Europe the growth index is more evenly split across sectors). It is no surprise that the growth style has performed particularly well when investors have been excited by the potential returns from rapid technological innovation, such as during the 1990s tech boom. By contrast, the MSCI growth index underperformed through the stock market expansion of the 2000s, which was focused on housing, finance and commodities rather than technological innovation.

When does growth tend to outperform? 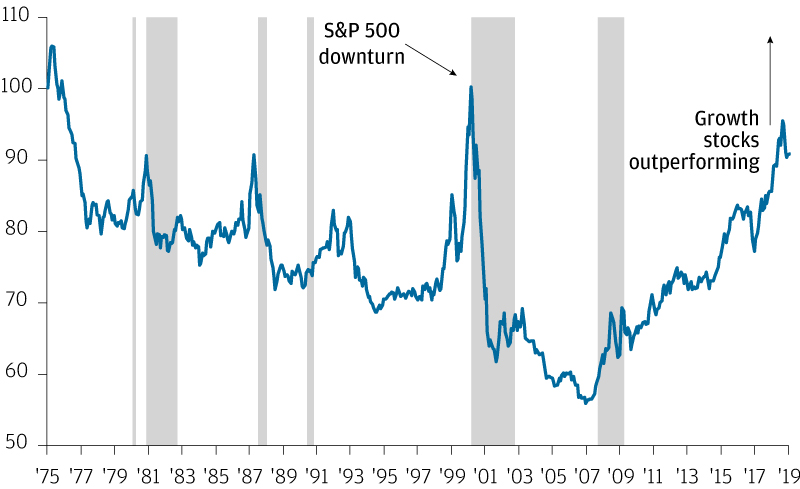 When does value tend to outperform?

Value stocks tend to outperform when the economy is in a more difficult phase. This is because during a bear market their lower valuation means they tend to fall by less than more expensive growth stocks and their higher income often offers a buffer for total returns. Value also often outperforms in the early stages of a recovery. This is in part due to the high weighting of financials in value indices. The early stage of the cycle normally benefits the financials sector because banks borrow at short-term interest rates and lend at longer-term interest rates, which means a steep curve increases their future profitability.

Exhibit 2: Valuations for value and growth 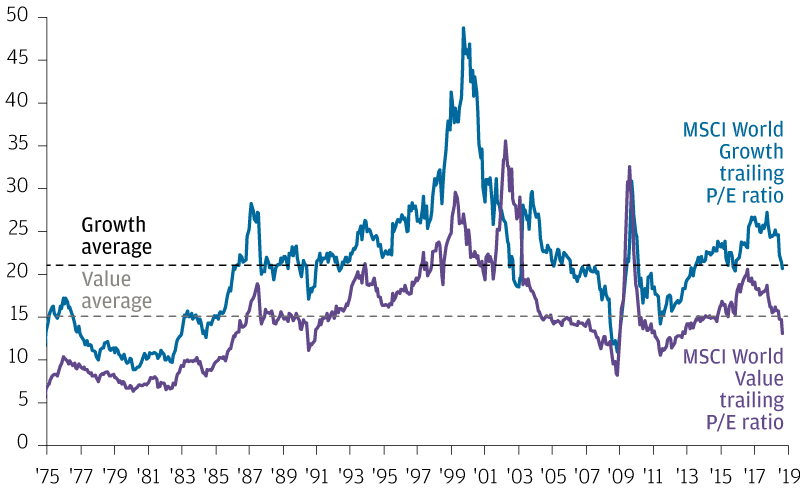 Source: MSCI, Thomson Reuters Datastream, J.P. Morgan Asset Management. Trailing P/E ratio is calculated using earnings per share for the last 12 months. Past performance is not a reliable indicator of current and future results. Data as of 31 December 2018.

Attractiveness of value and growth in the current cycle

Given the advanced nature of the cycle, and the relative pricing of the two styles, investors may wish to consider adding a carefully selected group of value stocks to a portfolio. Historically, at least, value has tended to perform better in the initial recovery phases after a bear market (see also How should we prepare portfolios for the next downturn? 2). In previous downturns, and indeed during the correction in the fourth quarter of 2018, value stocks fell less than the overall market and outperformed growth stocks. The exception to this rule was the financial crisis, but a repeat of a financials-led downturn seems unlikely given banks are now more highly capitalised and have less leverage than 10 years ago.

However, growth stocks are perhaps unlikely to underperform to the extent that we saw following the tech boom. In our view, structural tailwinds persist from the potential for further rapid technological advancement and disruption, while valuations for some growth stocks have come down significantly.

Exhibit 3: Performance of value and growth during downturns 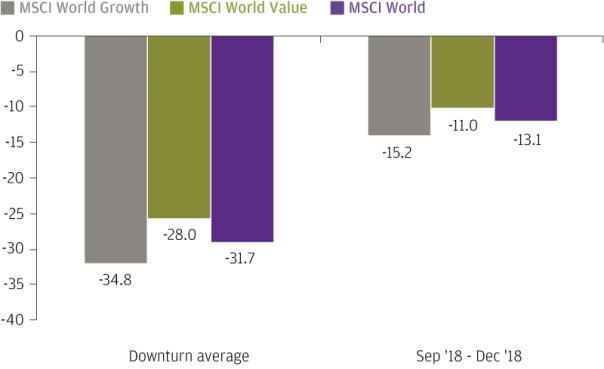 Source: MSCI, Thomson Reuters Datastream, J.P. Morgan Asset Management. Index levels are calculated using total return indices in local currency. Downturn average is the average % return of the respective indices over the last five downturns, which came during the period from 1980- 2009. Past performance is not a reliable indicator of current and future results. Data as of 31 December 2018.

As we near extra-time in this expansion investors may wish to turn increasingly towards their steady, experienced players-the value stocks. At the same time, it’s important not to lose sight of how the game is evolving in the long run and to keep a selection of growth players to position for the future.

But not all cheap players are a bargain. Only those with lots of life left in them-that are not in positions threatened by a new star player-will complement a team. Similarly, not all young players will crack under the pressure of more testing times. But a team consisting of only young expensive players could struggle against a more balanced mix of youth and experience as the final whistle approaches. And given the more balanced team is less expensive to assemble, it seems like a less risky option at this stage in the cycle.

2How Should We Prepare Portfolios for the Next Downturn?, Michael Bell, J.P. Morgan Asset Management, October 2018.

Start the week with our snapshot of key economic and market trends from the previous seven days.