Liquidity generally refers to the notion of one’s ability to buy or sell a security inclusive of the expected price. In reality, it is one of those fantastic financial terms that can mean so many different things, depending on one’s perspective. For the Jack Reacher fans, “details are important.”

On very rare occasions, as a trading desk, we may be presented with questions such as, “what was the bid/ask spread for the on-the-run 10-year US Treasury Note at 2:50pm EST on Tuesday, November 8th? Was there depth in the Treasury market for the observed pricing? Was your expectation of market depth higher or lower than what was observed, and what would explain that difference?” Curious questions for sure, and the manner in which they are asked scratches the surface of a number of different issues surrounding liquidity, in particular for over-the-counter markets. Ultimately, the answers only leave the inquisitor with a finite understanding of specific liquidity, for a specific security, at a specific point in time. The more common (but broader question) is: “How is liquidity in the US Treasury market?” which forces the responder to begin with a caveat of what they are going to assert.

In this blog, we will define liquidity as the ability to transact without impacting the price of a financial asset, all things being equal, which of course they never are (the first and second caveat…). So, let’s begin with what, by most observations, has been the most topical subject for “liquidity” reporting in the fixed income market of late: the US Treasury Market.

In the US Treasury market, bid/ask spread - the price at which one can buy or sell a security at any given point in time, and market depth - the amount of a security one expects to be able to buy or sell, have deteriorated since the US Federal Reserve began its latest hiking cycle. These two metrics have weakened as the marketplace adjusts to central banks, globally, tightening monetary policy, alongside the broad based elevated market volatility that those central bank actions brought.

Market based observable data1 of US Treasury securities suggests that the bid/ask spread on a range of US Treasury securities ranges from roughly 0.8 to 1.8x wider relative to where we began this year, as seen in Figure 1. Realistically, while there are pockets of the market that have seen bid/ask spreads narrow this year, this analysis aligns with our experience when transacting. We would agree that the vast majority of observable bid/ask spreads are wider from the start of the year, albeit, not at the alarming rate that is sometimes advertised in the media.

Figure 1: Relative Change of US Treasury Expected Cost by tenor

A look at exchange traded futures contract pricing data, would lead one to conclude—fairly non-contentiously—that market depth for US Treasury Futures contracts is also lower from the start of this year as shown in Figure 2. This is illustrated through the view of an execution strategy referred to as “sweeping the stack”, which helps us understand market depth. A nebulous concept, especially when one considers that it’s a rarely used approach to executing US Treasury Futures contracts. Theoretically, for analysis purposes, one considers a threshold to monitor—such as 5,000 contracts—and continuously monitors and calculates what the cost to trade those 5,000 contracts would be (assuming that you traded at observable prices in “the stack” until your demand was met). For example, if I needed to buy 5,000 contracts of a ten-year treasury futures, I would calculate the offered side cost in price relative to the initial mid-market price of what is observed for 5,000 contracts. While the data can be analyzed to garner a perspective into observable market depth, the lack of usage of “sweeping the stack” as a practical execution strategy also gives some insight into the limitations of the analysis. While we will not dispute the assertion that observed market depth is indeed lower year-over-year, we think it’s very important to better appreciate the tactics and strategies one might utilize to access market liquidity, an aspect that is often left undiscussed…perhaps more on that in a future blog. 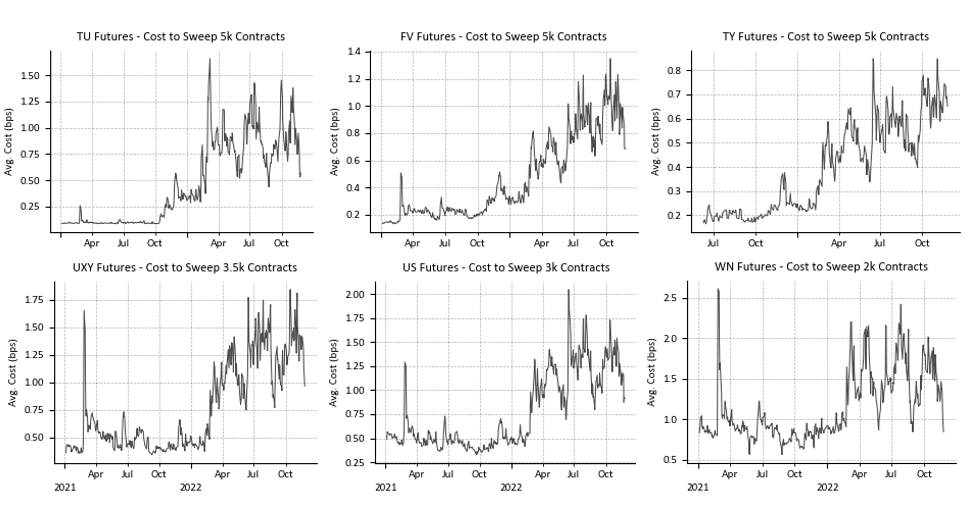 With bid/ask spreads wider and market depth lower, it would be natural to wonder what this has meant to overall volume (total amount of securities bought and sold per day) for the US Treasury market. Generally speaking, with deteriorating liquidity conditions, one could not be blamed for assuming that overall market volume might be lower. That said, when we look at volume, what we actually find is that it is generally in line with what we observed last year and even slightly elevated from 2020. While this might not have been one’s initial conclusion, it is curious, given all of the headlines highlighting the deteriorating liquidity conditions for this market, that volume actually appears to be fairly robust.

Having navigated all types of market conditions, we are left with the overwhelming feeling that liquidity for the US Treasury market remains manageable and very much in line with our expectations, considering the broader market volatility. Execution strategies and trading tactics, in some ways, have needed to adjust, but the notion that current liquidity conditions for the US Treasury market are increasingly dire, seems very misplaced to us; admittedly, this stance is slightly less interesting than headlines that would counter our conclusion. Do not mistake our current assessment with our vigilance to monitoring liquidity conditions as they are paramount to our investment process and incorporated every step of the way.

Look for future notes where we will take on additional aspects of market “liquidity.”

In 2022 we have seen both distress in corporate bond markets and significant monetary tightening. Global high yield credit factors outperformed the ICE BofA Global High Yield Index by 1.6% in Q2, building on the strong Q1 performance.