The economic importance of biodiversity: Threats and opportunities

Biodiversity—the world’s varied wildlife, plants and habitats—is bound up with the viability of human life, especially food production (both farming and aquaculture). Rising levels of pests, extinctions, habitat loss, heat waves, wildfires and other human impacts are harming biodiversity, including by diminishing soil and water quality, pollination and disease resistance around the world. Nature’s effectiveness as a carbon “sink” (storing C02) is also waning.

Limiting future C02 emissions will be paramount, as climate change is set to become the top threat to biodiversity—and investors have an important role to play. Emerging investment initiatives using new metrics will focus attention on ecosystem loss while nudging progress toward conserving and restoring biodiversity. Those companies working to improve biodiversity may present new investing opportunities.

Biodiversity (also called biological diversity): The variety of living things in a specified location—your backyard, a forest, a country, the Earth. What you can see (animals, plants, insects, fish) and what you can’t (bacteria, fungi).1

Ecosystems: Where the physical environment (water, nutrients, land, air) and organisms interact to sustain themselves. For ecosystems to be healthy, biodiversity is critical.

Ecosystem services: The direct and indirect benefits to humankind of biodiversity and ecosystems. These “services” include providing people with raw materials, creating conditions for income and mental and physical health (through tourism, recreation and enjoying nature) and regulating climate, water, pollution and disease.

Biodiversity has broad societal implications. First, in agriculture, biodiversity is necessary for crops’ productivity—even their viability. Biodiverse conditions mean ample pollinators, species variety (to avoid pests and disease) and soil and water quality. Biodiversity in marine ecosystems is critical because, for one, the ocean is an important source of food worldwide; fish account for 17% of global meat consumption.2 Coastal mangroves, wetlands and reefs reduce erosion and storm damage, filter runoff from land and serve as nurseries for fish.

Healthy natural environments also draw tourism, an economic engine for many countries. Biodiverse land and sea habitats are critical carbon sinks, too, historically pulling 59% of carbon dioxide emissions out of the atmosphere. These natural carbon sinks are projected to be less effective at slowing the accumulation of C02 in the atmosphere by the end of the century under medium and high emissions scenarios.3

What is the current state of biodiversity?

Globally, biodiversity has been declining. It continues to be threatened as the number of species and habitats shrinks. Between 1970 and 2016, wildlife populations declined by 68%.4 Extinction is also completely eliminating some species, creating irreversible biodiversity loss. Current extinction rates are 100 times baseline rates, an order of magnitude that qualifies as a mass extinction event (Exhibit 1).

Extremely fast biodiversity loss consistent with mass extinction is underway with accelerated human land use and ocean use
Exhibit 1: Trends in global extinction rates and land use 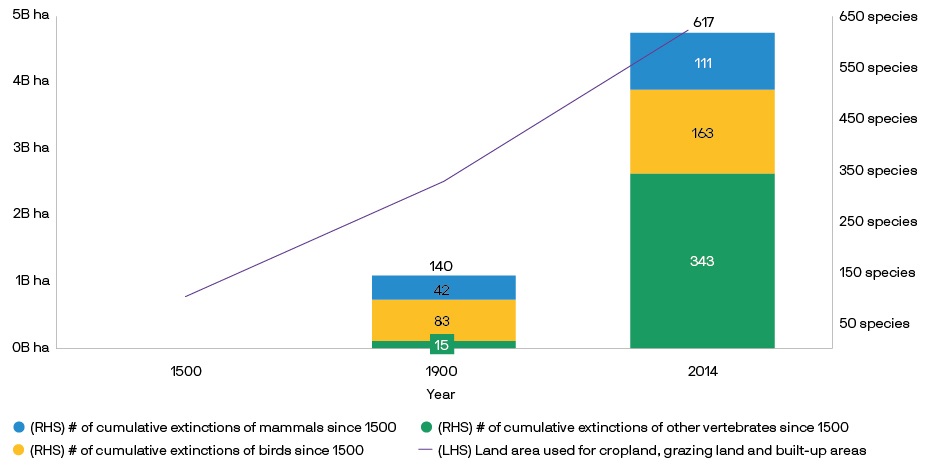 Many schoolchildren have learned about the dodo bird in Mauritius, which went extinct in 1681 due to overharvesting, loss of habitat from land use changes and competition from invasive species. Today, there are five main threats to global biodiversity, here ranked by their negative impact (Exhibit 2).9

Biodiversity, which has broad social and economic importance, is threatened from many quarters
Exhibit 2: Five main threats to biodiversity 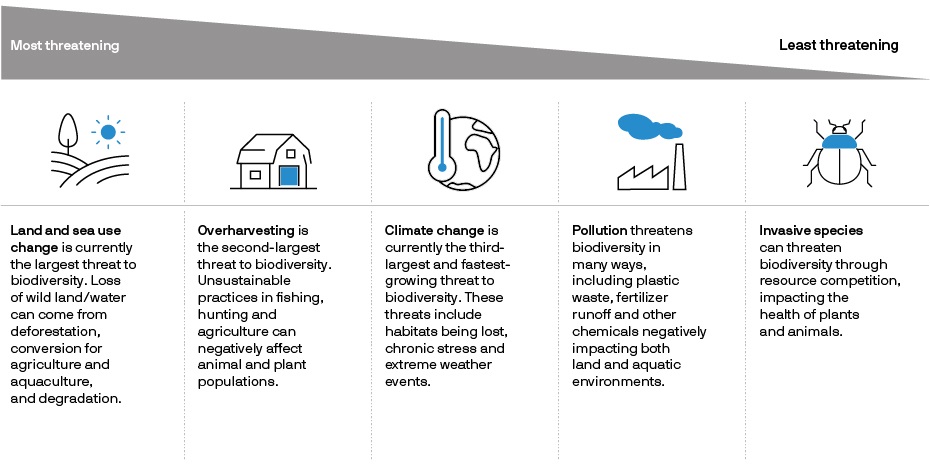 Source: Intergovernmental Science-Policy Platform on Biodiversity and Ecosystem Services; data as of 2019.

How does climate change affect biodiversity and vice versa?

Climate extremes: Heat waves on land or in the water, wildfire and drought.

Over the next century, climate change will become the top threat to biodiversity on its own and as a threat multiplier, worsening other forces and making ecosystems less resilient.11

In a steady climate, ecosystems adapt to ambient conditions of temperature, water availability and seasons. A changing climate alters the key conditions that species and ecosystems need to thrive, leading to shifts in where species reside and in the structure of ecosystems. Eventually, climate change can cause ecosystems to cross over tipping points: thresholds that, once surpassed, lead to irreversible loss. Some regions are more at risk due to the physical restrictions on migration for species, leading to local extinctions (Exhibit 3).

Biodiversity hot spots are the most at risk from climate change
Exhibit 3: Plant and animal species threatened with extinction (%) by type of environment

Source: Intergovernmental Panel on Climate Change (IPCC); data as of 2022. Risk level is derived from analysis across all time periods and scenarios.

Investing metrics: How can investors track their portfolios’ impact on biodiversity?

Tracking whether and how much an investment is impacting climate change mitigation is reasonably easy, using issuers’ reductions in C02 emissions and their equivalents. Tracking the impact of biodiversity initiatives is more complicated, however, and requires a multitude of metrics, depending on the desired impact. Investors can track either biodiversity enhancement or progress toward reducing biodiversity threats.

Enhancing biodiversity: Emerging technologies are leveraging satellite or lidar (light detection and ranging, comparable to radar using lasers) monitoring of land cover and habitats, along with machine learning. These allow for tracking deforestation on land, in mangrove forests on shores and other aspects of ecosystem health globally. Sustainable agriculture can improve soil and local ecosystem health while increasing productivity per unit of land or water and can be tracked with sensors, satellite data and production metrics.

New financial accounting and capital structures are also being developed. They look to incorporate ecosystems into “nature asset companies” focused on reporting their ecosystem services metrics. Reporting would draw on scientific assessments of these companies’ impact and value, as well as their natural carbon sequestration and financials.13, 14

Reducing threats to biodiversity: Monitoring whether an investment is reducing threats to biodiversity is another tangible way to track an investment’s impact on biodiversity through time. Pollution and waste can be subjected to monitoring to understand a company’s, or government issuer’s, operational impact. In agriculture, this can include fertilizer use and runoff. A major danger across multiple sectors is plastic production. The majority of plastics manufactured to date have been discarded; only 8% have been recycled, and 24% are still in use (Exhibit 4).

Most of the plastics ever made persist, threatening biodiversity, particularly in oceans

About one-third of all discarded plastic is located within 50 kilometers (km) of a coast, where it’s at risk of entering and disrupting the oceans. Mismanaged plastic waste can enter waterways and the ocean, floating and degrading over time into smaller pieces that cloud the water and are eaten by fish (Exhibit 5).16 Such coastal waste threatens the health of the marine ecosystem—the shore and ocean are crucial spots where water, nutrients, land and air interact to sustain important plant and animal life. Plastic waste can harm or kill marine animals when they are entangled in or consume it.

Plastics in the ocean threaten the biodiversity of marine ecosystems
Exhibit 5: How plastic enters the world's oceans 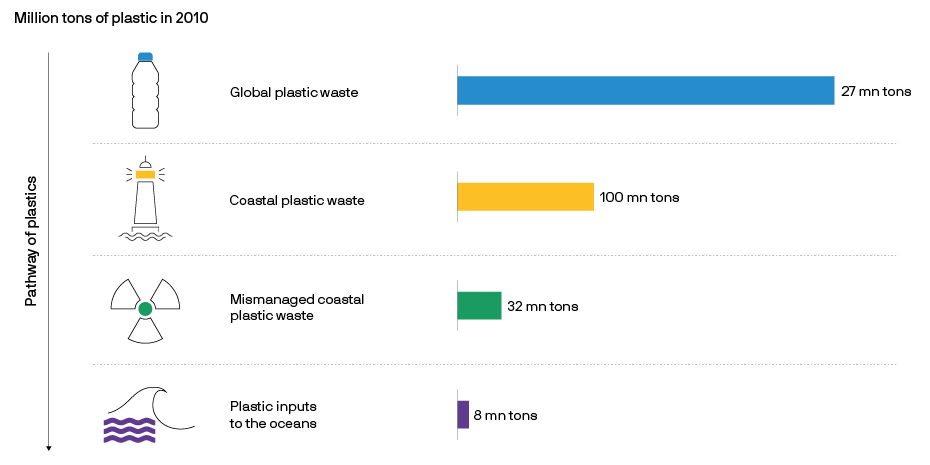 How could biodiversity considerations affect investors?

The risk of continued biodiversity loss is profound not just for nature but for financial stability. The issue has caught the attention of, among others, the Network of Central Banks and Supervisors for Greening the Financial System, whose recently released statement said: "Biodiversity loss could have significant microeconomic implications. Failure to account for, mitigate and adapt to these implications is a source of risks relevant for financial stability."18

As is the case with climate change, biodiversity loss poses two major risks to the financial system:

Global commitments have already been made to combat climate change and preserve biodiversity. In the lead-up to COP26, the annual United Nations climate conference, in 2021, several countries made “30 x 30” pledges: to conserve 30% of their lands and waters by 2030. At the 2021 meeting, more than 100 countries agreed to end and reverse deforestation by 2030.

Another gathering, the June 2021 Group of 7 meeting, ended with member countries adopting a the 2030 Nature Compact. It covers conservation, ending deforestation, reducing marine litter and halting the illegal trade in wildlife. And at the March 2022 United Nations Environment Assembly (UNEA-5) in Nairobi, attendees made an agreement to restrict plastic waste, with a goal of developing an internationally binding treaty by 2024.

1 It can also more broadly refer to differences in the genetic diversity of individual species, but for our purposes here, we will focus on living organisms.

3 Under high emissions scenarios, this could reduce to 38%. Intergovernmental Panel on Climate Change, “Climate Change 2021: The Physical Science Basis,” Working Group I Contribution to the Sixth Assessment Report of the IPCC, 2021.

11 Cristian Román-Palacios and John J. Wiens, “Recent responses to climate change reveal the drivers of species extinction and survival,” Proceedings of the National Academy of Sciences 117, no. 8 (February 2020): 4211–4217.

18 NFGS-Inspire Study Group on Biodiversity and Financial Stability, “Central banking and supervision in the biosphere: An agenda for action on biodiversity loss, financial risk and system stability,” March 2022.

Investing on the basis of sustainability/ESG criteria involves qualitative and subjective analysis. There is no guarantee that the determinations made by the adviser will align with the beliefs or values of a particular investor. Companies identified by an ESG policy may not operate as expected, and adhering to an ESG policy may result in missed opportunities.