Amid weakening data, policy easing to be expected in China

With more accommodative policies, the growth outlook may stabilize, and investor sentiment can improve.

The trend of slowdown continued in China’s economy, with a year-over-year (yoy) real GDP growth of 4.0% reported for 4Q2021 (3Q2021: 4.9% yoy, consensus: 3.8% yoy), while last year’s annual growth reached 8.1%, fulfilling the 6% goal. That said, the below-trend growth has raised some concerns about China’s short-term economic stability, with Beijing expected to step up fiscal and monetary stimulus, including the latest 10bps policy rate cut announced on January 17.

Monthly economic activity indicators pointed to a weak domestic demand. Fixed asset investment continued to decelerate, expanded only 4.9% yoy in 2021 (5.2% yoy growth for the period of January to November). Despite the policy easing in property market, real estate investment remained the major drag on investment growth. In December, real estate investment declined 13.1% yoy per our estimate based on the data from the National Bureau of Statistics, which reflected weak investment sentiment. On the other hand, strong export performance support manufacturing investment, with a growth rate of 11.3% yoy for the whole year.

Consumer sentiment was also subdued, as retail sales only grew by 1.7% yoy in December (November: 3.9% yoy). The resurgence of regional COVID-19 outbreak and lockdowns, as well as supply bottlenecks in the automobile industry, all weighed on consumption.

In contrast, China’s external sectors remained in good shape. China’s exports rose by 20.9% yoy in December, beyond the market expectations of 18.2%. A rebound in demand from developed markets coupled with the sluggish recovery in Southeast Asian exporters were driving this growth. Although strong exports served as a key growth stabilizer, there are concerns on the sustainability as growth peaked in the developed economies and supply chains were expected to be restored in Southeast Asia. 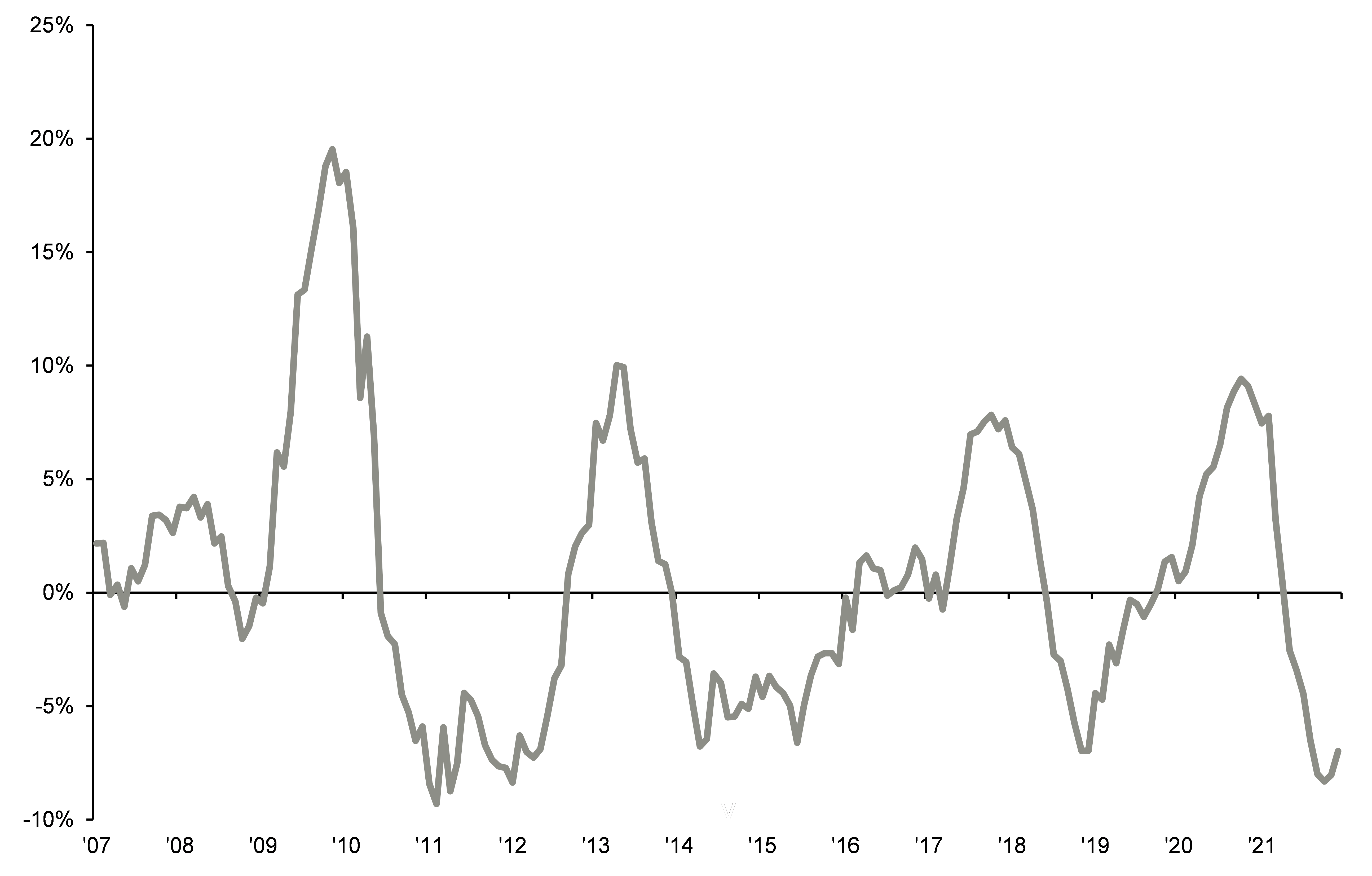 Although the 8.1% GDP growth in 2021 has exceeded the annual growth target, recent economic data pointed to mounting pressure on growth. The Central Economic Work Conference in December 2021 signalled a shift to accommodative policies to restore economic stability, and the People's Bank of China has already announced 50bps RRR cut and 5bps LPR cut last month. On January 17, additional 10 bps rate cuts was announced for MLF and reverse repo, two major policy tools by the central bank.

However, credit growth, particularly bank lending to the private sector, has not rebounded significantly after these easing measures. This suggests that business confidence has not been restored and banks are cautious to extend credit, therefore further policy easing at a longer time horizon is essential. Further cut to one-year LPR is one of the most possible moves, and additional cut to five-year LPR might be necessary in 2Q2022. In addition, the accelerating issuance of local government special bonds should lend some support to investment in 1H2022. With these policies in sight, China’s growth outlook may stabilize, and a 5% GDP growth may be achievable in 2022.

In line with the weak economic indicators, Chinese stock market has also seen correction during recent weeks. With more accommodative policies, the growth outlook may stabilize, and investor sentiment can improve. Sector rotation may be led by cyclical sectors when domestic investment is supported by government projects. Consumer sectors may also outperform when CPI inflation rebounds and sector leaders raise product prices. However, challenges remain in both domestic and overseas markets, therefore it is important for investors to stay diversified in their portfolios with a focus on quality companies. Over the longer-term investment horizon, we see attractive investment themes including carbon neutralization and self-sufficiency in key technologies, although investors need to remain patient and selective amid market volatility.