Do investors need to worry about a Japanese-style stagnation in Europe?

Japan’s problematic debt situation in the 1990s was significantly worse than in the eurozone.

Slow growth, an ageing population, a central bank fighting deflation, and ballooning government debt are usually associated with Japan’s economic difficulties of the past 30 years.

Growing populations are a key ingredient for robust economic growth. Like Japan, Europe faces headwinds from an ageing society and a shrinking workforce. Japan’s working population has been shrinking since 1993; the eurozone’s working population started to decline in 2009, with the trend expected to accelerate in the coming years. A declining workforce is putting downward pressure on aggregate demand and on government tax receipts, challenging the funding of the pension and social security system.

The dependency ratio – the ratio of older dependents to working-age population – is a useful proxy for the pay-as-you-go pension financing needs of a country. A higher ratio means that more retirees need to be financed by relatively fewer working people. In Japan, the dependency ratio increased from 16% in 1988 to 46% in 2018, and is expected to rise to 78% over the next thirty years. In the eurozone, the dependency ratio is currently 32% and is expected to increase to 53% over the same period (see charts below). Lowering the pension age – as we have recently seen in Germany and Italy – will compound these pension funding problems.

However, while the nature of the demographic challenge is the same, the magnitude is not. While the working-age population has been falling in Japan for much longer than in the eurozone, it is also expected to continue to fall – and at a faster rate – over the next 20 years. The UN expects a 0.8% annual decline in working people in Japan between 2020 and 2040, compared to a 0.5% decline for the eurozone. The drag on European GDP growth should therefore be less severe. Our latest 10-15 year real growth assumptions, from our 2020 Long-Term Capital Market Assumptions, are 1.2% for the eurozone and 0.6% for Japan.

Slower GDP growth expectations in Japan will not help to ease the pressure of rising government debt to GDP. In the eurozone, the combination of the lower current debt to GDP ratio and the higher expected GDP growth rate means that the debt burden is nowhere near as large in Europe as it is in Japan (see chart below).

Gross debt as a % of nominal GDP 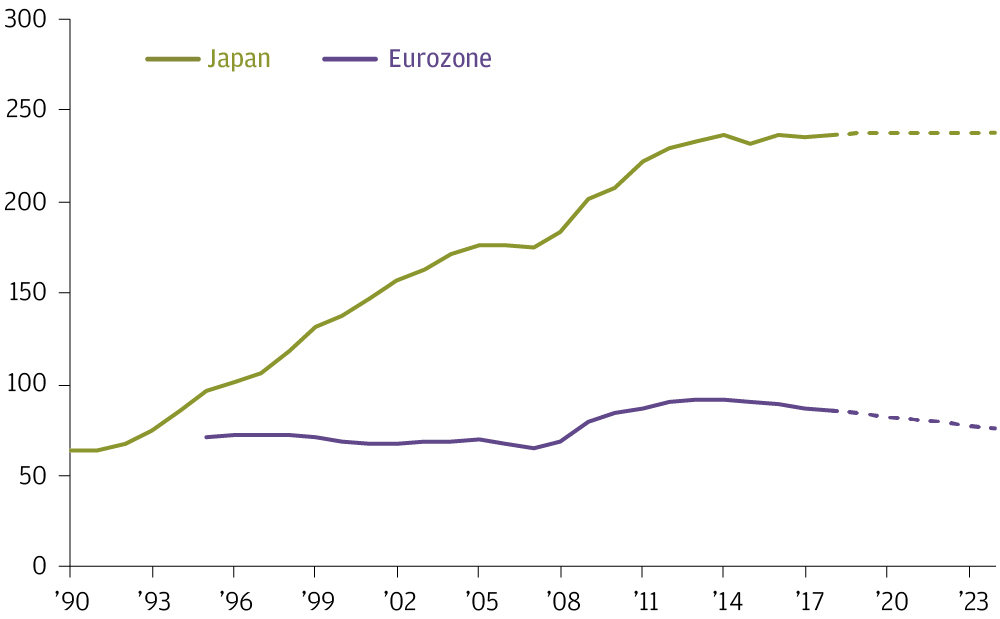 Source: IMF, J.P. Morgan Asset Management. Data from 2019 onwards are IMF forecasts from the IMF fiscal monitor. Past performance is not a reliable indicator of current and future results. Data as of 31 December 2019.

Banking troubles – but a smaller magnitude

In both regions, the banking sector was at the epicentre of the initial crises. Japanese banks entered the crisis in the nineties highly levered and with an unhealthy dependence on capital market financing rather than local deposits. Japanese banks financed an epic real estate and asset bubble. In Europe, bank balance sheet risk had several causes, including local real estate bubbles in Spain and Ireland, increased private sector leverage, and rising government debt in countries with already high debt levels.

However, the similarities end when we look at the size of the credit problem. Japan’s problematic debt situation in the 1990s was significantly worse than in the eurozone. At its peak, private non-financial sector credit ballooned to a gigantic 220% of GDP, compared to a peak credit expansion of 170% of GDP in Europe (see charts below). Why is the size of the credit bubble so relevant? Because it helps to understand why the deleveraging process for the Japanese economy lasted longer, was more deflationary and was more expensive to overcome. At their respective peaks, non-performing loans in Japan reached 35% of total loans, compared to 8% in the eurozone.

As a result, Japan took 14 years to restart loan growth. In contrast, loan growth stabilised more quickly in the eurozone, likely helped by the more speedy response from the European Central Bank (ECB) through policy rate cuts, liquidity support for the banks (in the form of the longer-term refinancing obligations (LTROs)), and the broader quantitative easing programme (see chart below). 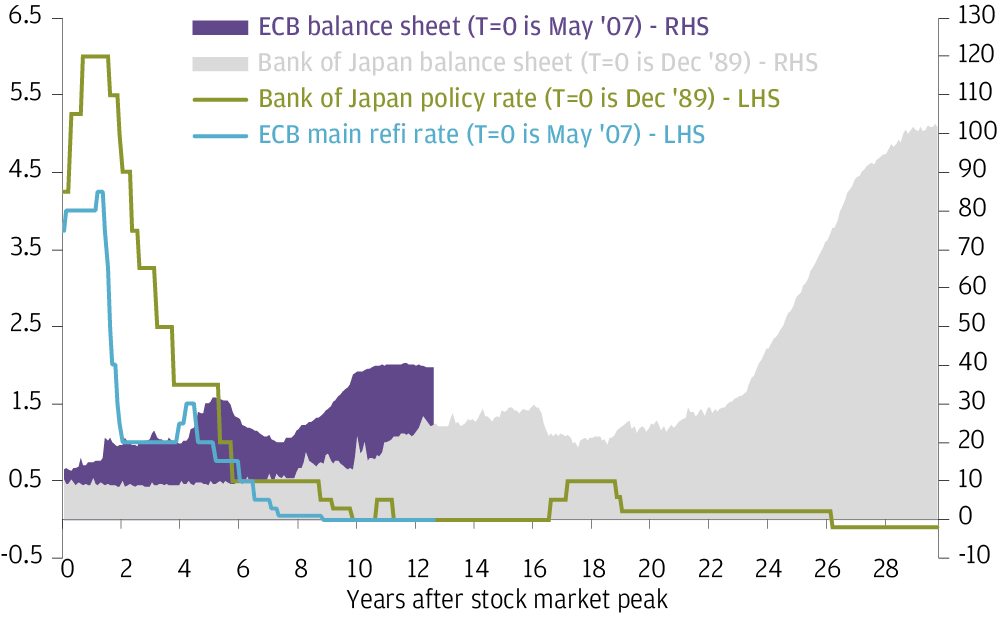 Source: Bank of Japan, European Central Bank, J.P. Morgan Asset Management. Japan T=0 is Dec 1987 and eurozone T=0 is May 2007, which are the respective stock market peaks (TOPIX for Japan and MSCI Europe for eurozone). Past performance is not a reliable indicator of current and future results. Data as of 31 December 2019.

The ECB’s efforts have not been sufficiently successful for us to conclude that interest rates will rise any time soon. ‘Lower for longer’ is likely to remain the key theme in both Europe and Japan, as both central banks seek to lift inflation. In the eurozone, successful implementation of structural reforms, further harmonisation of financial markets, and looser fiscal policy are all prerequisites for a material uplift in nominal growth, which would alter the interest rate outlook.

However, all look unlikely at this stage. Government debt has stabilised in the eurozone, helped by lower interest rate costs. But, despite increasingly vocal pleas from the new ECB president, Christine Lagarde, a significant fiscal push looks unlikely because of the fiscal constraints set by the European Commission’s Stability and Growth Pact. The few countries that do have fiscal room, such as Germany, have little political appetite for fiscal expansion.

With European fixed income yields having taken a similar path to their Japanese counterparts, does the European equity market face a similar fate? As in Japan, the financial sector dominated the European equity index heading into the crisis. Therefore, as the crisis evolved, European equities suffered significantly more than other developed markets. But this is where the similarities with the Japan of the 90s end.

Japanese equities were valued at 49x earnings at the peak of the TOPIX index in December 1989, compared to a multiple of 14x at the peak of the MSCI Europe index in May 2007. In both regions, earnings contracted sharply in the first two years after the peak, but European companies were more successful in recovering their earnings power (see charts below). There are two reasons for that. First, writedowns by European banks were smaller than in Japan. Second, European companies reacted more aggressively with cost-cutting measures than their Japanese counterparts, with the unemployment rate in the eurozone peaking five years after the beginning of the stock market decline, compared to 12 years in Japan.

The eurozone faces some of the structural macroeconomic challenges that have limited Japanese growth in the past three decades. But investors would be wise to not oversimplify the similarities. In our view, Japanese equity performance during the market’s lost decades is not the blueprint for European stocks.