UK valuations aren’t just cheap when compared with other markets. They are also below their long-run average valuation since 1990.

With UK share prices looking cheap compared to other markets and compared to their long-run history, long-term investors could pick up a bargain in the UK stock market, and benefit from an attractive dividend income too.

Despite a rapid rebound in activity from the Covid-19 shutdowns, the UK economy still has plenty of room for further recovery in the coming year. Consensus forecasts are for real GDP growth of over 5% in 2022. Consumers, in aggregate, are still sitting on significant accumulated savings that they weren’t able to spend during the pandemic. While some are worse off, overall, we estimate that UK consumers have saved around 10% of GDP more than they normally would have since the start of 2020.

In sharp contrast to the last recession, house prices have risen by 15% since the start of 2020, meaning that the 65% of households who own a home feel richer. While rapidly rising house prices have sometimes in the past been a warning sign that the economy was approaching a housing bust, we think that is unlikely in the next few years.

The recent housing boom has been driven by what we believe to be a permanent shift in working arrangements, with many people now working from home for at least some of the week. This shift has boosted demand for larger properties, as people want more space, while the number of homes available for sale is close to the lowest on record, pushing up prices.

Low interest rates also provide strong support for the UK economy. Low rates mean the percentage of the nation’s income being spent on paying mortgages and other debt is far below the levels that caused problems in 2008. In addition, 35% of households now own their home without a mortgage, and of the 30% who own with a mortgage, about half of them have fixed their mortgage for five years or more. All this means that even when interest rates rise, it is likely to be several years before it causes a problem for the economy or the housing market.

The greatest uncertainty facing the UK consumer outlook is around the effect that the ending of the furlough scheme will have on unemployment. At the end of July there were 1.6 million people on furlough, but only about half of those were on full furlough with the rest working at least part of their pre-pandemic hours. Adzuna data suggests there are at least 1.2 million job adverts currently listed in the UK. So, it is quite likely that many of those who end up losing their job once the furlough scheme ends will be able to find work, although skills mismatches may slow this process down.

Along with the healthy consumer backdrop, UK business surveys that have historically been a good indicator of the outlook for business investment have improved sharply over the last year. The two key drivers of the economy, consumer and business spending, are therefore expected to continue to support UK economic growth through 2022.

Against this strong economic backdrop, one might expect UK share prices to already be pricing in a lot of good news. However, UK shares actually look cheap on several measures. The FTSE all share currently trades at a near record valuation discount to the MSCI World Index and is the cheapest it has been relative to this broad developed market equity universe since the dot com bubble.

Part of the reason that UK equities are cheap is that they have a much smaller weighting to tech companies than some other markets, particularly the US. So the UK market may appeal to those investors who are worried about the valuations of global technology companies, which are currently elevated compared with history.

The UK market also has a larger weighting than most other markets to cheaper sectors like energy, materials and financials. However, it’s not just the sector composition of the UK market that makes it cheap, even within sectors, UK stocks are generally cheaper than in other markets. 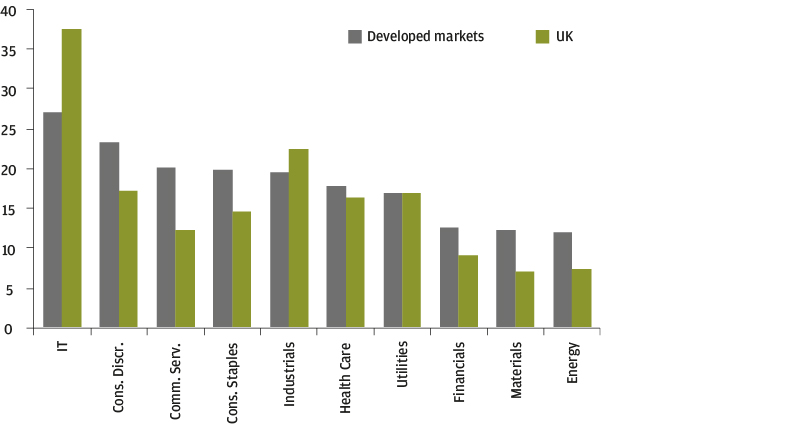 UK valuations aren’t just cheap when compared with other markets. They are also below their long run average valuation since 1990. And with interest rates on savings accounts and government bonds still extremely low by historical standards, UK equities also offer an attractive source of dividend income. The current dividend yield of 4.1% on the FTSE 100 is the highest of the major developed markets.

Nevertheless, cheap UK valuations haven’t gone unnoticed. Merger & acquisition deal activity in the UK has been higher as a percentage of market cap than in any of the other developed markets this year. Companies and private equity firms, flush with money to deploy, are increasingly looking at the attractive valuations on offer in the UK with interest.

While UK equity valuations could be boosted by further deal activity, or by a reversal of some of the equity outflows seen over the last five years, the UK market could still make gains even if valuations don’t rise from here. As the economy continues to recover, corporate profits should rise. Ultimately, it’s this earnings growth that should be able to drive UK equities higher over the coming years.

For the purposes of MiFID II, the JPM Market Insights and Portfolio Insights programs are marketing communications and are not in scope for any MiFID II / MiFIR requirements specifically related to investment research. Furthermore, the J.P. Morgan Asset Management Market Insights and Portfolio Insights programs, as non-independent research, have not been prepared in accordance with legal requirements designed to promote the independence of investment research, nor are they subject to any prohibition on dealing ahead of the dissemination of investment research. This document is a general communication being provided for informational purposes only. It is educational in nature and not designed to be taken as advice or a recommendation for any specific investment product, strategy, plan feature or other purpose in any jurisdiction, nor is it a commitment from J.P. Morgan Asset Management or any of its subsidiaries to participate in any of the transactions mentioned herein. Any examples used are generic, hypothetical and for illustration purposes only. This material does not contain sufficient information to support an investment decision and it should not be relied upon by you in evaluating the merits of investing in any securities or products. In addition, users should make an independent assessment of the legal, regulatory, tax, credit, and accounting implications and determine, together with their own financial professional, if any investment mentioned herein is believed to be appropriate to their personal goals. Investors should ensure that they obtain all available relevant information before making any investment. Any forecasts, figures, opinions or investment techniques and strategies set out are for information purposes only, based on certain assumptions and current market conditions and are subject to change without prior notice. All information presented herein is considered to be accurate at the time of production, but no warranty of accuracy is given and no liability in respect of any error or omission is accepted. It should be noted that investment involves risks, the value of investments and the income from them may fluctuate in accordance with market conditions and taxation agreements and investors may not get back the full amount invested. Both past performance and yields are not a reliable indicator of current and future results. J.P. Morgan Asset Management is the brand for the asset management business of JPMorgan Chase & Co. and its affiliates worldwide. To the extent permitted by applicable law, we may record telephone calls and monitor electronic communications to comply with our legal and regulatory obligations and internal policies. Personal data will be collected, stored and processed by J.P. Morgan Asset Management in accordance with our privacy policies at https://am.jpmorgan.com/global/privacy. This communication is issued by the following entities: In the United States, by J.P. Morgan Investment Management Inc. or J.P. Morgan Alternative Asset Management, Inc., both regulated by the Securities and Exchange Commission; in Latin America, for intended recipients’ use only, by local J.P. Morgan entities, as the case may be.; in Canada, for institutional clients’ use only, by JPMorgan Asset Management (Canada) Inc., which is a registered Portfolio Manager and Exempt Market Dealer in all Canadian provinces and territories except the Yukon and is also registered as an Investment Fund Manager in British Columbia, Ontario, Quebec and Newfoundland and Labrador. In the United Kingdom, by JPMorgan Asset Management (UK) Limited, which is authorized and regulated by the Financial Conduct Authority; in other European jurisdictions, by JPMorgan Asset Management (Europe) S.à r.l. In Asia Pacific (“APAC”), by the following issuing entities and in the respective jurisdictions in which they are primarily regulated: JPMorgan Asset Management (Asia Pacific) Limited, or JPMorgan Funds (Asia) Limited, or JPMorgan Asset Management Real Assets (Asia) Limited, each of which is regulated by the Securities and Futures Commission of Hong Kong; JPMorgan Asset Management (Singapore) Limited (Co. Reg. No. 197601586K), this advertisement or publication has not been reviewed by the Monetary Authority of Singapore; JPMorgan Asset Management (Taiwan) Limited; JPMorgan Asset Management (Japan) Limited, which is a member of the Investment Trusts Association, Japan, the Japan Investment Advisers Association, Type II Financial Instruments Firms Association and the Japan Securities Dealers Association and is regulated by the Financial Services Agency (registration number “Kanto Local Finance Bureau (Financial Instruments Firm) No. 330”); in Australia, to wholesale clients only as defined in section 761A and 761G of the Corporations Act 2001 (Commonwealth), by JPMorgan Asset Management (Australia) Limited (ABN 55143832080) (AFSL 376919). For all other markets in APAC, to intended recipients only. For U.S. only: If you are a person with a disability and need additional support in viewing the material, please call us at 1-800-343-1113 for assistance. Copyright 2022 JPMorgan Chase & Co. All rights reserved.