The first hike in over a decade

As one of the last major central banks to keep base rates unchanged, the dichotomy between negative interest rates and record high inflation weighed increasingly heavily on the ECB. To assuage market and member country concerns, as recently as the June governing council meeting, President Lagarde confirmed forward guidance of a small rate hike in July followed by a larger hike in September.

In actuality, the ECB surprised the market with a larger, 50bp rate hike across the board. The deposit facility rate was increased to 0.00%, the refinancing rate was lifted to 0.50% and the marginal lending facility was elevated to 0.75%.

The catalyst for the larger than expected rate hike was “based on the Governing Council’s updated assessment of inflation risks”, which have intensified since the ECB’s June meeting, with headline inflation reaching a new record high at 8.6% (Fig 1) in June. While this increase is largely attributed to energy and food price jumps, as a consequence of the Ukraine invasion, there is evidence that price increases are broadening. In addition, with unemployment rate falling to a new record low of 6.6% (Fig. 2), there are growing signs of upward pressure on pay settlements (Fig 1). Finally, there was also acknowledgement that the recent weakness in the currency could add to inflationary pressures. 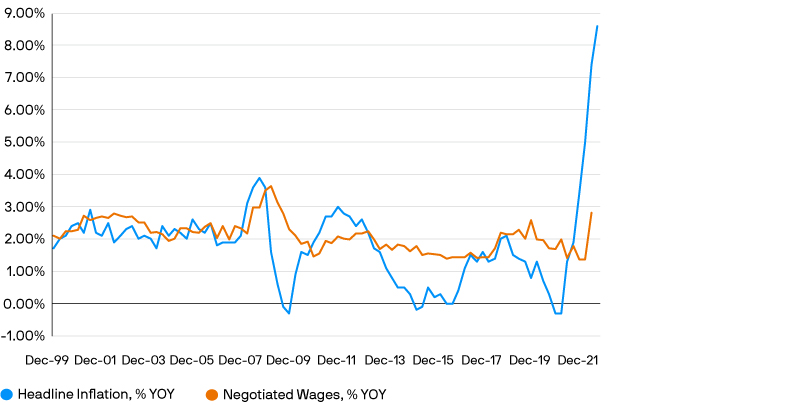 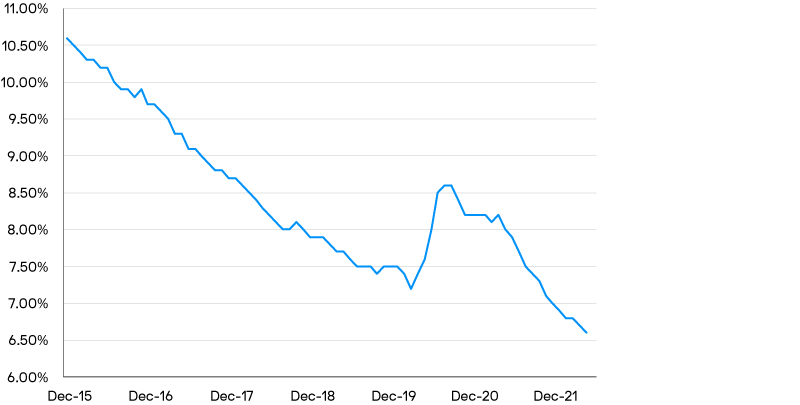 With many market participants believing the ECB has been slow to act, the bold move to start normalising rates was deemed necessary in order to anchor inflation expectations and adjust demand conditions to reach the Bank’s medium-term inflation target.

A new Transmission Protection Instrument was also announced to “support the effective transmission of monetary policy” and “ensure that the monetary policy stance is transmitted smoothly across all euro area countries”. Effectively, the instrument will allow the central bank to selectively intervene in secondary bond markets to counter "unwarranted, disorderly market dynamics” with the scale of purchases dependent on the severity of risks to monetary policy.

The creation of the TPI and the support it will lend to the effective transmission of monetary policy was used as further justification for the larger rate hike.

While the ECB is clearly attentive to the downside risks to growth and persistent uncertainty that the Ukraine conflict bestows upon the region, its press release confirmed that “further normalisation of interest rates will be appropriate”.

Subsequent comments by President Lagarde suggest that prior guidance for a September rate hike no longer applies. Instead, the ECB believes that “frontloading today… allows the Governing Council to make a transition to a meeting-by-meeting approach to interest rate decisions” and the “future policy rate path will continue to be data-dependent and will help to deliver on its 2% inflation target over the medium term”.

The next official inflation forecasts in September will likely support another rate increase, although the magnitude remains uncertain. Nevertheless, the ECB has now pivoted decisively to shifting interest rates away from emergency levels to a higher, more neutral level.

Despite the risk of a pronounced economic slowdown increasing, the market believes further tightening will be frontloaded and currently just over 100bps of cumulative hikes for the remaining three meetings in 2022 are priced in, with an additional 25bps priced in total for the first half of 2023.

This is the first rate hike by the ECB in over 10 years and finally moves the deposit rate out of negative territory (Fig 3). For euro cash investors, the news that interest rates will be higher – and positive in the near future – will be warmly welcomed.

The yield on deposit and repo investments will step up on July 27 (the start of the next reserve period), however, with system wide liquidity still abundant, it remains to be seen whether commercial banks will pass on the full rate hike to depositors.

In anticipation of ECB rate hikes, the money market curve has risen significantly in recent months (Fig 4) and there is now ample opportunity to add positive yield. JPMorgan’s euro liquidity funds were well positioned for a front loaded ECB tightening cycle. While fund yields will move higher as they benefit from higher deposit rates and steeper yield curves, it will take a few weeks for reinvestment to fully catch-up. 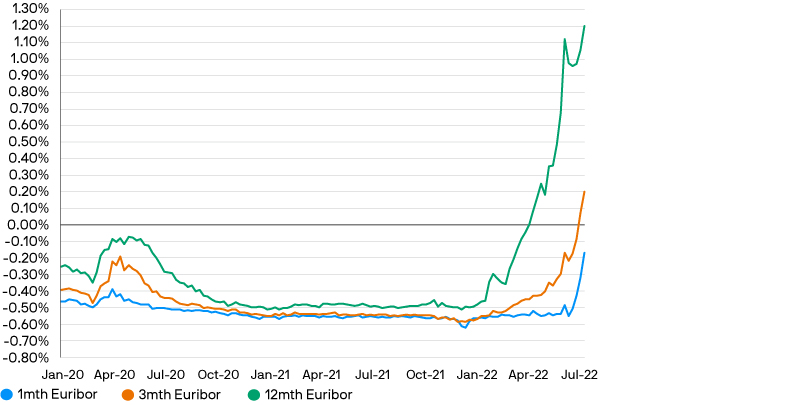 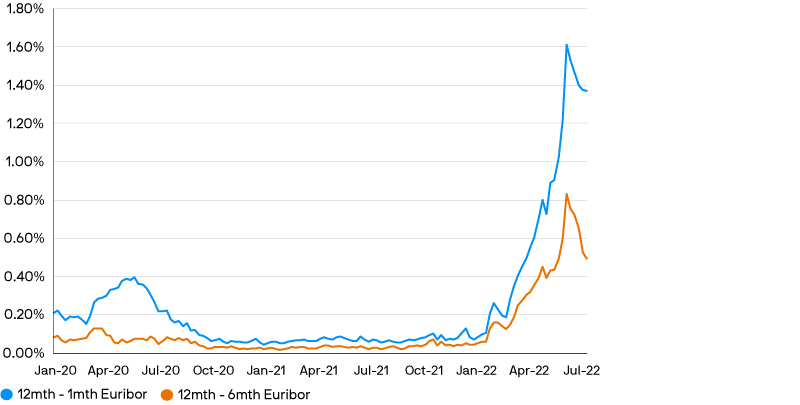 With further rate hikes likely against an opaque economic backdrop, we believe euro investors should take a cautious approach to cash management, ensuring sufficient diversification and laddering to optimise the balance of risk and return.