What are the implications of rising corporate bond defaults in China?

In recent weeks, the Chinese onshore bond market experienced large volatility, triggered by a wave of defaults by state-owned credit issuers. Two high-profile AAA issuers from the coal mining and auto sectors announced defaults of their maturing debts. This was then followed by a round of selloffs of similar bonds within the market. Some bond issuance plans were also cancelled or delayed, particularly in the energy sector.

These incidents have rocked investor confidence. Risk premium of state-owned enterprises (SOE) bonds has risen significantly, as investors reevaluate the underlying credit risks of those issuers. These bonds have traditionally been perceived as near risk-free due to implicit guarantees provided by their ultimate owners, the government. These incidents sparked concerns over government support towards the SOEs, especially for the weaker ones. The chain of defaults has also triggered questions about the reliability of local rating agencies in assessing risks, especially since a lot of them have investment grade credit ratings from domestic agencies.

The Chinese central government has stepped up interventions to restore market order and ease the worries of broader market contagion. At a recent conference, Liu He, China’s Vice Premier and Chairman of the Financial Stability and Development Committee, said China will show “zero tolerance” for misconduct in the bond market. It was also emphasized that bond issuers, their shareholders, financial institutions and intermediaries must strictly abide by laws, regulations and market rules, and guard against moral risks.

Besides the high-level declaration, the People’s Bank of China also started to inject funds into the market via mid-term liquidity facilities. This helped to provide liquidity and bring down the inter-bank relending rate, thereby stabilizing the bond market. 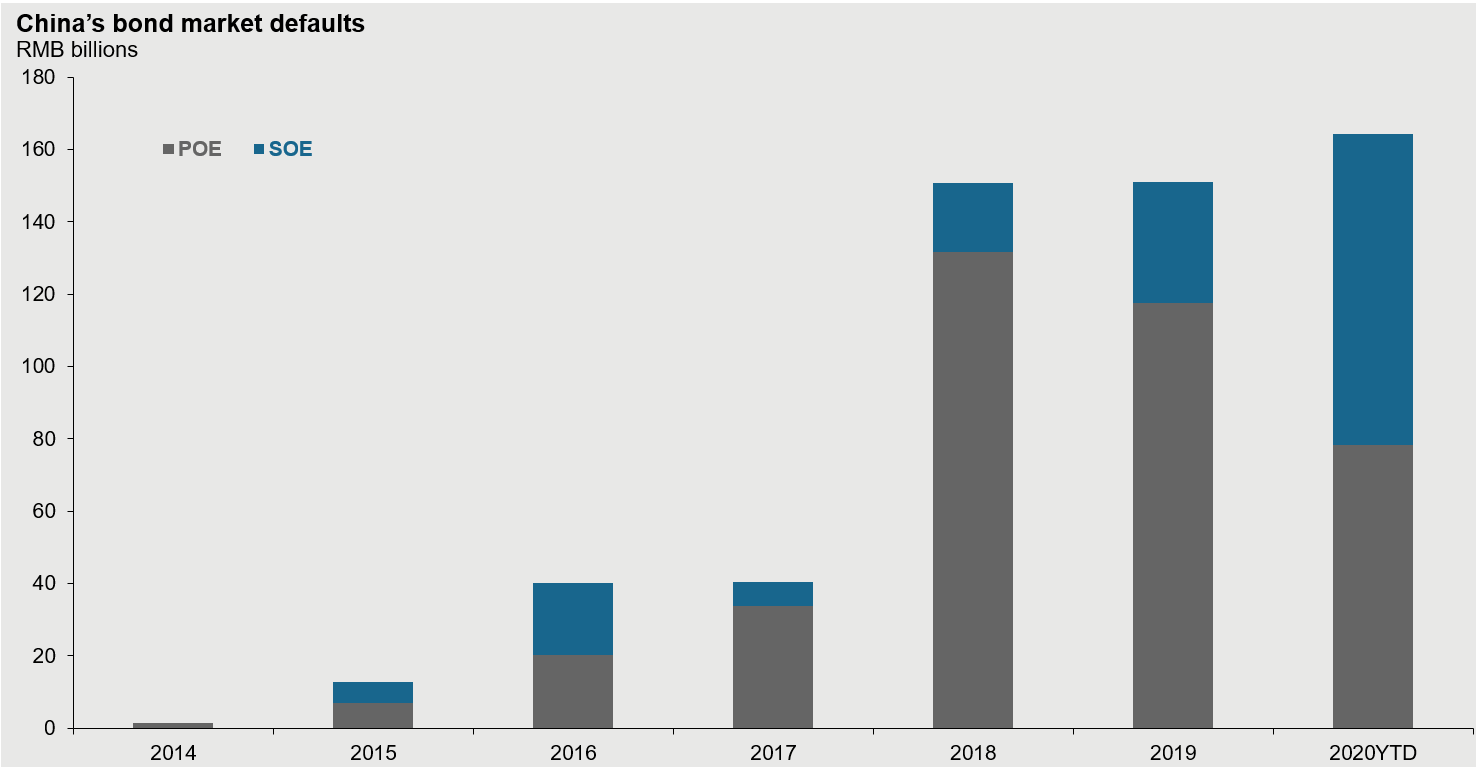 China’s onshore bond market has attracted continuous foreign inflows this year, given the high yields and low correlation with the rest of the world. However, given the generally limited liquidity in RMB-denominated onshore corporate bonds, overseas investors tend to focus on the debt issued by the government and quasi-sovereign bonds, such as those issued by policy banks, instead of those issued by SOEs.

Recent SOE defaults and market volatility suggest more real-time market pricing is being reflected in markets, which indicates a healthy long-term path towards more robust capital markets. Increasing credit differentiation is good for the long-term development of the Chinese market. It will incentivize companies to be more accountable for their cash flows and balance sheets, and for onshore credit ratings to reflect credit risks more properly. The price discovery mechanism will need to reflect this too.

Ultimately, that will mean investors should be properly rewarded for their exposure on a risk-adjusted basis. Investing in the Chinese corporate bond market will require active management and bottom-up research to fully understand the fundamentals of individual issuers. Investors need to be very selective in investing in local SOE bonds and may consider the following factors: 1) track record and willingness by the local government to fulfill their debt obligation; 2) financial strength of the local government; and 3) the issuer’s financial condition, including its funding cost, pledge ratio, and bank facility as a percentage of overall debt.